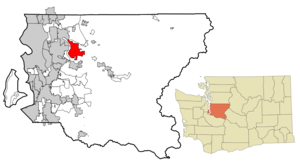 Sammamish is an Eastside suburb of Seattle, in King County, , . It was incorporated in . The population was 34,104 at the 2000 census.

The Sammamish Plateau was part of unincorporated King County for most of its history. A vote in to join neighboring Issaquah failed, as did a vote on incorporation the following year. A renewed movement to become a city, born of frustration with development policies set by the county government, met with voter approval in . Sammamish was officially incorporated on , .

Neighboring cities include Redmond to the north and Issaquah to the south.

Situated on the shores and hilly terrain east of , the city features a landscape of trees, mountains, and lakes. Other than , Beaver Lake and Pine Lake are the two biggest lakes in Sammamish.

There were 11,131 households out of which 53.3% had children under the age of 18 living with them, 79.5% were married couples living together, 5.3% had a female householder with no husband present, and 13.3% were non-families. 9.4% of all households were made up of individuals and 1.5% had someone living alone who was 65 years of age or older. The average household size was 3.06 and the average family size was 3.29.

and Issaquah's offer water recreation. Sammamish is a very green city, with views of the woods virtually everywhere. There are many hiking trails and scenic woods to enjoy around the housing developments. There are five major city parks: Beaver Lake Park, Pine Lake Park, NE Sammamish Park, East Sammamish Park, and . Parks being planned in the recently-incorporated city include Soaring Eagle Park and the Sammamish Commons. The , opened in April 2006, connects to a regional trail system. A is located across from .

The first phase of Sammamish Commons, a city center project comprising City Hall, recreation facilities, and a police station was opened in late 2006. Eventually, the King County Library System plans to relocate the current Sammamish Library to the site; in addition, the city government and YMCA have recently been in talks to construct a community center on the site.Fact|date=August 2007

Sammamish is home to two private golf clubs: the Plateau Club, and , which hosted the 1998 PGA Championship and the 2002 World Golf Championship-NEC Invitational.

The is a community orchestra founded on the Sammamish Plateau in 1994. It includes players from the town and surrounding players, and performs five concerts a year.Fact|date=January 2008

[http://www.sammamishcitizencorps.org/ Sammamish Citizens Corps] offers several interlinked community volunteer programs and events, including an active . The city encourages citizen involvement, emergency preparedness, strong neighborhood watch organizations, and volunteerism. is another local community service organization that is run primarily through local youth from the surrounding high schools. Its mission is to unite youth, adults and government to form a relationship that promotes equality and mutual respect, as well as to create integral activities that lead to a stronger community. In the past it has helped with events such as the Battle of the Bands, Spring Eggstravagnaza, and drive in movies. [http://www.ci.sammamish.wa.us/Group.aspx?ID=6]

The city uses King County Sheriff's office employees, dedicated to serve the city by contract, having 22 sworn officers in 2005. The city relies on the King County Jail and does not have its own detention center. [ [http://www.ci.sammamish.wa.us/files/document/2527.pdf City of Sammamish Police-Service Efforts and Accomplishments: 2004 ] ]

The city is part of two school districts: (LWSD for short) serves northern Sammamish and (ISD for short) serves southern Sammamish. There are two high schools, Eastlake High School of the LWSD and Skyline High School of ISD exist within the city limits, as well as three middle/junior high schools such as Inglewood Junior High, and nearly a dozen elementary schools such as , , and . Also, the Pacific Cascade Freshman Campus opened at the start of the 2006-2007 school year in ISD, making it the second Freshman Campus in the state of Washington. Fact|date=March 2007

moved to its newly-constructed Sammamish campus in September 2008, with the addition of grade 6-8.Fact|date=March 2007

With service provided both by and , some areas of Sammamish are served by three bus routes that provide access to other Eastside cities and .

Also, five -to- Route 554 buses per evening during the week continue on to South Sammamish P&R (normally it ends at Issaquah Highlands P&R).