Asteroid 775 Lumière is named in their honour.

The Lumière brothers were born in Besançon, France, in 1862 and 1864, and moved to Lyon in 1870, where both attended La Martiniere, the largest technical school in Lyon.[3] Their father, Claude-Antoine Lumière (1840–1911), ran a photographic firm and both brothers worked for him: Louis as a physicist and Auguste as a manager. Louis had made some improvements to the still-photograph process, the most notable being the dry-plate process, which was a major step towards moving images.

It was not until their father retired in 1892 that the brothers began to create moving pictures. They patented a number of significant processes leading up to their film camera, most notably film perforations (originally implemented by Emile Reynaud) as a means of advancing the film through the camera and projector. The cinématographe itself was patented on 13 February 1895 and the first footage ever to be recorded using it was recorded on March 19, 1895. This first film shows workers leaving the Lumière factory.

The Lumières held their first private screening of projected motion pictures in 1895.[4] Their first public screening of films at which admission was charged was held on December 28, 1895, at Salon Indien du Grand Café in Paris. This history-making presentation featured ten short films, including their first film, Sortie des Usines Lumière à Lyon (Workers Leaving the Lumière Factory).[5] Each film is 17 meters long, which, when hand cranked through a projector, runs approximately 50 seconds.

It is believed their first film was actually recorded that same year (1895)[6] with Léon Bouly's cinématographe device, which was patented the previous year. The cinématographe — a three-in-one device that could record, develop, and project motion pictures — was further developed by the Lumières.

The public debut at the Grand Café came a few months later and consisted of the following ten short films (in order of presentation):[1]

The Lumières went on tour with the cinématographe in 1896, visiting Bombay, London, Montreal,New York and Buenos Aires.

The moving images had an immediate and significant influence on popular culture with L'Arrivée d'un Train en Gare de la Ciotat (literally, "the arrival of a train at La Ciotat", but more commonly known as Arrival of a Train at a Station) and Carmaux, défournage du coke (Drawing out the coke). Their actuality films, or actualités, are often cited as the first, primitive documentaries. They also made the first steps towards comedy film with the slapstick of L'Arroseur Arrosé. 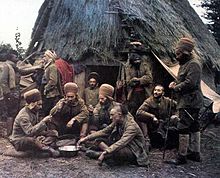 The brothers stated that "the cinema is an invention without any future" and declined to sell their camera to other filmmakers such as Georges Méliès. This made many film makers upset. Consequently, their role in the history of film was exceedingly brief. They turned their attentions to colour photography and in 1903 they patented a colour photography process, the "Autochrome Lumière", launched on the market in 1907. Throughout much of the 20th century, the Lumière company was a major producer of photographic products in Europe, but the brand name, Lumière, disappeared from the marketplace following its merger with Ilford.

The Lumières also developed other products such as a loudspeaker, "Lumière tulle gras" (a dressing to heal burns) and the homonoid forceps (a medical tool).[citation needed]

The Lumière Brothers were not the only ones to claim the title of the first cinematographers. The scientific chronophotography devices developed by Eadweard Muybridge, Étienne-Jules Marey and Ottomar Anschütz in the 1880s were able to produce moving photographs, as was Thomas Edison's Kinetoscope, premiered in 1891. Since 1892, the projected drawings of Émile Reynaud's Théâtre Optique were attracting Paris crowds to the Museé Grevin. Louis Le Prince had been shooting moving picture sequences on paper film as soon as 1888, but had never performed a public demonstration. Polish inventor, Kazimierz Prószyński had built his camera and projecting device, called Pleograph, in 1894. Max and Emil Skladanowsky, inventors of the Bioskope, had offered projected moving images to a paying public one month earlier (November 1, 1895, in Berlin). Nevertheless, film historians consider the Grand Café screening to be the true birth of the cinema as a commercial medium, because the Skladanowsky brothers' screening used an extremely impractical dual system motion picture projector that was immediately supplanted by the Lumiere cinematographe.

Although the Lumière brothers were not the first inventors to develop techniques to create motion pictures, they are often credited as one of the first inventors of Cinema as a mass medium, and are among the first who understood how to use it. By comparison, it is argued that Thomas Edison may have meant his invention as entertainment for rich people, not as a movie to be seen in public.[7] 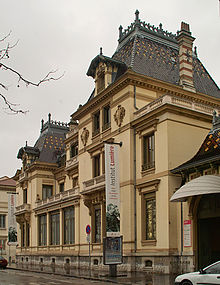 Their house in Lyon, France, is now the Institut Lumière museum.