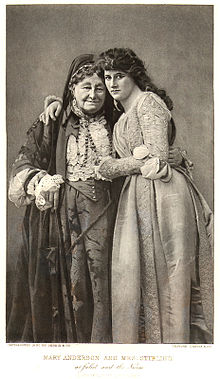 Stirling was born in London, the daughter of a Captain Kehl. After some experience at outlying theatres, she appeared in London in 1836. Having been successful as Celia in As You Like It and Sophia in The Road to Ruin, Macready gave her an opportunity to play Cordelia to his Lear, and Madeline Weir to his James V in the Rev. James White's King of the Commons.

In 1852 she created Peg Woffington in Reade and Taylor's Masks and Faces. Meanwhile she had married Edward Stirling (d. 1894), an actor, manager and dramatic author.

In later years Mrs Stirling gained a new popularity as the nurse in Irving's presentation (1882) of Romeo and Juliet, and again (1884) with Mary Anderson; and she was the Martha in Irving's production of Faust (1885). She died on 28 December 1895, having in the previous year married Sir Charles Hutton Gregory (1817-1898).

She is buried in Brompton Cemetery, London. A biography of her was published in 1925 by her grandson Percy Allen.