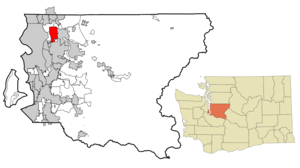 mapsize = 250x200px
map_caption = Location of Kirkland within , and King County within .

Kirkland is an affluent city in King County, , . It is a of Seattle located on the Eastside (of ). As of , , the city had an estimated population of 45,740, making Kirkland the eighth largest city in King County and the eighteenth largest city in the State. [cite web|url=http://www.ci.kirkland.wa.us/__shared/assets/Community_Profile_20043320.pdf|author=City of Kirkland|title=2004 Community Profile|date=July, 2005|accessdate=2007-06-28]

Notable features of the city include its downtown, located on the lakefront (Kirkland is the only city on the Eastside with a waterfront downtown), with many restaurants and art galleries and a 400 seat performing arts center; numerous public parks, including a number of beaches; and a large collection of public art, primarily bronze sculptures.

Kirkland is the former home of the ; the NFL team's headquarters and training facility were located in Kirkland for its first 32 seasons. The Seahawks moved to the new 19-acre Virgina Mason Athletic Center in Renton on August 18, 2008. Warehouse chain previously had its headquarters in Kirkland (now in Issaquah), hence the "" store brand. Several prominent companies like (developer of the "Halo", "Marathon", "Myth" and "Oni" video game series) have headquarters in Kirkland; see . It is also home to a development office, and serves as a home for many and employees.

Kirkland is known for its and its market, which are both regularly among the very highest in the state. Based on per capita income, one of the more reliable measures of affluence, Kirkland ranks 13th of 522 areas in the state of Washington to be ranked.

The land around Lake Washington to the east of Seattle, which would later be known as Kirkland, was first settled by Native Americans. English settlers did not arrive until the late 1860s when the McGregor and Popham families built their homesteads in what is now the Houghton neighborhood. Four miles to the north people also settled near what they would later call Juanita Bay, a favored campsite of the Natives because a type of wild potato, "wapatos", thrived in the region. The Curtis' arrived in the area sometime in the 1870s and, later, the French family in 1872. The Forbes family homesteaded what is now Juanita Beach Park in 1876

In 1886, Peter Kirk, a British-born enterprising businessman seeking to expand the family’s Moss Bay steel production company, moved to Washington State after hearing that deposits had been discovered in the Cascade mountain range. Other necessary components such as , needed in steel , were readily available in the area. Further yet, a small number of s (a required fuel source for s) had recently been established nearby in Newcastle and train lines were already under construction. Plans were also underway to build the .

Kirk realized that if a town were built near the water it would be a virtual freshwater port to the sea, as well as help support any prospective mill. At the time, however, Kirk was not a U.S. citizen and could not purchase any land. Fortunately, Leigh S.J. Hunt, then owner of the "", offered to partner with Kirk and buy the necessary real estate.

Under their new venture, the Kirkland Land and Development Company, Kirk and Hunt purchased thousands of acres of land in what is now Kirkland’s downtown in July 1888. Kirk and his associates started the construction of a new steel mill soon after, named Moss Bay Iron and Steel Works. Thus founding the city of Kirkland in 1888, officially one of the earliest on the Eastside at the time, Kirk’s vision of a "Pittsburgh of the West" was beginning to take form.

However, the , which had recently been purchased by Tacoma-based Northern Pacific, had now refused to construct a rail line to the lake. This would, after all, have a negative impact on Tacoma, which was furiously competing with Seattle as the dominant Puget Sound seaport. The ensuing financial issues and numerous obstacles were also taking a toll on Kirk, who was running out of investors. Hunt was also in debt from the purchase of land.

Nevertheless, the plans continued and the steel mill was eventually completed in late 1892 on Rose Hill (a full two miles from the Lake’s shore). Unfortunately, before it would ever produce any steel, financial issues arose and due to the the mill subsequently closed without ever producing any steel. In spite of everything, Kirk was determined not to give up on his namesake town, and Kirkland was finally incorporated in 1905 with a population of approximately 532.

In 1900 the Curtis family, who had been living on the Eastside since the 1870s, had made a living operating a ferry-construction business on Lake Washington. Along with Captain John Anderson, the Curtis' were among the first to run ferries in the area. "Leschi", first operated on , , was the original wooden ferry to transport automobiles and people between the Eastside and Madison Park until her retirement 1950. The ferry operations ran nearly continuously for 18 hours each day. However, the construction of the first Lake Washington floating bridge in 1940 made ferry service unprofitable and eventually led to its cancellation. [cite web|url=http://www.historylink.org/essays/output.cfm?file_id=2638|title=The ferry Leschi makes its last run, ending ferry service on Lake Washington on August 31, 1950|author=Alan J. Stein|date=August 30, 2000|publisher=HistoryLink.org] Subsequent years saw wool-milling and warship-building become the major industries.

The first woolen mill in the state of Washington was built in Kirkland in 1892. The mill was the primary supplier of wool products for the prospectors and for the U.S. Military during . By 1917, after the completion of the Lake Washington Ship Canal, the construction of ocean-going vessels had become a major business. By 1940, the thriving had constructed more than 25 warships during for the U.S. Navy, on what is now Carillon Point.

Since the incorporation of Kirkland in 1905, the city has grown to approximately 12 times its original geographic boundaries, nearly doubling in size during the 1940s and 1960s.

Kirkland consolidated with the neighboring town of Houghton on , to form one city of 13,500. It annexed the neighborhood of Totem Lake in 1974, and the neighborhoods of South Juanita, North Rose Hill, and South Rose Hill in 1988, which were the largest annexations undertaken in Washington in nearly two decades. This added a further 16,119 people to Kirkland's population and was responsible for 76 percent of Kirkland's population increase between 1980 and 1990.

Kirkland has not annexed any additional land since 1988, although possible future annexations include the unincorporated communities of Finn Hill, North Juanita, and Kingsgate (collectively known as the Proposed Annexation Areas, or PAAs), which would potentially add nearly seven square miles of new land and an additional population of 33,000. If annexation were approved, Kirkland would become the State's 7th largest city. [cite web|url=http://www.maps-n-stats.com/us_wa_population.html|title=Washington Cities by Population|publisher=maps-n-stats.com (US Census data)]

In March 2006, Washington's legislature approved Senate Bill 6686, which would channel a portion of the State's sales tax to any city which annexes a region with more than 10,000 citizens. This incentive from the State is the impetus for Kirkland's current study of annexation.Fact|date=December 2007

In March 2007, the City of Kirkland released a financial report on annexation. [cite web|url=http://www.ci.kirkland.wa.us/__shared/assets/Consolidated_Summary_of_Phase_1_Fiscal_Analysis5322.pdf|title=Consolidated_Summary_of_Phase_1_Fiscal_Analysis|author=City of Kirkland Finance Dept.|date=February 20, 2007|accessdate=2007-06-28]

In November 2007 the City released the report on capital expenditures for the potential annexation. The report stated, "... it may be necessary to rethink our assumptions or the annexation itself. Staff believes that we have reached a point where it is necessary to reassess the underlying assumptions in our approach to annexation in order to achieve a financial balance using the tools available to the Council." [cite web|url=http://www.ci.kirkland.wa.us/__shared/assets/Special_Study_Session_1115077109.pdf|publisher=City of Kirkland|author=Marilynne Beard, Assistant City manager|date=November 9, 2007|title=Potential Annexation Update|page=5] Three potential options were made available to the City Council:
# Revise selected assumptions and continue with the current strategy;
# Pursue a "revenue-based approach";
# Do not proceed to phase three of annexation.

The City Council will make a go/no-go decision to proceed to "Phase 3" of the annexation process in early 2008. If they choose to proceed, then the issue will be put to a vote in the Potential Annexation Area.

On April 15, 2008, an informal study session by the City Council resulted in a 4-3 vote against moving forward with PAA annexation, effectively ending plans to put the issue to vote in a 2009 ballot. Reasons for the decision included scenario projections estimating a $4.5 million deficit in 2010.

Today Kirkland is socially and economically integrated into the greater Seattle area. Like most of its Eastside neighbors, it is relatively affluent but dependent in large part on nearby technology firms such as Redmond-based . Kirkland has an active antiwar movement, including Evergreen Peace and Justice Community, and members of chapter 92, Washington Truth in Recruiting, Eastside Fellowship of Reconciliation and other groups.

The Kirkland Baseball Commission provides recreational baseball for players ages 13-18. It is affiliated with [http://www.pony.org] the national Pony Baseball organization.

"The Kirkland Courier", founded in 1978, is the city's primary newspaper, with a circulation of 23,000 monthly copies. In 1991, the acquired "The Kirkland Courier", which is a directly-mailed product within Kirkland's incorporated communities. On April 30th, 2007 the "Courier" was purchased by , who now publish the weekly "Kirkland Courier Reporter", delivered to every driveway rather than by mail. Kirkland is also the current home of Bungie Studios, a popular software facility.

During the summer, local residents of neighboring cities flock to Kirkland to visit Kirkland's many waterfront parks on Lake Washington. Kirkland has many neighborhood parks as well, and abuts the equestrian . The waterfront parks are linked together by a paved trail which is open till dusk.

Kirkland is a small, quiet town, with many retired people and apartment complexes. There are quite a few old, quaint houses, though many are being torn down. Currently the major areas undergoing are Houghton, Juanita, Norkirk, Rose Hill, West of Market, and the downtown area.

Kirkland has a variety of bars, clubs and dance clubs, most of which are located in downtown Kirkland's main strip, Lake Street. Crime associated with the bars and clubs, including violence, noise and drunk driving, has drawn criticism. [cite news|title=Kirkland nightlife too lively for some|url=http://community.seattletimes.nwsource.com/archive/?date=20060923&slug=kirklandnight23e|date=September 23, 2006|publisher=Seattle Times|author=Lisa Chiu|accessdate=2008-05-01]

Kirkland has a thriving district downtown. The hosts a number of events.

The Kirkland Teen Union Building in downtown Peter Kirk Park is supported by the city and a number of nonprofit organizations. It has two music stages, a recording studio, darkroom and year-round activities and programs for youth. [cite web|url=http://www.ktub.org/about-us/|title=About Kirkland Teen Union Building|publisher=Kirkland Friends of Youth|accessdate=2007-11-24]

Kirkland is accessible via Interstate 405, which connects it with other Eastside cities, including Bellevue, Renton, and Bothell. Seattle, which is west of Kirkland, as well as Redmond to the east, are both accessible through State Highway 520.

Kirkland is home to and Northwest University, formerly Northwest College of the .

Kirkland has a non-partisan council-manager form of government, with seven council members elected at large for staggered four-year terms. The city council selects a mayor from among its members, who serves as council chair but has no veto power. , the mayor is Jim Lauinger and the city manager is David Ramsay.

There were 20,736 households out of which 23.3% had children under the age of 18 living with them, 42.0% were married couples living together, 8.1% had a female householder with no husband present, and 46.8% were non-families. 35.6% of all households were made up of individuals and 6.7% had someone living alone who was 65 years of age or older. The average household size was 2.13 and the average family size was 2.80.

* [http://www.kirkland100.com/history_aboutkirkland.htm "Kirkland: The Little City That Could"] Retrieved December 22, 2005.