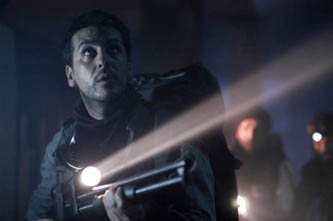 The Dark Hour is a Spanish , produced in , written and directed by Elio Quiroga, and produced by Eqlipse Producciones Cinematográficas with Margaret Nicoll, Jérôme Debève and Juan A. Ruiz as associate producers.

The film follows a group of eight people who live isolated in a crumbling, unknown installation over four days. They are survivors of a cataclysmic war against an unnamed "Enemy". Pablo lives with Magda, leader of the group; Lucas lives with Mateo; Maria lives with Ana as her surrogate mother, Judas lives away from the others and Pedro is an ex-soldier who used to live with Magda. Jesus, the only young boy in the group, films the other survivors on a digicam provided Judas. Jesus and Ana, his teenage love interest, have lessons with the other survivors and visit Judas in the basement to the complex whenever possible as he shows them films and treats them more like adults. On the way to him they pass corridors that decrepit, badly lit and out of bounds, although Jesus leaves some food for the "Solitary Child" that lives in one of these areas.

Throughout the film dilapidated TV sets show old black and white cartoons and 1950's science films with a propaganda voice over talking about destroying an unnamed enemy using nuclear weapons. Jesus can often be seen watching these with Ana. Another states that the enemy has developed a virus that destroys the hosts skin, making the victim constantly bleed but never die, becoming a carrier to infect others. To counter this Jesus dreams about going to the beach, standing in the sun and looking at the sea and saying "Its blue".

The survivors cannot leave the complex and they live in a constant state of vigilance from the threat of "Strangers" and the "Invisibles", the latter only seen as a freezing green mist that seeps around the corridors at night. The survivors only defence against this is to cut off the power and heat, causing the complex to freeze; the Dark (or Cold)Hour of the title. Strangers are those that have been infected by the virus mentioned in the propaganda films. With the food supplies are running out and urgently needing medicine and ammunition they must venture to a supply depot outside of the safe zone through tunnels and abandoned underground complexes.

Pable, Pedro and Lucus are chosen to get supplies, though Pablo freaks out when the shrouded figure of a Stranger starts to follow him. Pedro uses the confusion to lead them into a contaminated area and pushes Pablo into a room full of Strangers, leaving him to become infected. Pedro and Lucus return to their complex to tell the others. Pablo's death devastates Magda and makes the other survivors ponder their dilemma and wonder if there is anyone else alive outside of the complex and if the children have any future. Mateo wonders if it would be better to kill the children then commit suicide rather than face the prospect of little or no future. Judas expands on the nature of the war, how it was one side of the Earth against the other, with the Jesus and Ana.

The complex is visited by the Invisibles and Ana, unaware of the time leaves her room. She sees the green lights and frantically tries to get into another room. Mateo hears her and lets her into him room, where they kiss briefly.

Next day the Solitary Child comes into the complex. His home has been taken over by Strangers. As the children get him cleaned up the survivors organize a party to destroy the Strangers. Maria learns of Mateo's kiss with Ana and slaps him for taking advantage. During the attack Mateo is infected and killed by Maria, as to is Lucas who is killed by Pedro. Back at the complex a Stranger has got past the others and is chasing the children when Jesus is touched by it. They hide in a fridge until the others arrive to rescue them. Pedro wants to kill Jesus as he has been touched but is stopped by the others, especially Magda. Unlike the others Jesus doesn't become infected or start to bleed. Pedro starts listening to the walls and painting figures on them with a spray can. When Magda finds him Pedro is paranoid and talks about the voices behind the walls. Magda tackles him and out of camera shot a gun is heard to go off. Maria, Judas and the children come out of their rooms to see an armed Pedro, followed by a shot Magda in the corridor. While they talk Pedro starts to look off into the distance, behind the survivors the Invisibles are coming.

Pedro takes his gun and walks into the green lights while the other start to run in the other direction, supporting Magda. They run through the corridors firing at the lights. Coming to a garage Judas opens the doors as the invisibles follow them, and you get the first clear sight of the invisibles. As they leave the garage the group are outside for the first time and it appears to be night. They drop their weapons and take a seat in a town square while being surrounded by Strangers. Jesus looks onto his camera and says that it will soon be over and they will join the others and become strangers, but at least it won't hurt.

Spanish company were in charge of the in the film with Jérôme Debève and Juan A. Ruiz acting as supervisors. Over the last few years La Huella has specialized in spectacular computer generated effects, working on the movie and very successful television spots for , Digital Plus, Metro de Madrid and , amongst others.