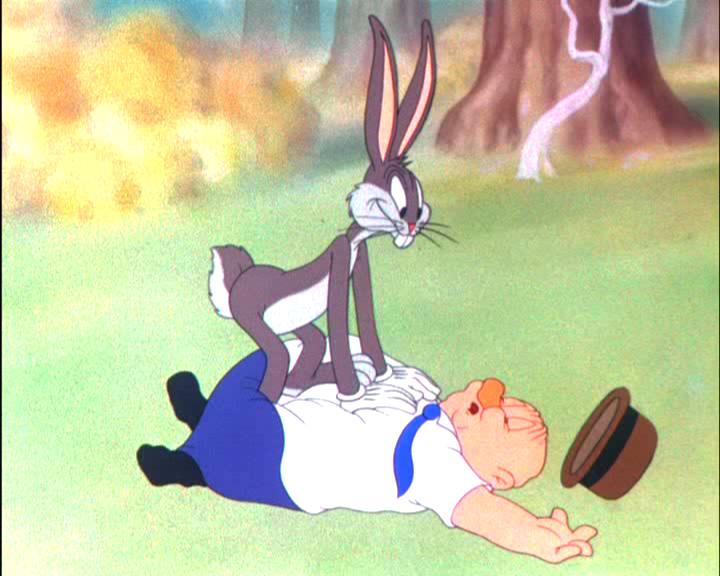 "Wabbit Twouble" (" Trouble") is a starring , produced by Leon Schlesinger Productions released on , by . The title is the first of several cartoon titles that refer to 's speech impediment.

In the cartoon, Elmer expects to find rest and relaxation at Jellostone National Park, but he mistakenly sets camp in the neighborhood of Bugs' rabbit hole, and Bugs (and a neighboring ) don't have much leisure in mind. It was the first Bugs Bunny cartoon directed by Robert Clampett, with a story by and musical direction by . is the only credited , although at least three more, including and , animated on the short as well. provided the voices for Bugs and the , and provided the voice for Elmer.

Elmer, riding in his old jalopy (whose eccentric rear axle and wheel do the Conga "kick" and beat), makes his way to Jellostone National Park (a clear reference to ), where the sign by the entrance promises "Rest and Relaxation" and "a Restful Retreat" (or, in Elmer's usual diction, "West and Wewaxation" and "a Westful Wetweat"). Elmer pitches a tent (near Bug's rabbit hole), and sets up camp by putting a fire stove, a mirror and a table to wash his face, and a hammock. However, he gets annoyed when Bugs unpitches and takes his tent, but gets it back, tied up in knots. Bugs welcomes Elmer to Jellostone (confiding to us "Oh, brother!") Then he pushes Elmer's hat over his eyes. When Elmer reaches into the hole to grab Bugs, Bugs ties up his fingers. He prevents Bugs from getting out of his hole by hammering a board, saying that he can't get out of that. However, Bugs does get out of that, and mimics Elmer's weight and what he previously said, labeling it "phooey". Elmer lies down in his hammock and soon falls fast asleep, muttering to himself.

Bugs then appears from the rabbit hole by Elmer's campsite. He takes a pair of glasses, paints them black, puts them on Elmer's face and sets Elmer's alarm clock to go off. Elmer now thinks it's night (since everything seems so dark), so he gets undressed and goes to bed. Bugs then takes the glasses off and crows like a rooster, making Elmer think that it's the next morning.

When Elmer goes to wash his face, Bugs keeps the towel at a distance with a branch, causing Elmer to blindly follow the towel. (As Bugs tells the audience, "I do this kind of stuff to him all through the picture.") Elmer then almost falls off a cliff. He then, looks at the miraculous view of the . But just when he sees that Bugs is the one pulling these gags, Bugs runs off, with Elmer giving chase after retrieving a gun from his tent.

However, when he tries running after Bugs with his rifle, he winds up running into a black bear instead. The bear starts growling, and so Elmer turns to a wildlife handbook for advice, which states (letters Elmer substitutes for "W" are italicized):

The bear soon gives up (after sniffing Elmer's "B.O." - his feet), but Bugs has more fun with Elmer when he climbs on Elmer and starts growling exactly like the bear (“Funny situation, ain’t it?”). Just as Bugs starts biting Elmer's foot, Elmer sees what's going on and grabs his rifle. Bugs runs away when the bear returns and Elmer ends up hitting the bear instead. A chase then ensues with Elmer and the bear running through the trees to the chase sequence of . Finally, the bear freaks Elmer out when he rides on top of him.

Eventually, Elmer gives up and quickly packs everything back into his car (including, at first, the tree that was next to his tent). On his way out, he stops back at the sign and reads it again. This makes him think that it's baloney, and to teach the park not to give false advertisement he starts chopping the sign to bits. The park ranger then appears, a stern look on his face. Elmer is then shown in prison for destruction of government property, where he's thankful that he's finally "wid of that gwizzwy bear and scwewy wabbit! West and wewaxation at wast!" But he turns to find out that somehow he's sharing his cell with both Bugs "and" the black bear. (Each of them chews a carrot and asks, "Eh, pardon me, but ... um, how long are ya in for, Doc?")

* For this cartoon, Elmer was redesigned as a fat man (based on voice actor 's own physique) in an attempt to make him funnier. The "fat Elmer" would only make four more appearances -"", "", "" and "" - before returning to the slimmer form by which he is better known, for "". This cartoon was the only time, though, that the Fat Elmer also had a red nose.

* The title card credits are written in "Elmer Fudd-ese"; that is, written the way Elmer would say them ("Superwision Wobert Cwampett" and so on).

* It has been suggested on various forums dedicated to classical that this cartoon originally began production under and was completed by Clampett when Avery left the Warners studio in 1941. The evidence given to support this contention include the reddish nose sported by Elmer Fudd in this cartoon (Avery had given Elmer such a nose in ""), Bugs' design, the unique credit sequence (Avery had previously done such tinkering with the credits of ""), and the credits for Dave Monahan and Sid Sutherland.

* The voice used by Mel Blanc for the bear (who only has one line, at the end of the film, "Yeh, how long ya in for, Doc?") is a softer version of the voice characterization he would later use for and eventually .

* This is the first Bugs Bunny cartoon directed by .