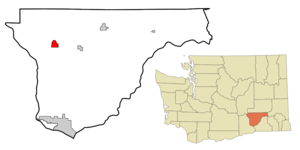 The town of Basin City was laid out in the 1950's on land owned by dry-land farmer Loen Bailey. The town was established to support the local agricultural community which was being opened to irrigation through the . The new settlers to the area consisted primarily of young farmers from Idaho and Southwestern Oregon and World War II Veterans, who received preferential status on the purchase of federal lands that were sold as part of the Project. Early crops included sugar beets, alfalfa, corn, asparagus, wheat and barley. Later, potatoes, beans, carrots, and onions also became important, while sugar beet production stopped due to closure of a local sugar beet plant. A large number of orchards were planted and the area is now a major supplier of the famous Washington Apples. Cherries and other fruits are also produced locally.

Basin City is located at coor dms|46|35|29|N|119|8|58|W|city (46.591416, -119.149325)GR|1. As the name implies, it lies in a basin. The land west of the town slopes gradually downward for about 2 miles then rises abruptly by about 300 feet (100 m) at Basin Hill. Basin Hill extends about 5-6 miles southwest of town to the Columbia River, where it forms the southern extent of the "White Bluffs" for which the town of was named. It also extends 5-6 miles to the north, where it is called Sage Hill and then rises a bit higher at Radar Hill, named for an old World War II Radar base installed at the peak. A little further to the northwest lie the Saddle Mountains. The tallest peak visible from Basin City is Rattlesnake Mountain about 25 miles to the southwest on the opposite side of the Columbia River. However, from the top of nearby Basin Hill it is possible to see , which lies approximately 125 miles to the West in the Cascade Mountains. A small lake, called Bailie's Lake, formed by irrigation runoff lies to the northwest of town and provides opportunities for fishing and hunting.

According to the , the CDP has a total area of 3.2 s (8.3 ), all of it land. Although the CDP itself is quite small, it serves as the heart of a much larger agricultural community extending for miles in all directions.

There were 219 households out of which 68.0% had children under the age of 18 living with them, 71.7% were married couples living together, 13.2% had a female householder with no husband present, and 6.4% were non-families. 4.1% of all households were made up of individuals and 1.8% had someone living alone who was 65 years of age or older. The average household size was 4.42 and the average family size was 4.41.