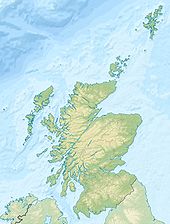 Dechmont Woods near Livingston in Scotland

The Robert Taylor Incident, sometimes also referred to as the Livingston Incident or the Dechmont Woods Encounter is the name given an event which occurred on Dechmont Law ("law" means "hill" in the Scots language) near Livingston, West Lothian, Scotland in 1979, in which local forester Robert "Bob" Taylor reported encountering an extraterrestrial spacecraft.[1][2] It is notable as being the first reported UFO case to have been officially investigated by the Scottish Lothian and Borders Police. As of 2007, it was the only recorded incident in which a UFO sighting has been the subject of a criminal investigation in the United Kingdom.[1]

The site where Taylor's encounter is said to have occurred has since become a tourist destination popular with UFO enthusiasts.[1]

On November 9, 1979, approximately between 10:00 a.m. and 10:30 a.m. Taylor, who was at the time working for the Livingston Development Corporation, parked his pickup truck at the side of a road just off the M8 motorway with the intention of examining the progress of some saplings in the forest. Being unable to access the forest by truck, Taylor and his dog made their way into the forest on foot along one of the forest paths that lead up the side of Dechmont Law.

Upon entering a clearing approximately 500 metres away from his truck, Taylor saw what he described as a large, circular object, spheroid in shape and approximately twenty feet (six metres) in diameter hovering above the forest floor. The object had a narrow rim running along its circumference with stems topped with propellers and the surface of the object seemed to be constructed from a dark metallic material which appeared transparent in places. Taylor later described the surface of the object having rough texture similar to that of sandpaper and suggested that by having transparent areas on its surface, the object was attempting to camouflage itself with its surroundings.[3][4]

Taylor began to approach the object and upon doing so two smaller spheres three feet in diameter, which looked to be made from the same material, appeared to drop from underneath the larger sphere and began to roll towards him. Taylor described the smaller spheres as having appendages, making them similar to sea mines in appearance. As the small objects moved towards him, Taylor described them as making a "plopping" noise as the appendages made contact with the ground. The small spheres maneuvered around Taylor and by using their appendages, attached themselves to each side of his trousers, just underneath the pockets. Taylor said at this point, he heard a hissing noise coming from the small objects and he began to choke due to a strong acrid smell which he believes was being secreted by them. He described this smell as "burning automobile brake linings"[3] which was also described as an "acrid smell" which caused him to cough[4]. By now, Taylor was aware he was being dragged by the smaller spheres along the ground towards the larger object. He eventually fell forwards onto his face and lost consciousness.

Taylor later regained consciousness and upon doing so discovered the object had disappeared. Taylor then discovered he had trouble attempting to speak and could not get to his feet. He then crawled 100 metres along the ground and managed to stagger the rest of the distance back to where he had parked his truck. On reaching the truck he attempted to call for help on the truck's two way radio, but struggled due to his loss of voice. Taylor then attempted to get back home in the truck, but accidentally ditched it in soft earth while trying to drive in his condition. Due to his vehicle being stuck, Taylor walked the rest of the way back home[3][citation needed]. Other sources state the truck did not start and Taylor had to walk home from its parked location.[5][citation needed]

Taylor was always cited as being a man of good character, honest and reliable[6] He never asked for payment on reciting his version of events and up until his death at the age of 89 in 2007, still defended what he had seen on Dechmont Law. Today, a plaque (which was later stolen) and a small statuette are located in the clearing where Taylor stated he saw the object.[1][7]

Upon reaching home at 11:30 a.m., Mary Taylor, Taylor's wife, expressed concern at his state. She assumed he had been attacked and called the police. Taylor intervened and requested she contact Malcolm Drummond, a supervisor at Livingston Development Corporation. While awaiting Drummond's arrival, Taylor complained of a headache and kept saying that he had been "gassed". Drummond and Taylor both attended the scene of the incident a short while later the same day and discovered strange indentations in the forest floor which Taylor stated had not been there earlier that morning. One set were described as looking like rungs in ladder, the other indentations which numbered forty in total were suspected to be the tracks left by the smaller objects. No scorch marks were seen on the forest floor. Staff of the Livingston Development Corporation later took photographs of the scene.[5]

Taylor was seen by a doctor who found only grazing to his chin and thighs. Due to his injuries the police recorded the matter as a common assault. Taylor's wife noticed tears in his trousers where Taylor claimed the small objects had attached themselves to him. The police later seized the trousers to be forensically examined. The forensic examination determined the tears in the trousers suggested the implements that had pierced the material, attempted to lift Taylor in an upwards fashion.

The trousers were later returned by the police and to this day are held by UFO researcher Malcolm Robinson.

It has been suggested by investigative science writer Stuart Campbell that Taylor actually witnessed a mirage of Venus, which induced an epileptic fit causing him to hallucinate the whole encounter. According to Robert Taylor, he had never experienced epilepsy before or after the event.[5]

The indentations have been described as being that of heavy construction equipment. CID Detective Sergeant Ian Wark investigating the case checked all the forestry equipment used in the area; none of it had tracks that matched and there were no construction vehicles in the vicinity.[8]

Earlier during his investigation of the Livingston incident Steuart Campbell suspected that Robert Taylor had observed an exotic form of natural phenomena termed “black ball lightning”. This is an apparent variation of conventional ball lightning that somehow acquires a dark hue, patchy discolouration and/or an opaque aspect. However, while seemingly consistent with the sightings’ short duration and providing a potential explanation for the “sea mines”, their behaviour and possibly some of the physiological effects, the theory has many notable drawbacks. To begin with, the physical traces had no associated scorching or burning of the type one would expect of such an effect. Other aspects of the “sea mine” forms suggest they were physical objects capable of grasping Taylor, gripping and tearing his trousers and seemingly dragging him a short distance towards the object. It is equally of note that the witness had close contact with these forms without experiencing sensations of heat, burning or an electrical discharge of any kind, his dog also seemingly being unharmed. Finally (perhaps the most significant factor of all) the prevalent metrological conditions were not notably conducive with the formation of ball lightning.

A theory by author David Slater, proposes that Taylor’s experience may have been a belladonna induced hallucination that triggered memories of a recently aired Doctor Who episode in which a spaceship of similar appearance featured. It suggests the ground markings likely have a prosaic explanation such as post holes left over from a den that once occupied the site. The illustrated on-line article, Spaceships, Spheres and the Devil’s Herb, is admittedly speculative. Scottish UFO researcher Malcolm Robinson who also researched this case, is still of the opinion that what Robert Taylor saw, he saw. Mr Taylor maintained to Malcolm many times that what he saw was a spaceship, something not of this world something to which Malcolm Robinson concurs with. [9]