Congregation of Christian Brothers
For the order originating in France, see Lasallian Brothers.

Logo of the Christian Brothers, adopted in January 2006.

The Congregation of Christian Brothers (officially, in Latin: Congregatio Fratrum Christianorum)[1] is a worldwide religious community within the Catholic Church, founded by Blessed Edmund Rice.[2] The Christian Brothers, as they are commonly known, chiefly work for the evangelisation and education of youth, but are involved in many ministries, especially with the poor. Their first school was opened in Waterford, Ireland, in 1802.[2] Br Philip Pinto is the current Congregation Leader of the Christian Brothers,[3] and head of its Congregational Leadership Team that is based in Rome. At the time of its foundation, though much relieved from the harshest of the Penal Laws by the Irish Parliament's Relief Acts, some discrimination against Catholics remained throughout the newly created United Kingdom of Great Britain and Ireland pending full Catholic Emancipation in 1829.

At the turn of the eighteenth century, Waterford merchant Edmund Rice considered travelling to Rome to join a religious order, possibly the Augustinians. Instead, with the support of Dr. Thomas Hussey, Catholic Bishop of the Diocese of Waterford and Lismore, he decided to found a religious community dedicated to teaching disadvantaged youth.

The first school, on Waterford's New Street, was a converted stable and opened in 1802, with a second school opening in Stephen Street soon after to cater for increasing enrolments. Two men from his hometown of Callan, Thomas Grosvenor and Patrick Finn, soon arrived to aid Rice in his makeshift schools, with the intention of living the life of lay brothers. In the same year, Rice used proceeds from the sale of his victualling business to begin building a community house and school on land provided by the diocese. Bishop Hussey opened the new complex, christened “Mount Sion” on June 7, 1803, and pupils were transferred to the new school building the following year.[4] The reputation of the school spread and across the next few years several men sought to become “brothers”.

On 15 August 1808, seven men, including Edmund Rice, took religious promises under Bishop John Power of Waterford. Following the example of Nano Nagle's Presentation Sisters, they were called "Presentation Brothers".[5] This was one of the first congregations of men to be founded in Ireland and one of the few founded in the Church by a layman.

Houses were soon opened in Carrick-on-Suir, Dungarvan, and in 1811, in Cork. In 1812 the Archbishop of Dublin established a community in the nation's capital and by 1907 there were ten communities in Dublin, with in excess of 6,000 pupils. The schools included primary, secondary and technical schools, along with orphanages and a school for the deaf. A community was founded in Limerick in 1816, followed by establishments in several of Ireland's principal towns.

The Holy See formally established the congregation in 1820. This, too, was an unusual event, since the Christian Brothers were the first Irish congregation of men approved by a charter from Rome.

Some brothers in Cork chose to remain under the original Presentation rule and continued to be known as Presentation Brothers, a separate congregation but also recognising Edmund Rice as its Founder.

Traditional crest of the Christian Brothers, incorporating the Latin motto Facere et docere ("To Do and To Teach").

The congregation of Irish Christian Brothers spread to Liverpool and other parts of England. Brother Ambrose Treacy established a strong presence in Melbourne, Australia in 1868, and in 1875 in Brisbane, Australia and in 1876 a school was commenced in Dunedin, New Zealand. In 1875 a school was opened in St. John’s, Newfoundland. In 1878 the Brothers were introduced to the then Crown colony of Gibraltar. In 1886 the Pope requested that they consider setting up in India. A province of the congregation was established there. In 1900 came the invitation to establish houses in Rome, and in 1906 schools were established in New York City.

These new ventures were not always successful. Two brothers had been sent to Gibraltar to establish an order in 1835. However, despite initial successes they left in August 1837 on account of disagreements with the local priests.[6] Similarly, a mission to Sydney, Australia in 1842 failed within a couple of years.[7]

In 1955 Stella Maris College (Montevideo) in Uruguay was established, which became one of the leading schools in the country, but also became known for the accidental fame for the Andes Flight Disaster involving its alumni rugby team.

The Brothers' schools continue to be of many types, including primary, secondary and technical schools, orphanages and for the deaf. A number of these technical schools originally taught poor children trades such as carpentry and building skills for which they could progress to gain apprenticeships and employment. As the National School system and vocational schools developed in the Irish Republic, the Irish Christian Brothers became more concentrated on secondary education. 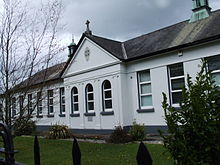 The Irish Christian Brothers are strong supporters of Irish nationalism, the Irish Language revival and Irish sports. In most of their schools in Ireland Gaelic football and hurling were encouraged as opposed to other sports and there were even examples of boys being punished for playing Association Football. Conor Cruise O'Brien called them "the most indefatigable and explicit carriers" of the Catholic nation idea.[8] In the absence of government devised text books that were inexpensive, the Christian brothers composed and published a number of text books which were used by their schools. Many of these were in the Irish language but also dealt with Mathematics and other subjects.

Organisational structure of the Christian Brothers

Restructuring has taken place in the congregation to account for the changing needs, in particular the declining number of brothers in the developed world. The three provinces of North America (Canada, Eastern American, and Western American Province) restructured into the Edmund Rice Christian Brothers North America on 1 July 2005.[9] The provinces that cover Ireland, England and the Congregational Leadership Team in Rome combined into a single European province on May 5, 2007,[10] while the five provinces covering Australia, New Zealand and Papua New Guinea combined into one Oceania province on October 1, 2007,[11] The English Province is a registered charity.[12] The Dublin Headquarters are in the grounds of Marino Institute for Education, Claremont, Griffith Avenue, Dublin 9, Ireland.

A special community within this new European province will be based in Geneva, Switzerland, working to establish an NGO known as Edmund Rice International. The purpose of such an organisation is to gain what is known as a "general consultative status" with the United Nations. "This position allows groups the opportunity to challenge systemic injustice and to engage in advocacy work with policy makers on behalf of people who are made poor." As well as including Christian Brothers from provinces all over the world, members of the Presentation Brothers will also have a presence within this community.[13]

Edmund Rice Development is a faith-based Non-governmental Organisation with charity status in Ireland. Based in Dublin, Edmund Rice Development was established in 2009, to formalise the fundraising efforts of the developing world projects for the Christian Brothers globally and received its charitable status in 2009. Funding raised by the charity is directed mainly to 9 countries in Africa, where The Christian Brothers work on mission in development: Ghana, Kenya, Liberia, Sierra Leone, South Africa, Sudan, Tanzania, Zambia, and Zimbabwe. Additional funds are also raised for similar work in South America (Argentina, Bolivia, Paraguay, Peru and Uruguay) and India.

See also: Abuse by priests in Roman Catholic orders and Sexual abuse scandal in the Congregation of Christian Brothers

In the late 20th and early 21st century the reputation of the congregation suffered from the exposure of a series of scandals involving emotional, physical and sexual abuse of Irish children in the congregation's care, stretching back over a long period of time. Similar abuse emerged also in other countries where the congregation had had a presence, including Canada, the United States and Australia.

In May 2009 a report was issued by an independent government commission on child abuse committed on thousands of children in residential care institutions run by various religious orders for the Irish state.[15] This report found that sexual abuse of boys in institutions run by the Brothers was common. In response, the Irish province of the order issued a pledge to pay 161 million euros toward a fund set up to compensate victims of such abuse in both their institutions and those run by other religious orders, both male and female.

Such abuse was not limited to Ireland. According to the Chicago-Sun Times, in 1998 Brother Robert Brouillette was arrested in Joliet, Illinois, for indecent solicitation of a child.[16] In 2002, a civil lawsuit was filed in Cook County, Illinois, against Brother Brouillette for sexual assault against a 21 year old man.[17]

Australia has also seen such abuse. Horrific details of dozens of offences committed by Brother Robert Best against young boys have been heard in court proceedings. Robert Best, 70, taught at Catholic primary and secondary schools in Ballarat, Box Hill and Geelong (all in Victoria, Australia) between the 1960s and 1980s. He has been convicted by a jury and has pleaded guilty to more than 40 child sex offences against dozens of students, some as young as eight years old [18]. Robert Best was sentenced to fourteen years and nine months jail on August 8 2011. Many of his victims were in court for the sentencing and shouted at him as he was led away [19].