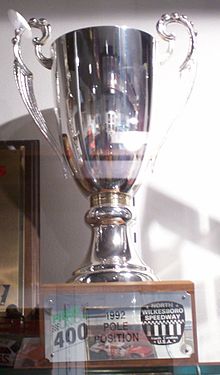 Alan Kulwicki's trophy for winning the pole position in 1992

North Wilkesboro Speedway was a short track that held races in NASCAR's top three series from NASCAR's inception in 1949 until its closure in 1996. NWS was reopened in 2010 and briefly played host to several Stock Car series such as the now defunct ASA Late Model Series, USARacing Pro Cup Series (formerly Hooters Pro Cup) and PASS Super Late Models before closing again in the spring of 2011.

The track is located on U.S. Route 421 about four miles (6 km) east of the town of North Wilkesboro, North Carolina. It measures five-eighths of a mile (0.625 miles (1.006 km)). A unique feature was the uphill backstretch and the downhill frontstretch.

Since the sale to Bahre and Smith, there have been attempts and gestures to buy the track and re-open it by, among others, local native Junior Johnson. The last Sprint Cup race was held there in September 1996, with Jeff Gordon winning.

On November 8, 2007, Bahre sold his share of North Wilkesboro Speedway to Smith as part of Smith's deal to buy Bahre's New Hampshire Motor Speedway. On October 31, 2009, Jayski.com announced that the USAR ProCup Series would host an event at North Wilkesboro Speedway on October 3, 2010. Also in 2010, the track will also host the ASA Late Model Series for the King's Ranson 300 and the PASS Late Models.

On May 9th 2011, a press release from Speedway Associates Inc. announced that the track would be silent once again as they would be ending their 3 year lease prematurely.

On October 16, 1949, North Wilkesboro Speedway held the eighth and final race of the 1949 NASCAR Strictly Stock Division. At the end of the day Robert "Red" Byron walked away as the first NASCAR champion.[3]

The speedway held races for 50 years until September 29, 1996, when Jeff Gordon won the last race to be held at the speedway. The speedway reopened in 2010 with 3 races on the schedule. The most notable investor was Terri Parsons, widow of 1973 NASCAR champion Benny Parsons.

On Monday night May 9th 2011, a press release from Speedway Associates Inc. announced that "the business climate and a lack of working capital has now brought everything at the historic facility to a screeching halt" and as a result the track would be silent once again. [4]

Car owner Jack Roush of Roush Fenway Racing held round one of "Roush's Race For The Ride" at North Wilkesboro Speedway, a competition to find the next Roush Racing development driver.

After Bob Bahre and Bruton Smith purchased the track and moved its two dates to other locations, the track saw little racing. Both owners showed little interest in selling the track until 2005.

STS Motorsports, Inc., a group founded in 2005 by Rob Marsden, has been trying to bring racing back to the track. The group first began a petition and caught the attention of the current owners. Bruton and Bahre eventually agreed to sell the track for $12 million. The track, which has been valued by county tax assessors at $4.83 million, was not sold.[5]

The Save The Speedway group spent fall and winter of 2005 attempting to find a buyer or buyers of the track as well as proof that there was still interest in racing at the facility. Over a dozen touring series had expressed written letters of intent about holding events upon reopening, as well as three driving schools, and several NASCAR teams showed interest in using the facility for testing.

In 2006 the Save The Speedway group worked with a developer from New York in an attempt to get investors, but parted ways when neither party could come to an agreement.[6] As of 2007, the group had not yet found investors to purchase the track.

The group worked with the state of North Carolina and erected a NC Highway Historical Marker in 2008 off Highway 421 to recognize the achievements and contributions of the racing there.

In January 2007 during the NASCAR NEXTEL Cup Media Tour, Bruton Smith announced that he and co-owner Bob Bahre had agreed to let a real estate company attempt to sell the track for the asking price of $12 million.[6] On September 28, 2007 Worth Mitchell, a land developer, announced plans to purchase the speedway.[7] However Worth Mitchell estimates his odds are 50–50 of pulling off the deal and since that time there has been no further information. Speedway Motorsports officials had no comment on the negotiations.[6]

Save The Speedway applied for a highway historical marker that was approved at the May meeting of the NC Highway Historical Marker Advisory Committee. Placement of the marker occurred May 24, 2008.[8] The plaque reads:

The speedway was featured during the USA Road Trip special of Top Gear's 15th Series where presenter Jeremy Clarkson happened to wear down the rear tires of the Mercedes-Benz SLS AMG that he was driving.