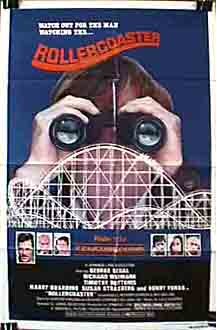 "Rollercoaster" is a summer 1977 disaster-suspense directed by . It was one of four films created in by , along with "Midway", "Earthquake", and the theatrical version of "Battlestar Galactica".

The plot surrounds the blackmail of various companies by an anonymous extortionist () who places radio-controlled explosives on park's signature rides, often the park's (the film opens with a horrific explosion and crash of a sabotaged ride packed with people). Ride safety inspector Harry Calder () works with local police and FBI special agent Hoyt () to track him down. , in her first feature film role, has the supporting role as Tracy Calder, Harry's teenage daughter and a potential victim of the extortionist. , also in his first brief film role, plays a messenger at Magic Mountain who brings the plans for the Revolution roller coaster to Segal & Widmark's characters.

The movie features an appearance by the band Sparks for the roller coaster's opening concert, playing the songs "Fill 'Er Up" and "Big Boy" from their 1975 album "Big Beat". This role was rumored to have been offered to Kiss who turned down the part. Sparks later cited their appearance in the movie in answer to a question about the biggest regret of their career.