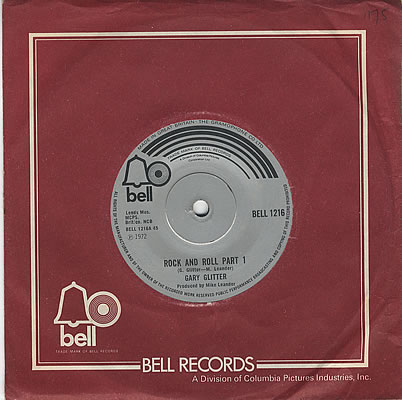 In the US, the portion (Part 2) attracted most of the attention; it hit #7 on the . In the years since, Part 2 of the song has often been played at various sporting events in and the , particularly when the home teams scores (or wins). It was played first in a sport setting at Colorado Rockies hockey games in the late 1970s, [ [http://music.westword.com/Issues/2001-10-04/music/music2.html "Swimming Through History"] , "", ] and the are the first NFL team to play the song during games. [ [http://vault.sportsillustrated.cnn.com/vault/article/magazine/MAG1004585/2/index.htm "The Vibes Of Victory"] , "", ]

The nickname "the Hey Song" refers to fact that the only intelligible word in Part 2 is the exclamation of "hey," punctuating the end of several instrumental phrases and repeated three times at the song's chorus. At sporting events, fans often insert their own "hey," or sometimes other chanted syllables.

In 2005-2006, Glitter was convicted on child sexual abuse charges in . After the conviction was upheld in court, the asked teams to stop playing the song, although Glitter had already been convicted and imprisoned on charges in in 1997. The NFL has allowed a of the song by the to be played. [Cite web |url=http://music.yahoo.com/read/news/35824326 |title=Column: Why did NFL muzzle Gary Glitter? |date=2006-09-15 |accessdate=2008-08-20 |publisher=Yahoo! Music news] Subsequently, some professional and college teams in the US and Canada have discontinued using the song.