How to Get Ahead in Advertising

How to Get Ahead in Advertising

Infobox_Film
name = How to Get Ahead in Advertising 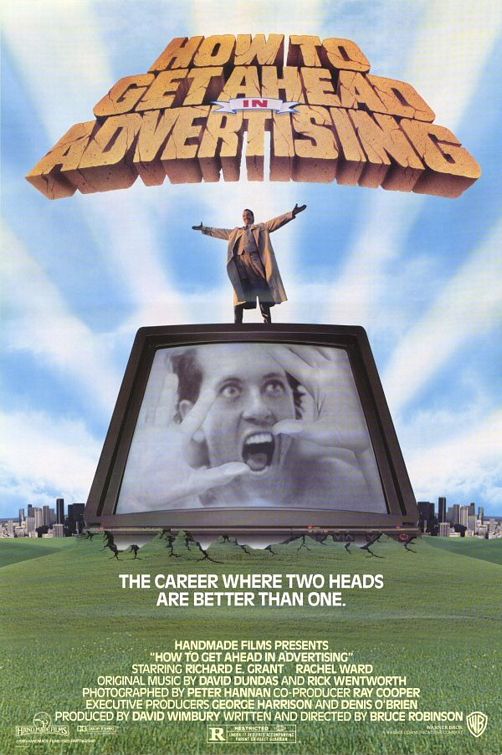 The movie is a about a mentally unstable , Denis Dimbleby Bagley (played by Grant), who suffers a nervous breakdown while making an advert for cream. Ward plays his long-suffering but sympathetic wife. Richard Wilson plays John Bristol, Bagley's boss.

Bagley has a crisis of conscience about the ethics of advertising. He develops a on his right shoulder that he imagines comes to life with a face and voice. The voice of the boil, although uncredited, is that of Bruce Robinson. The boil takes a ruthless and unscrupulous view of the advertising profession in contrast to Bagley's new-found ethical concerns. Eventually, Bagley decides to have the boil removed in hospital but moments before he is taken into the operating room, the boil quickly grows into a replica of Bagley's head (only with a moustache) and covers Bagley's original head, asking doctors to remove it. Bagley, now with the boil head, returns home to celebrate his wedding anniversary, with the original head merely resembling a boil on his left shoulder. The 'boil' eventually withers but doesn't die, yet Bagley resumes his advertising career rejuvenated and cynical, although without his wife, who decides to leave his new cruel persona. The end monologue by Bagley is an argument against his withered boil about roads.

*imdb title|id=0097531|title=How to Get Ahead in Advertising
* [http://www.criterion.com/asp/release.asp?id=120&eid=126&section=essay Criterion Collection essay by Stanley Kauffmann]