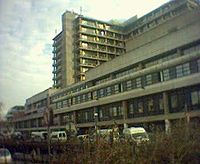 Royal Free Hospital in London, where Myalgic Encephalomyelitis came to prominent attention in 1955

The history of chronic fatigue syndrome (CFS, also known by many other names) is thought to date back to the 19th century and before.

Several descriptions of illness resembling those of chronic fatigue syndrome have been reported for at least two hundred years.[1] In the 19th century neurologist George Miller Beard popularised the concept of neurasthenia with symptoms including fatigue, anxiety, headache, impotence, neuralgia and depression.[2] This concept remained popular well into the 20th century, eventually coming to be seen as a behavioural rather than physical condition, with a diagnosis that excluded postviral syndromes. Neurasthenia has largely been abandoned as a medical diagnosis.[3] The ICD-10 system of the World Health Organization now categorizes neurasthenia under (F48 Other neurotic disorders) which specifically excludes chronic fatigue syndrome.[4]

In 1938, Alexander Gilliam described an illness that resembled poliomyelitis, interviewing patients and reviewing records of one of several clusters which had occurred in Los Angeles, United States in 1934.[5] The Los Angeles County Hospital outbreak included all or most of its nurses and doctors.[6] Gilliam called the outbreak "atypical poliomyelitis" and described the symptoms as: rapid muscle weakness, vasomotor instability, clonic twitches and cramps, ataxia, severe pain (usually aggravated by exercise), neck and back stiffness, menstrual disturbance and dominant sensory involvement.

Novices and convent candidates at a Wisconsin convent were diagnosed with "Encephalitis" in 1936. Two towns in Switzerland had outbreaks of "abortive poliomyelitis" in 1937, and 73 Swiss soldiers were given the same diagnosis in 1939. Outbreaks in Iceland were called "Akureyri disease" or "simulating poliomyelitis" and were later called "Iceland disease." 800 people in Adelaide, Australia became ill during 1949-1951 with a disease "resembling poliomyelitis." Two smaller clusters in the United States during 1950 were diagnosed as "Epidemic Neuromyasthenia" and "resembling Iceland Disease simulating Acute Anterior Poliomyelitis." Additional outbreaks of poliomyelitis-like "mystery diseases" occurred from the 1950s through the 1980s in Denmark, the United States, South Africa, and Australia, among others.[6]

Several outbreaks of a polio-resembling illness occurred in Britain in the 1950s.[7] A 1955 outbreak at the Royal Free Hospital Group was later called Royal Free disease or benign myalgic encephalomyelitis.[8][9] After the Royal Free Hospital outbreak, a disorder with similar symptoms was found among the general population and the epidemic form came to be considered the exception[citation needed]. Pathology findings, both in monkeys[10] and in rare human casualties,[11] led to the conclusion that the disorder was caused by inflammation of the brain and the spinal cord, particularly the afferent nerve roots, perhaps with neuroimmune etiology.[12]

In the 1960s and 1970s, chronic fatigue symptoms were often attributed to chronic brucellosis, but typically people were seen as having psychiatric disorders, in particular depression.[6] Epidemic cases of benign myalgic encephalomyelitis were called mass hysteria by psychiatrists McEvedy and Beard in 1970,[13] provoking criticism in letters to the editor of the British Medical Journal by outbreak researchers, attending physicians, and physicians who fell ill.[14][15][16][17][18][19][20][21][22] The psychiatrists were faulted for not adequately investigating the patients they described,[23] and their conclusions have been refuted.[3][24][25] In 1978 a symposium held at the Royal Society of Medicine (RSM) concluded that epidemic myalgic encephalomyelitis was a distinct disease entity.[26]

The illness gained national attention in the United States when the popular magazine Hippocrates ran a cover story of an epidemic at Lake Tahoe Nevada in the mid-1980s.[27] The designation Chronic Epstein-Barr Virus was in use in the U.S.,[28][29] but the magazine used the term "Raggedy Ann Syndrome" to note the fatigue and loss of muscle power patients felt.[30]

Researchers investigating the Lake Tahoe cluster did not find evidence that EBV was involved, and they proposed the name chronic fatigue syndrome, describing the main symptom of the illness.[31][32] They published the first working case definition for CFS in 1988.[33] Research increased considerably, and more so after the criteria were relaxed in 1994.[34]

In 1990, researchers presented evidence they found DNA sequences very similar to the human HTLV-II retrovirus in some CFS patients, at a conference in Kyoto, Japan.[35][36] Their study was later published in the Proceedings of the National Academy of Sciences.[37] A reporter on Prime Time Live stated the announcement made headlines all over the world. The CDC first ignored their findings,[38] then later conducted a study and published a paper that refuted the hypothesis.[39]

In the United Kingdom, the Chief Medical Officer Kenneth Calman requested a report from the medical Royal Colleges in 1996. This led to the publication of a joint report in which the term "chronic fatigue syndrome" was found to be most representative.[40] This was followed in 2002 by a further report by the new CMO, Liam Donaldson.[41]

The U.S. Centers for Disease Control & Prevention (CDC) recognize CFS as a serious illness and launched a campaign in June 2006 to raise public and medical awareness about it.[42][43]

On October 9, 2009 news articles[44] appeared regarding a study[45] that identified the XMRV retrovirus in a population of people with CFS. Other studies failed to reproduce those findings,[46][47][48] sparking a controversy about XMRV's purported association with CFS.

The World Health Organization's (WHO) International Classification of Diseases (ICD), mandates the international classifications of diseases to allow comparison of health and health fields across countries and throughout the world.[49] It should be noted that not all terms appear in the tabular list (Volume 1), and many more terms are listed in the alphabetic index (Volume 3) of the ICD.[50]

Since its introduction into the eighth edition of the WHO ICD-8 in 1969 (code 323), (Benign) myalgic encephalomyelitis has been classified as a disease of the central nervous system.[51]

The term "benign myalgic encephalomyelitis" appears in the 1975 ICD-9 alphabetic index, and references code 323.9, Encephalitis of unspecified cause.[52] The code 323.9 did not include reference to postviral syndrome. The term “postviral syndrome” was classified to code 780.7, Malaise and fatigue, in Chapter 16, Symptoms, signs and ill-defined conditions.[50]

Since 1979 the U.S. has used a clinical modification of WHO's ICD 9th revision (ICD-9-CM),[50] and ME is under index: "Encephalomyelitis (chronic) (granulomatous) (hemorrhagic necrotizing, acute) (myalgic, benign) (see also Encephalitis) 323.9."[53]

For CFS, a modification to the alphabetic index was made effective on October 1, 1991 to direct users to code 780.7, Malaise and fatigue, the same code used to identify cases of postviral syndrome. In 1998, a new five-digit code included 780.71, Chronic fatigue syndrome, consistent with the WHO version of ICD-9.[50] Chronic fatigue syndrome is classified in tabular list: "Symptoms, Signs and Ill-Defined Conditions," under the sub-heading of "General Symptoms".[54]

CFS is not included as a coded term in the 1992 ICD-10, WHO created a new category G93, Other disorders of brain, in Chapter VI, Diseases of the Nervous System, and created a new code G93.3, post-viral fatigue syndrome (PVFS), a condition which was previously in the symptom chapter of ICD-9. WHO also moved benign myalgic encephalomyelitis to G93.3, subordinate to PVFS. The alphabetic index contains other terms, such as chronic fatigue syndrome, to which WHO assigned the same code.[50][55]