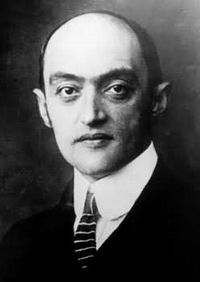 Born in , (then part of , now in the ), Schumpeter was a brilliant student praised by his teachers. He began his career studying law at the under the Austrian capital theorist , taking his in 1906. In 1909, after some study trips, he became a professor of economics and government at the University of Czernowitz. In 1911 he joined the , where he remained until . In 1919-1920, he served as the Austrian Minister of Finance, with some success, and in 1920-1924, as President of the private Biederman Bank. That bank, as great part of that regional economy, collapsed in 1924 leaving Schumpeter bankrupt.

From 1925-1932, he held a chair at the , . With the rise of in central Europe, he moved to where he had lectured in 1927-1928 and 1930. He would teach there from 1932 until his death in 1950. During his Harvard years he was not generally considered a good classroom teacher, but he acquired a school of loyal followers. His prestige among colleagues was likewise not very high because his views seemed outdated and not in synch with the then-fashionable . This period of his life was characterized by hard work but little recognition of his core ideas.

Although Schumpeter encouraged some young mathematical economists and was even the president of the (1940-41), Schumpeter was not a mathematician but rather an economist and tried instead to integrate sociological understanding into his economic theories. From current thought it has been argued that Schumpeter's ideas on s and could not be captured in the mathematics of his day - they need the language of non-linear to be partially formalized.

The history of economic analysis

Schumpeter's vast erudition is apparent in his posthumous "History of Economic Analysis", although some of his judgments seem quite idiosyncratic and sometimes cavalier. For instance, Schumpeter thought that the greatest 18th century economist was Turgot, not , as many consider, and he considered to be the "greatest of all economists", besides whom other economists' theories were "like inadequate attempts to catch some particular aspects of Walrasian truth." [http://cepa.newschool.edu/het/essays/margrev/phases.htm#aftermath] . Schumpeter criticized and for the "Ricardian vice." According to Schumpeter, Ricardo and Keynes reasoned in terms of abstract models, where they would freeze all but a few variables. Then they could argue that one caused the other in a simple monotonic fashion. This led to the belief that one could easily deduce policy conclusions directly from a highly abstract theoretical model.

Schumpeter's relationships with the ideas of other economists were quite complex in his most important contributions toeconomic analysis - the theory of and development. Following neither Walras nor Keynes, Schumpeter starts in "The Theory of Economic Development [Schumpeter, J.A. "The theory of economic development : an inquiry into profits, capital, credit, interest, and the business cycle / translated from the German by Redvers Opie" (1961) New York: OUP] " with a treatise of which, excluding any innovations and innovative activities, leads to a stationary state. The stationary state is, according to Schumpeter, described by . The hero of his story, though, is, in fine Austrian fashion, the .

The entrepreneur disturbs this equilibrium and is the prime cause of economic development, which proceeds in cyclic fashion along several time scales. In fashioning this theory connecting innovations, cycles, and development, Schumpeter kept alive the Russian Nikolai Kondratiev's ideas on 50-year cycles, s.

Schumpeter suggested a model in which the four main cycles, Kondratiev (54 years), Kuznets (18 years), Juglar (9 years) and Kitchin (about 4 years) can be added together to form a composite waveform. (Actually there was considerable professional rivalry between Schumpeter and Kuznets. The wave form suggested here did not include the Kuznets Cycle simply because Schumpeter did not recognize it as a valid cycle. See "" for confirmation.) A Kondratiev wave could consist of three lower degree Kuznets waves. Each Kuznets wave could, itself, be made up of two Juglar waves. Similarly two (or three) Kitchin waves could form a higher degree Juglar wave. If each of these were in phase, more importantly if the downward arc of each was simultaneous so that the nadir of each was coincident it would explain disastrous slumps and consequent depressions. (as far as the segmentation of the Kondratyev Wave, Schumpeter never proposed such a fixed model. He saw these cycles varying in time - although in a tight time frame by coincidence - and for each to serve a specific purpose)

In Schumpeter's theory, Walrasian equilibrium is not adequate to capture the key mechanisms of economic development. Schumpeter also thought that the institution enabling the entrepreneur to purchase the resources needed to realize his or her vision was a well-developed capitalist financial system, including a whole range of institutions for granting credit. One could divide economists among (1) those who emphasized "real" analysis and regarded money as merely a "veil" and (2) those who thought monetary institutions are important and money could be a separate driving force. Both Schumpeter and Keynes were among the latter. Nevertheless, Schumpeter, who was a , rejected Keynesianism.

Schumpeter's most popular book in English is probably "". This book opens with a treatment of . On the surface level, this piece seems to support socialism. Schumpeter's reasoning was that an overt defense of capitalism would prompt the book only to be read by those who already supported capitalism. Therefore, he believed that he must masquerade as a supporter of socialism to entice the young socialist to read his work. In the end, he hoped to awaken self-recognition in the reader to the flaws of socialism. [Muller, Jerry Z. The Mind and the Market. Anchor Books, New York. 2003.] While he is sympathetic to Marx's theory that capitalism will collapse and will be replaced by , Schumpeter concludes that this will not come about in the way Marx predicted. To describe it he borrowed the phrase "," and made it famous by using it to describe a process in which the old ways of doing things are endogenously destroyed and replaced by new ways.

Schumpeter's theory is that the success of capitalism will lead to a form of and a fostering of values hostile to capitalism, especially among intellectuals. The intellectual and social climate needed to allow to thrive will not exist in advanced capitalism; it will be replaced by socialism in some form. There will not be a revolution, but merely a trend in s to elect parties of one stripe or another. He argued that capitalism's collapse from within will come about as democratic majorities vote for the creation of a and place restrictions upon entrepreneurship that will burden and destroy the capitalist structure. Schumpeter emphasizes throughout this book that he is analyzing trends, not engaging in political advocacy. In his vision, the intellectual class will play an important role in capitalism's demise. The term "intellectuals" denotes a class of persons in a position to develop critiques of societal matters for which they are not directly responsible and able to stand up for the interests of strata to which they themselves do not belong. One of the great advantages of capitalism, he argues, is that as compared with pre-capitalist periods, when education was a privilege of the few, more and more people acquire (higher) education. The availabiliy of fulfulling work is however limited and this, coupled with the experience of unemployment, produces discontent. The intellectual class is then able to organise protest and develop critical ideas.

In Schumpeter's view, socialism will ensure that the production of goods and services is directed towards meeting the authentic needs of people and will overcome some innate tendencies of capitalism such as conjecture fluctuation, unemployment and waning acceptance of the system. [It is interesting to note, that Schumpeter's theories of the transition of capitalism into socialism has &ndash; according to some analysts &ndash; been ‘nearly right’ in some cases: "Where Schumpeter was Nearly Right - The Swedish Model and Capitalism, Socialism and Democracy" by Magnus Henrekson, Ulf Jakobsson. Available at http://swopec.hhs.se/iuiwop/papers/iuiwop0533.pdf]

In the same book, Schumpeter expounded a theory of which sought to challenge what he called the 'classical doctrine'. He disputed the idea that democracy was a process by which the electorate identified the common good, and politicians carried this out for them. He argued this was unrealistic, and that people's ignorance and superficiality meant that in fact they were largely manipulated by politicians, who set the agenda. This made a 'rule by the people' concept both unlikely and undesirable. Instead he advocated a minimalist model, much influenced by , whereby democracy is the mechanism for competition between leaders, much like a market structure. Although periodical votes from the general public legitimize governments and keep them accountable, the policy program is very much seen as their own and not that of the people, and the participatory role for individuals is severely limited."

The concept of cannot be fully understood without his contributions, being probably the first scholar to develop its theories.He gave two theories, sometimes called Mark I and Mark II. In the first one, the early one, Schumpeter argued that the innovation and technological change of a nation comes from the entrepreneurs, or wild spirits. He coined the word "Unternehmergeist", German for "entrepreneur-spirit". He believed that these individuals are the ones who make things work in the economy of the country. In Mark II, developed later as professor at , he asserted that the actors that drive innovation and the economy are big companies which have the resources and capital to invest in research and development. Both arguments might be complementary today.

The English literature uses the term entrepreneurship, from the French "enterprise". When studying entrepreneurship and Schumpeter, it is helpful to keep in mind he used the German term (Unternehmergeist), acknowledging this "fiery souls" or "spirits".

For some time after his death, Schumpeter's views were most influential among various heterodox economists, especially European, who were interested in industrial organization, evolutionary theory, and economic development, and who tended to be on the other end of the political spectrum from Schumpeter and were also often influenced by Keynes, Karl Marx, and . was one of Schumpeter's most renowned pupils, who wrote extensively about him in "". Other outstanding students of Schumpeter's include the economist and former chairman of the Federal Reserve, ["I've watched the process [creative destruction] at work through my entire career," p. 48, Greenspan, Alan "The Age of Turbulance : Adventures in a New World" (2007) New York: Penguin Press] . , Nobel Prize in Economics, was his student at Harvard, and he expanded on Schumpeter's theory [http://economistsview.typepad.com/economistsview/2007/05/robert_solow_on.html] .

Today, Schumpeter has a following outside of standard textbook economics, in areas such as in economic policy, management studies, industrial policy, and the study of . Schumpeter was probably the first scholar to develop theories about . For instance, the 's innovation program, and its main development plan, the , are influenced by Schumpeter.

*
*
*
*
*
*Austrian School of economics (Schumpeter was not part of this movement)