Infobox_Film
name = Too Much Johnson 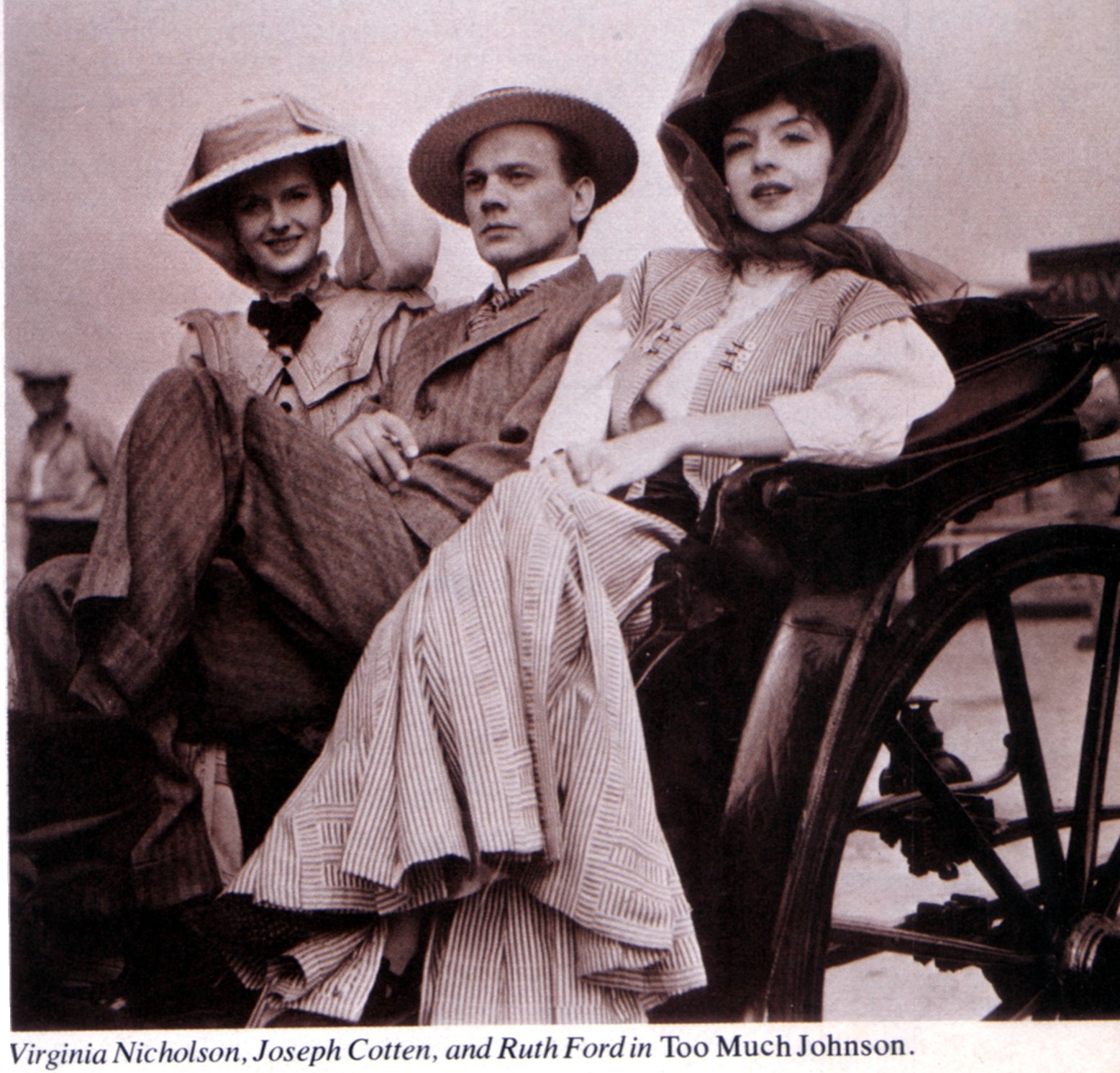 "Too Much Johnson" is a 1938 directed and written by . The film was made three years before Welles helmed "", but it was never publicly screened. No print of the film survives.

"Too Much Johnson" was not intended as a standalone film, but was designed as the cinematic aspect of Welles' stage presentation of ’s 1894 comedy about a New York playboy who flees from violent husband of his mistress and borrows the identity of a plantation owner in who is expecting the arrival of a mail order bride.

Welles planned to mix live action and film for this production. The film was designed to run 40 minutes, with 20 minutes devoted to the play’s prologue and two 10-minute introductions for the second and third act. Welles planned to create a silent film in the tradition of the slapstick comedies, in order to enhance the various chases, duels and comic conflicts of the Gillette play. [ [http://books.google.com/books?id=kUAs4DMh6wgC&pg=PA117&lpg=PA117&dq=%22Too+Much+Johnson%22+%22Orson+Welles%22&source=web&ots=mUe1FHyJG3&sig=zLAMnZKV3zngS3PxmOABfMwSx5M&hl=en&sa=X&oi=book_result&resnum=2&ct=result#PPA118,M1 “Orson Welles” by Charles Higham, Google Books] ]

This was not the first time that Welles directed a film. In 1934, he co-directed (with William Vance) a short parody of cinema called "". [ [http://www.sensesofcinema.com/contents/cteq/06/38/hearts_of_age.html “The Hearts of Age,” Senses of Cinema] ]

Welles cast as the star of the production. Other roles were given to Mercury Theatre actors including Eustace Wyatt, Edgar Barrier, Ruth Ford, and . Welles' wife, Virginia Nicholson, appeared in the film under the name Anna Stafford. Bit parts were given to Welles' Mercury Theatre producer , assistant director John Berry, composer and the New York Herald Tribune’s drama critic Herbert Drake; Welles gave himself a small role as a . Among the uncredited extras for a crowd sequence was a young . [ [http://books.google.com/books?id=gFp8S8Tf-dQC&pg=PA102&lpg=PA102&dq=%22Too+Much+Johnson%22+%22Orson+Welles%22&source=web&ots=q9giqeIqvn&sig=9NzOuSDkYk2G1_x_bkYyV0Gr1fE&hl=en&sa=X&oi=book_result&resnum=8&ct=result#PPA103,M1 “What Ever Happened to Orson Welles?” by Joseph McBride, Google Books] ]

Paul Dunbar, a newsreel cameraman for Pathé News, was the film’s cinematographer. Location photography took place in ’s and . Additional shooting took place on a day-trip excursion boat and at locations in , and . Interior shots were set up at a studio in the . [Cowie, Peter. “The Cinema of Orson Welles.” 1973, A.S. Barnes & Co.] For the Cuban plantation, Welles created a miniature structure next to a papier-mâché volcano, with store-bought tropical plants to suggest the exotic Caribbean flora.

Welles spent ten days shooting "Too Much Johnson", which resulted in approximately 25,000 feet of film. He edited the footage on a in his suite at the St. Regis Hotel in New York City, and John Houseman later recalled visitors had to “wade knee-deep through a crackling sea of inflammable film.”

During post-production, Welles ran into financial problems relating to his cast (who were not originally paid for the film shoot) and the film laboratory (which refused to deliver the processed film until it received payment). Welles also received an attorney’s letter from informing him that the studio owned the film rights to "Too Much Johnson", and that public presentation of his film would require payment to the studio.

Welles initially planned to present the stage-and-film mix of "Too Much Johnson" at the Stony Creek Theatre in as a pre-Broadway trial run, but discovered that the theater's ceiling was too low to allow for film projection. The show opened on August 16, 1938, without the filmed sequences. Audience and critical reaction to the show was poor and Welles opted not to attempt a Broadway version of the show.

The rediscovery and loss of the film

Welles never completed the editing of "Too Much Johnson" and put the footage in storage. He rediscovered the footage three decades later at his home outside of , . "I can't remember whether I had it all along and dug it out of the bottom of a trunk, or whether someone brought it to me, but there it was," he later recalled. "I screened it, and it was in perfect condition, with not a scratch on it, as though it had only been through a projector once or twice before. It had a fine quality. Cotten was magnificent, and I immediately made plans to edit it and send it to Joe as a birthday present."

Welles, however, never allowed the footage to be seen publicly, stating the film would not make sense outside of the full context of the Gillette play. [ [http://www.jstor.org/pss/1210377 “Welles Before Kane” by Joseph McBride, University of California Press] ] In 1971, a fire broke out at Welles' home and the only known print of "Too Much Johnson" was destroyed. [ [http://www.filmthreat.com/index.php?section=features&Id=441 “Film Threat’s Top 10 Lost Films,” Film Threat January 25, 2001] ]