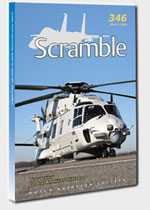 "Scramble" is an aviation magazine, specifically aimed at aircraft spotters, and covers both civil and military aviation. Although published in The Netherlands, it is fully in English.

It is published on a monthly basis by the Dutch Aviation Society, a non-profit foundation.

Started as a small magazine for the local spotters scene near , the first issue appeared in 1979, at that time still called 06-24 Nieuws, after one of the s at Schiphol. It rapidly grew to a more nation-wide orientated magazine and also started to include topics and news on military aviation, which gave cause to a name change to the current name in January 1981.

As of January 2007 the language was changed from Dutch to English to cater for the increasing number of foreign subscribers, opposed to declining numbers in The Netherlands. It still is completely run and edited by volunteers, currently approximately 50.