Hague Convention on the Civil Aspects of International Child Abduction

Hague Convention on the Civil Aspects of International Child Abduction

The Hague Convention on the Civil Aspects of International Child Abduction, or Hague Abduction Convention is a multilateral treaty developed by the Hague Conference on Private International Law that provides an expeditious method to return a child internationally abducted from one member nation to another. Proceedings on the Convention concluded 25 October 1980 and the Convention entered into force between the signatory nations on 1 December 1983. The Convention was drafted to ensure the prompt return of children who have been abducted from their country of habitual residence or wrongfully retained in a contracting state not their country of habitual residence.[1]

The primary intention of the Convention is to preserve whatever status quo child custody arrangement existed immediately before an alleged wrongful removal or retention thereby deterring a parent from crossing international boundaries in search of a more sympathetic court. The Convention applies only to children under the age of 16.

As of October 2011, 86 States are party to the convention.[2] In 2011 the treaty entered into force for Andorra, Gabon, Russia and Singapore.

The Convention does not provide any substantive rights. The Convention provides that the court in which a Hague Convention action is filed should not consider the merits of any underlying child custody dispute, but should determine only that country in which those issues should be heard. Return of the child is to the member nation rather than specifically to the left-behind parent.

The Convention mandates return of any child who was a “habitual resident” in a contracting nation immediately before an action that constitutes a breach of custody or access rights.[3] The Convention provides that all Contracting States, as well as any judicial and administrative bodies of those Contracting States, “shall act expeditiously in all proceedings seeking the return of a children” and that those institutions shall use the most expeditious procedures available to the end that final decision be made within six weeks from the date of commencement of the proceedings.[4]

The Convention provides that the removal or retention of a child is “wrongful” whenever:

"a. It is in breach of rights of custody attributed to a person, an institution or any other body, either jointly or alone, under the law of the State in which the child was habitually resident immediately before the removal or retention; and

"b. at the time of removal or retention those rights were actually exercised, either jointly or alone, or would have been so exercised but for the removal or retention." These rights of custody may arise by operation of law or by reason of a judicial or administrative decision, or by reason of an agreement having legal effect under the law of the country of habitual residence.[5]

"From the Convention's standpoint, the removal of a child by one of the joint holders without the consent of the other, is . . . wrongful, and this wrongfulness derives in this particular case, not from some action in breach of a particular law, but from the fact that such action has disregarded the rights of the other parent which are also protected by law, and has interfered with their normal exercise."[6]

The Convention mandates return of any child who was “habitually resident” in a contracting nation immediately before an action that constitutes a breach of custody or access rights. The Convention does not define the term “habitual residence,” but it is not intended to be a technical term. Instead, courts should broadly read the term in the context of the Convention’s purpose to discourage unilateral removal of a child from that place in which the child lived when removed or retained, which should generally be understood as the child’s “ordinary residence.” The child’s “habitual residence” is not determined after the incident alleged to constitute a wrongful removal or retention. A parent cannot unilaterally create a new habitual residence by wrongfully removing or sequestering a child. Because the determination of “habitual residence” is primarily a “fact based” determination and not one which is encumbered by legal technicalities, the court must look at those facts, the shared intentions of the parties, the history of the children’s location and the settled nature of the family prior to the facts giving rise to the request for return.[7]

The Convention provides special rules for admission and consideration of evidence independent of the evidentiary standards set by any member nation. Article 30 provides that the Application for Assistance, as well as any documents attached to that application or submitted to or by the Central Authority are admissible in any proceeding for a child's return.[8] The Convention also provides that no member nation can require legalization or other similar formality of the underlying documents in context of a Convention proceeding.[9] Furthermore, the court in which a Convention action is proceeding shall “take notice directly of the law of, and of judicial or administrative decisions, formally recognized or not in the State of habitual residence of the child, without recourse to the specific procedures for the proof of that law or for the recognition of foreign decisions which would otherwise be applicable" when determining whether there is a wrongful removal or retention under the Convention.[10]

The Convention limits the defenses against return of a wrongfully removed or retained child. Those defenses are:

(a) by preponderance of evidence, that Petitioner was not “actually exercising custody rights at the time of the removal or retention” under Article 13; or

(b) by preponderance of the evidence, that Petitioner “had consented to or acquiesced in the removal or retention” under Article 13; or

(c) by preponderance of the evidence, that more than one year has passed from the time of wrongful removal or retention until the date of the commencement of judicial or administrative proceedings, under Article 12; or

(d) by preponderance of the evidence, that the child is old enough and has a sufficient degree of maturity to knowingly object to being returned to the Petitioner and that it is appropriate to heed that objection, under Article 13; or

(e) by clear and convincing evidence, that “there is grave risk that the child’s return would expose the child to physical or psychological harm or otherwise place the child in an intolerable situation,” under Article 13(b); or

(f) by clear and convincing evidence, that return of the child would subject the child to violation of basic human rights and fundamental freedoms, under Article 20. 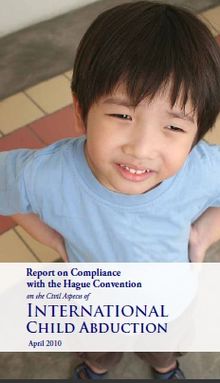 2010 U.S. Report on Compliance with the Hague Abduction Convention [11]

Noncompliance with the terms and spirit of the Hague Convention has been a particularly difficult problem in the practical implementation of the Convention. In 2009, the United States declared Brazil, Chile, Honduras, Greece and Mexico displayed "patterns of non-compliance" or "noncompliance".[11]

The case of Sean Goldman, a four year old boy abducted to Brazil, gained widespread media attention after the abducting mother died during the birth of another child and her new husband and family, powerful lawyers with links to the Brazilian elite, attempted to adopt the child and deny access to the legitimate father in contravention of the Convention.

Interpretation of article 13b

The principal purpose of the Abduction Convention is to cause the prompt return of a child to his or her "habitual residence." In certain exceptional cases under Article 13b, the court's mandatory return obligation is changed to a discretionary obligation, specifically, "the judicial or administrative authority of the requested State is not bound to order the return of the child if the person, institution or other body which opposes its return establishes that there is a grave risk that his or her return would expose the child to physical or psychological harm or otherwise place the child in an intolerable situation." The duty to return a child is however not abrogated by a finding under Art. 13(b) but merely changes from mandatory to discretionary. Since the general intent of the Convention is to cause the return of a child to his or her "habitual residence," unless there are some powerful and compelling reasons otherwise the court should normally and routinely exercise its discretion and return the child to his or her "habitual residence".[says who?]

In the primary source of interpretation for the Convention, the Explanatory Report, Professor E. Perez-Vera noted the following:

"it would seem necessary to underline the fact that the three types of exception to the rule concerning the return of the child must be applied only so far as they go and no further. This implies above all that they are to be interpreted in a restrictive fashion if the Convention is not to become a dead letter. In fact, the Convention as a whole rests upon the unanimous rejection of this phenomenon of illegal child removals and upon the conviction that the best way to combat them at an international level is to refuse to grant them legal recognition. The practical application of this principle requires that the signatory States be convinced that they belong, despite their differences, to the same legal community within which the authorities of each State acknowledge that the authorities of one of them - those of the child's habitual residence - are in principle best placed to decide upon questions of custody and access. As a result, a systematic invocation of the said exceptions, substituting the forum chosen by the abductor for that of the child's residence, would lead to the collapse of the whole structure of the Convention by depriving it of the spirit of mutual confidence which is its inspiration."

In spite of the spirit and intent of the Convention as conveyed by the Convention itself and further reinforced by the Perez-Vera report, Article 13b is frequently used by abductors as a vehicle to litigate the child's best interests or custody. Although Article 13(b) inquiries are not intended to deal with issues or factual questions appropriate for custody proceedings, many countries use article 13b to request psychological profiles, detailed evaluations of parental fitness, evidence concerning lifestyle and the nature and quality of relationships.[12]

The map shows the Contracting States to the Convention as October 2011.