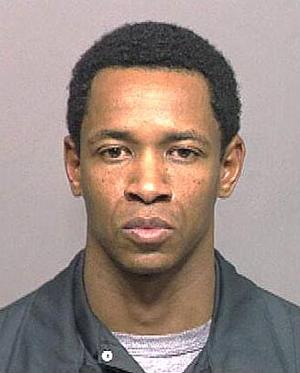 John Allen Muhammad (b. , ) is a from the United States. With his younger partner, , he carried out the 2002 , killing 10 people. Muhammad and Malvo were ed in connection with the attacks on , , following tips from alert citizens. His trial for one of the murders (the murder of Dean Harold Meyers in ) began in October 2003, and the following month, he was found guilty of capital murder. Four months later he was sentenced to death. While awaiting execution in Virginia, in August 2005, he was extradited to to face some of the charges there, for which he was convicted of six counts of first-degree on , . Upon completion of the trial activity in Maryland, it was planned that he next be returned to Virginia's death row unless some agreement is reached with another state or the District of Columbia seeking to try him. As of October 2006, he has not been tried on additional charges in other Virginia jurisdictions, and faces potential trials in three other states and the involving other deaths and serious woundings.

Born John Allen Williams in , John Allen enlisted in the Louisiana National Guard in 1978 and, after seven years of service, enlisted in the U.S. Army in 1985. While in the Army, Muhammad was trained as a mechanic, truck driver and specialist metalworker. He qualified as an "expert" with the M16, the Army's standard infantry rifle. This rating is the Army's highest of three levels of marksmanship for a typical soldier. He was discharged from military service following the , as a sergeant, in 1994. [ [http://archives.cnn.com/2002/US/10/24/muhammad.profile/index.html Muhammad a Gulf War vet, Islam convert] ]

Changing his name to Muhammad in October 2001, he was a member of the for a time; friends allege Muhammad helped provide security for "" in 1995, but Farrakhan has publicly distanced himself and his organization from Muhammad's crimes [ [http://www.finalcall.com/artman/publish/article_2285.shtml Minister Louis Farrakhan addresses sniper arrest] ] . Muhammad moved out of the country and spent time in around 1999, apparently engaging in credit card and immigration document fraud activities. It was during this time that he became close with , who later acted as his partner in the killings.

After his arrest, authorities also claimed that Muhammad admitted that he admired and modeled himself after and , and approved of the . One of Malvo's psychiatric witnesses testified in his trial that Muhammad had indoctrinated him into believing that the proceeds of the extortion attempt would be used to begin a new nation of only young, "pure" black people somewhere in .

Muhammad is twice d; his second wife, Mildred Muhammad, sought and was granted a . Muhammad was arrested on federal charges of violating the restraining order against him by possessing a weapon. Defense attorneys in the Malvo trial and the prosecution in Muhammad's trial argued that the ultimate goal of the killings was to kill Mildred so he would regain custody of his three children. [ [http://www.cnn.com/2003/LAW/12/01/sprj.dcsp.malvo.trial/index.html Sniper's ex-wife: Muhammad was 'magnet' for children] ]

Police followed a lead in which an anonymous caller (presumably Muhammad) told a to tell the police to check out a liquor store robbery-murder that had occurred in . Investigators responding to that crime scene found one of the suspects had dropped a magazine with his fingerprints on it, these were subsequently identified as belonging to a 17-year-old n immigrant , whose prints were on file with the INS. Malvo was known to associate with Muhammad. They had lived together in for around one year, where Malvo used the alias John Lee Malvo.Fact|date=April 2007 Identifying Muhammad led to the discovery that he had purchased a former police car, a blue Chevrolet Caprice, in New Jersey on , . A lookout broadcast to the public on that vehicle resulted in their arrest when it was spotted parked in a Maryland rest area on .

These are the names of the victims who were murdered or wounded in the attacks. This list is in chronological order.

In October 2003, Muhammad went on trial for the murder of Dean Meyers at a Prince William County service station near the city of Manassas. The trial had been moved from Prince William County, to Virginia Beach, approximately 200 miles away. Muhammad was granted the right to represent himself in his defense, and dismissed his legal counsel, though he immediately switched back to having legal representation after his opening argument. Muhammad was charged with , , conspiracy and the illegal use of a firearm, and faced a possible death sentence. Prosecutors said the shootings were part of a plot to extort $10 million from local and state governments. The prosecution said that they would make the case for 16 shootings allegedly involving Muhammad. The terrorism charge against Muhammad required prosecutors to prove he committed at least two shootings in a three-year period.

The prosecution called more than 130 witnesses and introduced more than 400 pieces of evidence intended to prove that Muhammad had undertaken the shooting spree and ordered Malvo to help carry it out. That evidence included a rifle, found in Muhammad's car, that has been linked by s not only to 8 of the 10 killings in the Washington area but also to 2 others, in and ; the car itself, which was modified, prosecutors say, so that a sniper could shoot from inside the trunk; and a computer, also found in the car, that contained maps with icons pinpointing shooting scenes.

There were also witness accounts that put Muhammad across the street from one shooting and his car near the scene of several others. And there was a recorded phone call to a police hotline in which a man, his voice identified by a detective as Muhammad's, demanded money in exchange for stopping the shootings.

Muhammad's defense asked the court to drop the capital murder charges due to the fact that there was no direct evidence. Malvo's fingerprints were on the Bushmaster rifle found in Muhammad's car, and genetic material from Muhammad himself was also discovered on the rifle. But the defense contended that Muhammad could not be put to death under Virginia's so-called trigger-man law unless he actually pulled the trigger to kill Meyers, and no one testified that they saw him do so.

On , , by verdict of his , Muhammad was convicted in Virginia of all four counts in the indictment against him: capital murder for the shooting of Dean H. Meyers; a second charge of capital murder under 's antiterrorism statute, for homicide committed with an intent to terrorize the government or the public at large; conspiracy to commit murder; and the illegal use of a firearm.

In the penalty phase of the trial, the jury after five hours of deliberation over two days unanimously recommended that Muhammad should be sentenced to death. On , , a Virginia judge agreed with the jury's recommendation and sentenced John Allen Muhammad to death.

It is not clear how many other jurisdictions will be allowed to try him on the capital charges they have pending before he is executed in Virginia. In May 2005, Maryland and Virginia reached an agreement to allow his extradition to face Maryland charges, but Muhammad was fighting the action legally. He was held at the maximum security near Waverly in , which houses Virginia's inmates. While awaiting execution in Virginia, in August 2005, he was extradited to to face some of the charges there.

On , , a jury found John Allen Muhammad guilty of six counts of murder in Maryland. In return, he was sentenced to six consecutive life terms without possibility of parole on , . Whether or not Alabama, Arizona, Louisiana, and Washington State will move to try Muhammad, given his death sentence for murder in Virginia, remains unclear. In 2006, Malvo confessed that the pair also killed victims in California, Arizona, and Texas, making 17 victims.

On , , it was revealed that Muhammad has asked prosecutors in a letter to help him end legal appeals of his conviction and death sentence "so that you can murder this innocent black man." An appeal filed by Muhammed's defense lawyers in April 2008 cited evidence of brain damage that may render Muhammad incompetent to make legal decisions, and that he should not have been allowed to represent himself at his Virginia trial. [ [http://www.cnn.com/2008/CRIME/05/06/dc.sniper.ap/index.html D.C. sniper wants to drop death row appeals] ]

In 2003, Malvo and Muhammad were named in a major civil lawsuit by the Legal Action Project of the on behalf of two of their victims who were seriously wounded and the families of some of those murdered. Although Malvo and Muhammad were each believed to be indigent, codefendants and contributed to a landmark $2.5 million out-of-court settlement in late 2004.

The real plan, as told by Lee Boyd Malvo

In 's May 2006 trial in , took the stand and confessed to a more detailed version of the pair's plans. Malvo, after extensive psychological counseling, admitted that he was lying at the earlier trial where he had admitted to being the triggerman for every shooting. Malvo claimed that he had said this in order to protect John Allen Muhammad from the potential death penalty, because it was more difficult to achieve the death penalty for a minor. Malvo said that he wanted to do what little he could for the families of the victims by letting the full story be told. In his two days of testimony, Malvo outlined many very detailed aspects of all the shootings.

Part of his testimony concerned John Allen Muhammad's complete multiphase plan. His plan consisted of three phases in the and Baltimore metro areas. Phase one consisted of meticulously planning, mapping, and practicing their locations around the DC area. This way after each shooting they would be able to quickly leave the area on a predetermined path, and move on to the next location. John Allen Muhammad's goal in phase one was to kill 6 white people a day for 30 days (180 per month). Malvo went on to describe how phase one did not go as planned due to heavy traffic and the lack of a clear shot and/or getaway at different locations.

Phase two was meant to be moved up to Baltimore. Malvo described how this phase was close to being implemented, but never was carried out. Phase Two was intended to begin by killing a pregnant woman by shooting her in the abdomen. The next step would have been to shoot and kill a police officer. Then, at the officer's funeral, they were to create several improvised explosive devices complete with shrapnel. These explosives were intended to kill a large number of police, since many police would attend another officer's funeral.

The last phase was to take place very shortly after, if not during, Phase Two. The third phase was to extort several million dollars from the government. This money would be used to finance a larger plan. The plan was to travel north in to . Along the way they would stop in s and orphanages recruiting other impressionable young boys with no parents or guidance. John Allen Muhammad thought he could act as their father figure as he did with . Once he recruited a large number of young boys and made his way up to Canada, he would begin their training. Malvo described how John Allen Muhammad intended to train all these boys with weapons and stealth, as he had been taught. Finally, after their training was complete, John Allen Muhammad would send them out across the to carry out mass shootings in many different cities, just as he had done in Washington, D.C. and Baltimore. [cite news
last = Mount
first = Harry
title = The sniper's plan: kill six whites a day for 30 days
publisher = Telegraph
date =
url = http://www.telegraph.co.uk/news/main.jhtml?xml=/news/2006/05/25/wsnipe25.xml&sSheet=/news/2006/05/25/ixnews.html
accessdate = 2007-07-17] [cite news
last = Montaldo
first = Charles
title = Malvo Outlines Snipers' Plan of Terror
publisher = About.com
date =
url = http://crime.about.com/b/a/256952.htm
accessdate = 2007-07-17] [cite news
last = Ahlers
first = Mike
title = Malvo: Muhammad 'made me a monster' Younger man cross-examined by former mentor in sniper trial
publisher = CNN
date =
url = http://www.cnn.com/2006/LAW/05/23/sniper.trial/index.html
accessdate = 2007-07-17]