The Chemin de Fer du Blanc-Argent (BA) is a 1,000 mm (3 ft 3 3⁄8 in) gauge railway in the Centre region of France, part of which is still open to traffic, whilst another section is now operated as a heritage railway.

The BA was conceived as a standard gauge cross country route linking various lines of the Chemin de Fer de Paris à Orléans (PO). Although the scheme was abandoned, the PO built the line as a single track metre gauge railway, linking Argent with Le Blanc, and running through the departments of Loiret, Loir-et-Cher and Indre.[1]

The system had at total length of 191 kilometres (119 mi), with headquarters at Romorantin. The system opened in 1901 and remained intact until 1951 when the first closures took place. All traffic was steam hauled until the early 1930s, when Billard railcars were introduced to handle some of the passenger traffic. Steam locomotives were operated until the 1950s. In 1981, the Centre region and SNCF agreed to rebuild the four Verney railcars, and built two new ones. The timetable was reorganised to give better connections with the SNCF. The BA became part of TER in 1987. Freight traffic on the BA ended in 1989.[2] The last regular freight ran in 1989.[1]

The CFBA was divided into five sections operationally.

The section between Salbris and Romorantin is still open to passengers.[1]

The section between Romorantin and Valençay is still open.[1]

The section between Valençay and Luçay-le-Mâle closed in Oct. 2009 after a safety inspection. There is a replacement bus service.

The section between Buzançais and Le Blanc closed to passengers in September 1953 and freight in December 1953.[3] 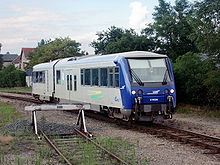