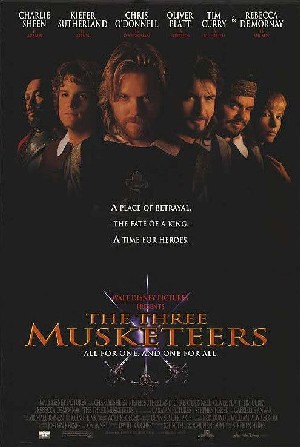 "The Three Musketeers" is a 1993 film version of the classic story from , directed by and starring , , and .

The film is based on the novel "" ("Les Trois Mousquetaires") by . It recounts the adventures of d'Artagnan on his quest to join the three title characters in becoming a musketeer. The adaptation greatly simplifies and alters the story, and takes considerable liberties with French history.

The relationship between Athos and is altered to make the two characters more sympathetic. In the book Milady just married Athos to gain a fortune and when he found out about her he hung her from a tree and left her for dead. She survived and escaped, plotting revenge on Athos. In the film, Milady actually loves Athos and when he finds out that she is a criminal he banishes her from his land but later realizes his mistake. After being cast out by Athos, Milady becomes an evil person in the novel. Her role in this film is a good deal more sympathetic; she helps the Musketeers by giving them the information they need just before she commits suicide by jumping off a cliff.

Following in his late father’s footsteps, () sets off to in hopes of becoming a member of the , a band of men sworn to serve and protect the . D’Artagnan is pursued by Gerard and his , who accuse him of blemishing their sister’s .

At Musketeer headquarters, Captain Rochefort and the cardinal’s guards have disbanded the musketeers per the orders of (), the King’s minister, ostensibly to help fight in an impending war with . Rochefort confides to the Cardinal that there are three musketeers that have refused to relinquish their duties: Athos (), (), and ().

Upon reaching Paris, the headstrong d'Artagnan has a series of chance physical encounters with these same three musketeers, resulting in d'Artagnan accepting a with each one that very day.

D’Artagnan arrives at the Ruins for his first duel and, much to his surprise, Athos, Porthos and Aramis reveal themselves as musketeers. But before the duels can commence, the captain of the cardinal's guard appears with orders to arrest the resistant musketeers.

During an escape attempt, d’Artagnan is able to overhear a conversation between Cardinal Richelieu and (), as the cardinal asks that she deliver a signed to the of . Before he can get a view of the cardinal's , d’Artagnan is caught at the doorway and sent for the next morning.

At the execution, d’Artagnan is saved by Porthos and Aramis, and make a getaway in the Cardinal’s personal coach. While d’Artagnan reveals Richelieu’s plans, the three musketeers decide to intercept Richelieu’s spy to prove that the Cardinal is guilty of treason.

That night d'Artagnan and the three musketeers stop at an inn to rest. Athos tells a story of a that fell in love with a beautiful woman, but upon discovering that she was branded for execution, betrayed her by giving her up to the authorities.

The party decides to split up during a skirmish. Athos sends d’Artagnan to ride ahead and intercept the cardinal's spy and the treaty, but d'Artagnan passes out from exhaustion in the middle of the road. When he wakes up, he finds he is stripped of his weapons and clothes and Milady de Winter is there to rouse and seduce him. Not knowing who the spy is, d’Artagnan tells her of his plans, whereupon she tries to kill him. Instead, d’Artagnan convinces her to keep him alive. When Milady de Winter’s party tries to escape by boat to England, they find that the crew has been killed by Porthos and Aramis, and another skirmish ensues.

Milady attempts to run away, but is confronted by the newly arrived Athos, who recognizes her and calls her Sabine. He is astonished to see her, as he thought she was dead. It is revealed that he was the count of his story and that Sabine was the wife he betrayed. Milady de Winter is then apprehended by her former brother-in-law, as Sabine is responsible for killing her husband, Lord de Winter, and sentenced to death by execution.

The three musketeers retrieve the treaty and learn that the Cardinal is planning something on King Louis’ birthday, though it does not specify what in the treaty. Athos attempts to learn what it is by visiting Sabine in her cell. She asks if he can stop her execution tomorrow. Athos cannot and Sabine does not reveal what the Cardinal’s plan is.

During the execution, just as Sabine is lowering her head for the executioner, Athos stops him and begs forgiveness from Sabine for his betrayal. She accepts and whispers to Athos Richelieu’s plans to assassinate King Louis before jumping off a cliff to her death.

After learning of the Cardinal’s plan, the three musketeers set out to re-band the rest of the musketeers, in secret, for the king’s birthday celebration. Richelieu and Rochefort hire a sniper to assassinate the king. During the assembly, d'Artagnan is able to stop the sniper from killing the king, but the shot narrowly misses its target and the Cardinal blames the musketeers in the crowd for the attempted assassination.

Athos, Porthos and Aramis drop their cloaks to show their musketeer tunics and face the Cardinal’s guards. Meanwhile, men from the crowd rush to their sides and reveal that they are musketeers. A battle between the musketeers and the Cardinal’s guards engulfs the palace. Richelieu takes the king and queen as hostages and tries to take them to the dungeon below. Aramis confronts the Cardinal to stop him, but Richelieu shoots him in the chest and makes his way into the passage to the dungeon.

Athos battles with Rochefort, a former musketeer, and d'Artagnan interrupts the battle to save Athos and fight Rochefort himself. d'Artagnan is able to overcome Rochefort and retrieve his father’s sword from him. Athos joins Porthos, who is at the unconscious Aramis’ side, and as they search for his wound, Aramis suddenly wakes, and it is revealed that the bullet was stopped by the huge cross that Aramis wears. They follow Richelieu into the dungeons and split up to stop him from killing the king and queen.

In the dungeon, Athos and Porthos just miss the Cardinal as his boat starts on the underground river. Athos says that they have proof of Richelieu’s treason, but Richelieu does not seem to care. The boatman then casts off his cloak and the Cardinal is astonished to see that it is Aramis. Aramis attempts to apprehend the Cardinal, but King Louis stops him and punches Richelieu, knocking him in to the river. It is the last time Richelieu appears in the story.

During d'Artagnan’s duel, Rochefort reveals that he was the one that murdered d’Artagnan's father, and d'Artagnan, from anger, renews his efforts to kill him. Rochefort fights back and is able to disarm d'Artagnan. Just as Rochefort is about to deal d’Artagnan the final blow, Constance appears to the side and slides d’Artagnan’s sword back to him. d'Artagnan kills Rochefort just as he is about to strike, and avenges his father’s death.

The musketeers are reinstated by the king. Accompanied by Athos, Aramis and Porthos, d'Artagnan is honored in a ceremony. King Louis makes him a musketeer. Constance, who has remained by the queen’s side, runs to him and gives him a big embrace, impressing both Aramis and Porthos.

was originally sought for the role of .

, and all endured six weeks of fencing and riding lessons. had to miss all this out as he was then embroiled in the filming of (1993).

turned down the role that ultimately went to . , and were also sought out by Disney for parts in the film.

A rival TriStar version was also in development at the same time as this film, with star and director attached. Ultimately, it fell through. had also been approached to play in that version as well.

Some sequences were shot in Cornwall, England. A small woods called Golitha Falls was used in one sequence when the musketeers are being pursued by guards. The small harbour village of Charlestown is home to the galleon that was used in a night-shoot.

Movie critic christened this version "Young Swords", as it reunited Sheen and Sutherland, both of "" fame. More generally, the reception to this film can best be described as lukewarm. The website gives only a 30% fresh rating, indicating that this film was panned by 2 out of 3 critics.

co-wrote the #1 hit "All for Love" for the movie's soundtrack, performing it with and Sting.

The original music score is composed by and the cinematography is by .

In the scene where d'Artagnan is about to be beheaded and the executioner reveals himself to be Porthos, Porthos claims "This axe was a gift to me by the Tzarina of Tokyo" which is a running gag with absurd claims that Porthos makes throughout the film. However, at this time was known as and wouldn't receive its modern name until after the in the 19th Century.

In the scene where d'Artagnan stabs Rochefort, he orginally stabs him in the stomach. After it cuts back to d'Artagnan for a moment, we see that the blade has magically moved to Rochefort's heart area when the camera cuts back to Rochefort. Rochefort then states "I may have been mistaken" after intially stating the d'Artagnan would never have made a Musketteer.