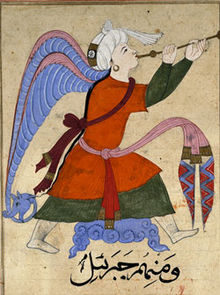 Angels (Arabic: ملائكة , Malāʾikah; (singular) ملاك Malāk) are mentioned many times in the Qur'an and Hadith. Islam is clear on the nature of angels in that they are messengers of God. They have no free will, (unlike humans or jinn) and can do only what God orders them to do. An example of a task they carry out is that of testing of individuals by granting them abundant wealth and curing their illness.[2] Believing in angels is one of the six Articles of Faith in Islam.

For other angelic hierarchies, see Hierarchy of angels.

There is no standard hierarchical organization in Islam that parallels the division into different "choirs" or spheres, as hypothesized and drafted by early medieval Christian theologians. Most[who?] Islamic scholars agree that this is an unimportant topic in Islam, especially since such a topic has never been directly mentioned or addressed in the Qur'an. However, it is clear that there is a set order or hierarchy that exists between angels, defined by the assigned jobs and various tasks to which angels are commanded by God. The angel Jibraaiyl (Gabriel) is the most recognizable angel, as in Islam this angel delivers the message of God (Allah) to the Islamic prophet, Muhammad. This message is the Qur'an. Angels can take on different forms, including human.[3]

Some scholars suggest that Islamic angels can be grouped into fourteen categories as follows, of which numbers 2-5 are considered archangels. Due to varied methods of translation from Arabic and the fact that these angels also exist in Christian contexts and the Bible, several of their Christian and phonetic transliteral names are listed:

The Qur'an also mentions angels who God has chosen to punish the sinful in hell, these angels take no pity on punishing them as they do what the Lord has commanded them to precisely and perfectly. A verse stipulates this:

O ye who believe! save yourselves and your families from a Fire whose fuel is Men and Stones, over which are (appointed) angels stern (and) severe, who flinch not (from executing) the Commands they receive from Allah, but do (precisely) what they are commanded.
—Qur'an, sura 66 (At-Tahrim) ayah 6[13]

Also the number of Angels guarding Hell are mentioned as nineteen:

Over it are Nineteen.
And We have set none but angels as Guardians of the Fire; and We have fixed their number only as a trial for Unbelievers,- in order that the People of the Book may arrive at certainty, and the Believers may increase in Faith,- and that no doubts may be left for the People of the Book and the Believers, and that those in whose hearts is a disease and the Unbelievers may say, "What symbol doth Allah intend by this?" Thus doth Allah leave to stray whom He pleaseth, and guide whom He pleaseth: and none can know the forces of thy Lord, except He and this is no other than a warning to mankind.
—Qur'an, sura 74 (Al-Muddathir) ayat 30-31[14]

The Qur'an also mentions that angels have qualities that may be typified by the word wings: "All praise and thanks are due to Allah the Originator of the Heavens and Earth, Who made the angels messengers with wings, two or three or four..." .|Qur'an, sura 35 (At-Fatir or Al-Mala'ikah) ayah 1[15]

However, according to hadith collected by Muhammad al-Bukhari, Muhammad said that Gabriel had 600 wings;

Narrated Abu Ishaq-Ash-Shaibani
I asked Zir bin Hubaish regarding the Statement of Allah: "And was at a distance Of but two bow-lengths Or (even) nearer; So did (Allah) onvey The Inspiration to His slave (Gabriel) and then he (Gabriel) Conveyed (that to Muhammad). (53.9-10)[16] On that, Zir said, "Ibn Mas'ud informed us that the Prophet had seen Gabriel having 600 wings."
—Sahih al-BukhariVolume 4, Book 54, Number 455[17]

Praise be to Allah, Who created (out of nothing) the heavens and the earth, Who made the angels, messengers with wings,- two, or three, or four (pairs): He adds to Creation as He pleases: for Allah has power over all things.
—Qur'an, sura 35 (Fatir) ayat 1[18]

The preceding sentence does not imply that all angels have two to four wings. Most notably, archangels (namely Gabriel and Michael) are described as having thousands of wings.[citation needed] The angels also accompanied Muhammad up to Jannah (Heaven) when he received commands from God. Instead of riding on an angel, Muhammad rode a creature called a Buraq whose stride spans from horizon to horizon.

In relation to some narrations (riwayah), it is stated that the angels had accompanied, and had been in the presence of Muhammad when he was born. A classic example of this is, when Muhammad was born, then in some narrations it has been said that Gibrael had swung the cot, in which Muhammad lay.[citation needed]

The following is a Quranic verse that mentions the meeting of an angel with Mary, mother of Jesus: Surah Aal ‘Imran Chapter 3 verse 45

Behold! The angels said: O Mary! God giveth thee glad tidings of a Word from Him: his name is the Christ Eisa the son of Mariam, held in honour in this world and the Hereafter and of (the company of) those Nearest to God.

Muhammad, speaking of the magnitude of the angel Gabriel, has said that his wings spanned from the Eastern to the Western horizon.[citation needed]

Verses in the Qur'an that directly name Angels

Gabriel (Jibreel) and Michael (Mikaa'eel) are mentioned early on the Qur'an in Sura Al-Baqarah:

Another angel, Maalik is defined in the Qur'an as a being who is the warden of Hell. However Maalik is not an evil angel, nor a fallen one, a notion Islam rejects, rather Maalik is merely doing what he is commanded to do by God. In Islam Iblīs or Shayṭan (the Devil or Satan) is considered by many to be a jinn rather than an fallen angel, since he questioned God when He ordered the angels to prostrate themselves before Adam, an act that suggested he possesses free will. An alternative view holds that rather than "defying" God, Iblis was acting in a manner predetermined by God.

Two other Angels are also mentioned directly in the Qur'an: Haaroot and Maaroot (Harut and Marut):

Several angels such as Azrael, Israfil, Munkar and Nakir are not mentioned directly in the Qur'an but are explained further in the hadiths of Muhammad. They are also mentioned in traditional myths, however, they seldom retain complete originality from the hadith.[citation needed]