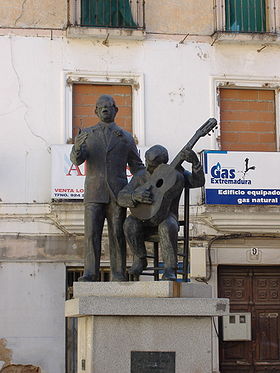 The Andalusian cadence is a term adopted from flamenco music for a chord progression comprising four chords descending stepwise.[1] It is otherwise known as the minor descending tetrachord. Traceable back to the Renaissance, its effective sonorities made it one of the most popular progressions in classical music

Despite the name it is not a true cadence (i.e., occurring only once, when ending a phrase, section, or piece of music[2]); it is most often used as an ostinato (repeating over and over again). It is heard in many rock songs (e.g. "Runaway" by Del Shannon), but also in Classical music, as in J.S. Bach's Chaconne from the Partita in D minor for solo violin, BWV 1004.

The upper tetrachord of minor scales varies: in C minor, the sixth may be A♭ or A while the seventh may be B♭ or B.[3] To avoid confusion the chords of the progression may have accidentals added. The Andalusian cadence may then be notated i – ♭VII – ♭VI – V rather than simply i – VII – VI – V. The ♭VII note and chord is called the subtonic.[2] In the final chord V the leading note replaces the subtonic.

A typical Andalusian cadence por arriba (i.e. in A minor). G is the subtonic and G♯ is the leading tone.

A popular melodic pattern of Ancient Greece[4] offers a possible starting point for the Andalusian cadence. Called the Dorian tetrachord, the sequence resembles the bass line of the chord progression developed centuries later. Some theorists consider that the same structure may have occurred earlier in Judah.[4][5] A sequence more or less close to the Greek tetrachord structure might have been known to the Moors in Southern Spain and spread from there through Western Europe. The French troubadours were influenced by the Spanish music.[4]

The Andalusian cadence known today, using triad chords, may be no earlier than the Renaissance, though the use of parallel thirds or sixths occurred from the 13th century.[6] Some sources state that the chord sequence was noted for the first time by Claudio Monteverdi in a choral work, Lamento della Ninfa, first published in the Eighth Book of Madrigals (1638) – other works in the same collection are known to have been played as soon as 1607.

The progression resembles the first four measures of the 15th century Passamezzo antico; i – ♭VII – i – V. The use of the ♭VI chord may suggest a more recent origin than the Passamezzo antico since the cadences i – ♭VII and ♭VII – i were popular in the late Middle Ages,[6] (see also double tonic) while ♭VII – ♭VI arose as a result of advancement in music theory.[citation needed] However, the absence of the leading tone from the ♭VII chord suggests that the progression originated before the tonal system in the modal approach of the time of Palestrina, where the tonic must be approached from chord V[7] whereas typical Baroque style would have avoided the flat VII and introduced dominant chords (♮VII or V chords,[2] to form cadences resolving upon a i chord).

A minor seventh would be added to the dominant "V" chord to increase tension before resolution (V7-i).[2] The roots of the chords belong to a modern phrygian tetrachord (the equivalent of a Greek Dorian tetrachord,[8] the latter mentioned above), that is to be found as the upper tetrachord of a natural minor scale (for A minor, they are: A G F E).

A remarkable fact about tetrachords was noticed since the Ancient times and rediscovered in early Renaissance: when a tetrachord features a semitone (half-step) between two of its tones, it is the semitone that will determine the melodic tendency of the given tetrachord or mode (when combining tetrachords).[9] If the semitone falls between the highest two steps, the melody tends to be ascending (e.g. major scales); a semitone between the lowest tones in the tetrachord involves a melody "inclined" to descend. This said, the Phrygian tetrachord, borrowed from traditional music of Eastern Europe and Anatolia,[9] is to be found also in the Andalusian cadence and sets the mentioned character (the semitone falls between [the roots of] V and ♭VI).

A rigorous analysis should note that many chord progressions are likely to date back from an epoch prior to early Baroque (usually associated with birth of tonality).[9] In such cases (also, that of the Andalusian cadence), explanations offered by tonality "neglect" the history and evolution of the chord progression in question. This is because harmonic analyses in tonal style use only two scales (major and minor) when explaining origins of chord moves. In exchange, the luxuriant modal system (i.e., the entirety of musical modes ever created and their specific harmonies – if existing[9]) offers various plausible origins and explanations for every chord move. However, most classical (Baroque or subsequent) and popular music which makes use of the given chord progression might treat it itself in a tonal manner.[2]

A number of musicians and theorists (of which, renowned guitarist Manolo Sanlúcar) consider the Andalusian cadence as a chord progression built upon the Phrygian mode.[11] Since tonality took the first chord in the progression for a tonic ("i"), the Phrygian notation (modal) of the cadence writes as following: iv – ♭III – ♭II – I (or, more commonly, but less correctly, iv – III – II – I[1]). Though tonal functions have little in common with the Phrygian mode, the four chords could be roughly equalized. (The Phrygian mode is like a natural minor with step two lowered;[3] however, step three switches between major and minor third, an equivalent to the subtonic/leading tone conflict in the tonal acceptation.) Thus, the "iv" corresponds to a subdominant chord, while "♭III" is the mediant and "I" is the tonic. The "♭II" chord has a dominant function,[10][11] and may be thought of as a tritone substitution of "V", i.e., the Neapolitan sixth chord.[3] (The only purpose for highlighting these "functions" is to compare between the modal and tonal views of the cadence. The mode involved in the cadence is not a pure Phrygian, but one whose third step occurs in both instances, minor and major third. This is unacceptable in tonality;[8] hence, tonal functions cannot be used. A common mistake occurs when the given mode is thought of as major, given that the tonic chord is major.[1] However, the Phrygian mode features a minor third and the "I" chord may be taken for a borrowed chord, i.e., a Picardy third.)

When the VI chord, which may be added between III and ♭II (iv-III-IV-♭II-I) and cadenced upon, is the most characteristic contrasting tonal area, similar by analogy to the relative major of a minor key[10].

The tonal system sets three main functions for the diatonic tertian chords: tonic (T), dominant (D) and subdominant (SD). Any sequence through different functions is allowed (e.g. T→D, SD→D), except for D→SD.[12] A tonal scale's degrees are as following: "I" and "VI" are tonic chords (of which, "I" is stronger; all final cadences end in "I"), "V" and "VII" are dominants (both feature the leading tone and "V" is more potent), "IV" and "II" are subdominant chords ("IV" is stronger).[2] ("III" isn't given a precise function, although it may replace a dominant in some cases.) All sequences between same-function chords, from the weaker member to the stronger (e.g. VII – V), are forbidden. When using the natural minor, dominant chords exchange their leading tone for a subtonic; as a result, their dominant quality is strongly undermined.[2]

A tonal insight on the Andalusian cadence leads to considering the "♭VII" a local exception: the subtonic it uses for a root should be, however, re-replaced by the leading tone before returning to "i". (The leading tone is heard in the "V" chord, as the chord's major third.) A "♭VII" would leave the dominant category (compare: "♮VII") and start acting to the contrary.[2] That is, a "♭VII" chord would now prefer moving to a subdominant rather than to a tonic chord. Yet, the Andalusian cadence brings about a limit condition for tonal harmony, with a ♭VII – ♭VI chord move.[12]

The Andalusian is an authentic cadence, because a dominant chord ("V") comes just before the tonic "i". (Using modal harmonies, the third, and not the fourth chord – "♭II" – acts as the dominant, substituted to tritone. Even so, the cadence stays authentic. The fourth chord itself is the tonic, so the cadence need not return to the tonal tonic, i.e. modal "iv".)[2]

The standard tuning in guitars determines most Flamenco music to be played only in a few keys. Of those, the most popular are the A minor and D minor (equivalent to E and A Phrygian, respectively)[1]. They are as following:

Using a capotasto or scordature, other keys can be obtained, mainly derived from the two basic keys. Flamenco guitarist Ramon Montoya and singer Antonio Chacón were among the first to use the new keys, and given distinctive names:[11]

The following works were ordered by the year of composition (only presumed, in some cases).

Of the 64 variations, 19 constitute a medial episode in parallel D major.[13] The chaconne form assumes an ostinato formula, whose period is usually four bars long. In Bach's work, the four-bar motif coincides with the descending Phrygian tetrachord and harmonies built upon vary to a certain extent, but mostly resemble the Andalusian cadence.[14]

Largely built from an Andalusian cadence ostinato, the chaconne starts in G minor and frequently modulates to other keys, however maintaining the cadence's pattern.

The Andalusian cadences in Bizet's Carmen are counted along with other "tricks" used to evoke the atmosphere of Spain; they are the more significant, knowing that Bizet never actually visited the country.[16]

Andalusian cadences were heavily used in all popular music genres during the sixties and slightly into the seventies. British rock bands The Kinks and Deep Purple were especially fond of it, while during the 70s Pink Floyd would allude to the progression in numerous songs, however not stating it in its pure form (see below). Songs of the early 1960s, such as the Ventures' 1960 hit "Walk, Don't Run", turned the Andalusian cadence iconic for surf rock music.

In the late seventies and eighties only a few hit singles made use of Andalusian cadences (probably the best known example is "Sultans of Swing" by English band Dire Straits). However, the 1990s brought about a revival of the progression, mainly with the growing interest in Flamenco and Latin music (recent examples include 2002 pop hit "Aserejé" a.k.a. "The Ketchup Song" by Spanish band Las Ketchup). On the contrary, a number of indie rock artists of the nineties (such as The Olivia Tremor Control) used Andalusian cadences to recreate the 1960s music mood.

Examples where the progression is somewhat altered

The following is a categorized list of musical examples wherein a chord progression quite similar to the Andalusian cadence occurs; while the items in the top of the list stay as close to a typical cadence, the examples which follow contain progressions where an Andalusian cadence is all the more difficult to recognise (roughly, sorted gradually).