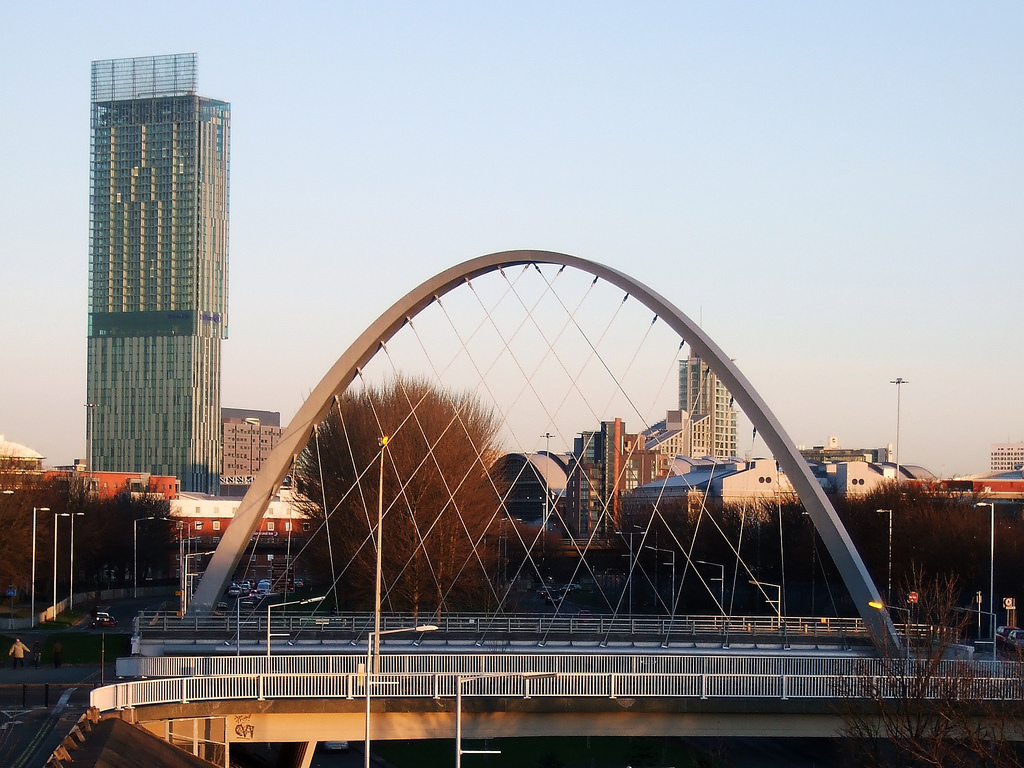 map_text =
map_width =
coordinates = coord|53|28|4.84|N|2|14|44.74|W|region:GB_type:landmark|display=inline,title
lat =
long =The Hulme Arch Bridge is a in , , . It supports Stretford Road as it passes over Princess Road, and is located at grid reference gbmappingsmall|SJ838968. The construction of the bridge formed part of the regeneration of the Hulme district of Manchester, both by re-establishing the former route of Stretford Road (which had been cut into two halves by the construction of Princess Road in 1969) and by providing a local . The location was previously occupied by a .

The bridge consists of a deck supported by cables from a single arch that spans the bridge diagonally. The design was selected in June 1995, with construction running between May 1996 and April 1997. It was opened on by .

Stretford Road was divided into two halves in 1969 by the construction of Princess Road. A footbridge was subsequently constructed, crossing Princess Road at the same place as the road previously ran.

The design of the bridge was selected via a two-staged, closed , commissioned by Hulme Regeneration Ltd and . The first stage of the competition was held in March 1995, and had six entries. The winning design was selected in June 1995, and was from s Chris Wilkinson Architects, with the being Ove Arup & Partners.

The bridge consists of a convert|50|m|ft bridge deck, consisting of three 17 by 17 m (55 by 55 ft) and decking segments, covered with . The deck is supported by twenty-two 51 mm diameter spiral s originating from both sides of a convert|25|m|ft high arch. The arch is made of six prefabricated trapezoid steel box sections, and spans the bridge diagonally. The bridge is illuminated at night.

The three sections of decking were assembled on the broad of Princess Road, and were craned into position over a weekend when Princess Road was closed. The decking was temporarily supported by s until the arch was ready. The six sections of the arch were welded together on site into two halves before being lifted into position during a second weekend. The cables were connected on third weekend. The bridge was formally opened on by in a ceremony including the and . The ceremony was concluded by them being driven over the bridge in a , and was followed by a .

The bridge has been described by the structural engineers as "a perfect example of how imaginative design combined with leading-edge engineering technology can be used to create a landmark structure which captures the public's imagination."