"Dress You Up" is a song by American singer Madonna. It was released as the final single from her second studio album, Like a Virgin, on July 24, 1985, by Sire Records. The song was the last track to be added to the album as it was submitted late by songwriters Andrea LaRusso and Peggy Stanziale. Madonna pushed for the song's inclusion on Like a Virgin as she particularly liked its lyrics. Musically, the song is a drum beat driven dance track featuring instrumentation from guitars and vocals from a choir. The lyrics are an extended metaphor for fashion and sex, comparing dressing up with passion. A live performance from Madonna's first tour was used as the music video.

Critics reacted positively to the dance-pop nature of the track. "Dress You Up" became Madonna's sixth consecutive top-five single in the United States. It also reached the top-ten in Australia, Belgium, Canada, Ireland, New Zealand and the United Kingdom. The song was most recently performed on the 2009 leg of the Sticky & Sweet Tour. "Dress You Up" was added to the "Filthy Fifteen" list of the Parents Music Resource Center, due to the perceived sexual nature of its lyrics. The song has been covered in different forms by a number of artists.

"Dress You Up" was the last song to be included on the Like a Virgin album. Producer Nile Rodgers had initially asked songwriters Andrea LaRusso and Peggy Stanziale to write a chic-styled song for Madonna.[1] However, the writing took time, since both LaRusso and Stanziale were busy with other projects.[2] When the lyrics of the song was submitted, Rodgers rejected it as there was no time to compose a melody and record it for the album. But Madonna liked the lyrics of the song, and persuaded Rodgers to include it on Like a Virgin.[2] In Britain, the song was released as a limited-edition shaped picture disc. In this case, it was star-shaped to tie in with the Christmas release date for the single.[3] The song is one of several of Madonna's hit singles not included on The Immaculate Collection compilation, released in 1990.[4] "Dress You Up" was, however, later included on Madonna's 2009 compilation album Celebration.[5] Although no music video was separately made for the song, a live performance of "Dress You Up" from The Virgin Tour, filmed at Detroit was used as the video.[6]

"Dress You Up" is a characteristic drum machine driven dance track and consists of a two-chord verse. The chorus is supported by vocals from a choir, a four-chord progression and a single guitar note, played by Rodgers.[7] A rock guitar solo plays during the bridge. Towards the end of the song, the sound of the drums are decreased, while the treble is increased.[7] According to the sheet music published at Musicnotes.com by Alfred Publishing, the song is set in the time signature of common time, with a moderate tempo of 100 beats per minute. It is composed in the key of A minor, with Madonna's vocals ranging from a low-note of B♭3 to a high-note of F♯5. The song has a basic sequence of Bb–C–Gm7–Bb–A in the verses and Bb–C–Am7–Dm in the chorus, as its chord progression.[8]

The lyrics of the song are a metaphor for fashion and sex. Madonna sings about clothes she would like to drape over her man, so that she can caress his body with her hands.[7] According to Rikky Rooksby, author of Madonna: The Complete Guide To Her Music, the line "I'll create a look that's made for you", later became synonymous with Madonna's re-invention of her image throughout her career.[9]

Nancy Erlick from Billboard said that the song felt like "[Madonna] The pin-up girl in character; part saucy, eager to please."[10] Alex Henderson from Allmusic, commented that "Rodger's [producer] gift for sleek, seductive dance music [Chic's specialty] is evident on such gems as 'Dress You Up'."[11] Stephen Thomas Erlewine from Allmusic, called "Dress You Up" an excellent, standard-issue dance-pop.[12] Santiago Fouz-Hernández and Freya Jarman-Ivens, authors of Madonna's Drowned Worlds: New Approaches To Her Cultural Transformations, commented that Madonna sounded like a "sex-kitten" in the song.[13] Sla Cinquemani from Slant Magazine called the song irresistible.[14] William McKeen, author of Rock and roll is here to stay, said that the melody of "Dress You Up" was insistently chugging.[15] Debby Miller from Rolling Stone said that "Despite her little-girl voice, there's an undercurrent of ambition that makes her more than the latest Betty Boop."[16] While reviewing the album in 1995, Dave Karger from Entertainment Weekly commented that the song came off as a bit repetitious and immature.[17] Jim Farber from the same publication commented that "the song was built to transcend the Dynasty era."[18]

While reviewing The Immaculate Collection, Alfred Soto from Stylus Magazine commented: "Like A Virgin's Top Five absentees 'Dress You Up' and 'Angel' do a better job than the two big singles of delineating the boundaries of Madonna's determined shallowness, an act that confounds Philistines today and made the appreciation of her musical skills a lot harder than it took these critics to dismiss Cyndi Lauper as the real charlatan."[19] In 2003, when fans were asked to vote for the top twenty Madonna singles of all time, by Q magazine, "Dress You Up" was allocated the eighth spot.[20] The video was nominated at the 1986 MTV Video Music Awards, in the category for Best Choreography, but lost to "Raspberry Beret" by Prince and The Revolution.[21]

"Dress You Up" debuted at thirty-six on the Billboard Hot 100 on August 17, 1985.[22] After seven weeks, the song reached number five on the Hot 100, becoming Madonna's sixth consecutive top-five hit.[23][24] It also peaked at number thirty-four on the Hot Adult Contemporary Tracks chart, number three on Hot Dance Music/Club Play and sixty-four on the Hot R&B/Hip-Hop Songs chart.[24] It placed at 94 on the year-end chart for 1985, with Madonna becoming the top pop artist for the year.[25] In Canada, the song debuted at ninety on the RPM singles chart on August 24, 1985.[26] The song was present for a total of twenty weeks on the chart, peaking at number ten after six weeks.[27][28]

In the United Kingdom, "Dress You Up" was released on November 12, 1985. It entered the UK Singles Chart at twelve, and reached a peak of five, being present on the chart for a total of thirteen weeks.[29] The song was certified silver by the British Phonographic Industry (BPI), for shipments of 200,000 copies.[30] According to The Official Charts Company, the song has sold 210,000 copies there.[31] In Australia, the song peaked at five in October 1985, becoming Madonna's sixth top-ten single there.[32] The song also reached the top-twenty in Belgium, France, Ireland, Netherlands, New Zealand, Spain, Switzerland and the Eurochart Hot 100 Singles, while peaking just outside the top-twenty in Germany and Italy.[33][34][35][36][37][38][39] 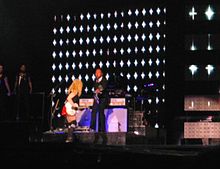 Madonna performing "Dress You Up" on the Sticky & Sweet Tour (2009)

Madonna has performed "Dress You Up" on three of her world tours, namely The Virgin Tour in 1985, the Who's That Girl World Tour in 1987, and the 2009 leg of the Sticky & Sweet Tour. On The Virgin Tour, "Dress You Up" was the opening song of the set. Madonna wore a blue see-through crop-top, revealing her characteristic black bra. She also had lacy leggings and crucifixes around her ear and her neck. As the beat of the song started, Madonna entered the stage and posed on the stairs before reaching the microphone to sing the track.[40] A performance of the song from the Virgin Tour was included on the VHS release Live – The Virgin Tour.[41] During the Who's That Girl World Tour of 1987, Madonna performed it as a medley with "Material Girl" and "Like a Virgin". She wore an elaborate costume, inspired by Dame Edna Everage. It consisted of a hat strewn with fake fruits, flowers and feathers, jeweled batwing spectacles with heavy, black frames, a ruffled skirt and a bodice covered with objects such as watches and dolls and fishnets. Author Carol Clrek stated that the dress was more "ludicrous for Madonna, than humorous."[42] Two different performances of the song on this tour can be found on the videos: Who's That Girl – Live in Japan, filmed in Tokyo, Japan, on June 22, 1987,[43] and Ciao, Italia! – Live from Italy, filmed in Turin, Italy, on September 4, 1987.[44]

A backing track was created to accompany the performance of "Dress You Up" on her 2004 Re-Invention World Tour, however Madonna found it difficult to learn the guitar chords for the song, choosing to perform "Material Girl" instead.[45] In 2008, Madonna performed the first verse and chorus of the song during the request section of the Sticky & Sweet Tour. The song was performed at Chicago, Los Angeles, Philadelphia, Rio de Janeiro, Toronto, Valencia and Vienna.[46] Madonna finally added "Dress You Up" to the 2009 leg of the Sticky & Sweet Tour, replacing the rock version of "Borderline". It was performed as part of the 'old school' segment and featured the groove from The Knack's song My Sharona.[47][48]

In 1999 "Dress You Up" was sung by a group of artists, including Alex Greenwald, Rashida Jones and Jason Thompson, for Gap's "Everybody in Vests" TV commercial directed by Pedro Romhanyi. Music for the song was created by the Dust Brothers.[49] An alternative rock cover of the song by shoegazer band Apollo Heights was included on the 2007 Madonna tribute compilation Through the Wilderness.[50] The power pop band Zolof the Rock & Roll Destroyer, along with third wave ska band Reel Big Fish, covered the song on their 2007 EP Duet All Night Long.[51] United Kingdom dance artist Kelly Llorenna recorded a new version of the song in 2008. The cover was released as a single in 2009 and a music video aired on Clubland TV, featuring Llorenna trying on a selection of different outfits in a clothes shop named Kelly Llorenna. At the end of the video Llorenna drives off in a limousine wearing a chauffeur's outfit.[52]

In 1985, the song was the subject of much media attention, when it was included on the Parents Music Resource Center's (PMRC) "Filthy Fifteen" list, for the perceived sexual content of its lyrics. The Center's founder Tipper Gore had heard her daughter listening to the song, and considered the line "Gonna dress you up in my love" as exemplifying 'vulgar music'. The PMRC called upon the Recording Industry Association of America (RIAA) to give parents a consumer-friendly means of identifying rock records unsuitable for minors – a rating system based on lyrical content. "Dress You Up" received a rating of 'S', for "sex and obscenity", from the RIAA.[53] Gore commented on the song: "Popular culture is morally bankrupt, flagrantly licentious and utterly materialistic—and Madonna is the worst of all." According to Bruce David Forbes and H. Mahan in their book Religion and Popular Culture in America, Madonna's fans took the attitude "Can't you cultural conservatives see what she is trying to do—to annoy people like you! If you don't like it, don't listen to it. Stop trying to police my morality!"[54] The campaign was ultimately successful and led to the creation of the Parental Advisory sticker.[55]

Credits adapted from the Like a Virgin album liner notes.[61]