The monarchy of Tuvalu (the Tuvaluan monarchy) is a system of government in which a hereditary monarch is the sovereign of Tuvalu. The present monarch of Tuvalu is Queen Elizabeth II. [1] Tuvalu shares the sovereign with 15 other Commonwealth realms. [2]The Queen's constitutional roles are mostly delegated to the Governor-General of Tuvalu. Royal succession is governed by the English Act of Settlement of 1701, which is part of constitutional law.

In the first years of the 21st century the issue of abolishing the monarchy was raised by local politicians, but a constitutional referendum held on 30 April 2008 turned out 1,260 to 679 votes in favour of retaining the monarchy.[3]

One of the most complicated features of the Tuvaluan monarchy is that it is a shared monarchy.

The Balfour Declaration of 1926 provided the dominions the right to be considered equal to Britain, rather than subordinate; an agreement that had the result of, in theory, a shared Crown that operates independently in each realm rather than a unitary British Crown under which all the dominions were secondary. The Monarchy thus ceased to be an exclusively British institution, although it has often been called "British" since this time (in both legal and common language) for reasons historical, legal, and of convenience. The Royal and Parliamentary Titles Act, 1927 was the first indication of this shift in law, further elaborated in the Statute of Westminster, 1931.

Tuvalu achieved independence in 1978 but retained the Queen as Head of State. Under the Statute of Westminster, Tuvalu has a common monarchy with Britain and the other Commonwealth realms, and though laws governing the line of succession to the Tuvaluan throne lie within the control of the Tuvaluan Parliament, Tuvalu cannot change the rules of succession without the unanimous consent of the other realms, unless explicitly leaving the shared monarchy relationship by means of a constitutional amendment. This situation applies symmetrically in all the other realms, including the UK.

On all matters of the Tuvaluan State, the Monarch is advised solely by Tuvaluan ministers. 16 June remains a public holiday as the Queen's Official Birthday.

The Queen of Tuvalu and the Duke of Edinburgh have only paid one visit to Tuvalu on 26-27 October 1982. The royal couple were carried around in ceremonial litters and later served with traditional local dishes on a banquet.[5] A sheet of commemorative stamps were issued for the royal visit.

Former Prime Minister Sir Kamuta Latasi was knighted by the Queen in 2008 although he is noted for his republican leanings in Tuvaluan politics.

In Tuvalu, the Queen's official title is: Elizabeth the Second, by the Grace of God, Queen of Tuvalu and of Her other Realms and Territories, Head of the Commonwealth.

This style communicates Tuvalu's status as an independent monarchy, highlighting the Monarch's role specifically as Queen of Tuvalu, as well as the shared aspect of the Crown throughout the realms. Typically, the Sovereign is styled "Queen of Tuvalu," and is addressed as such when in Tuvalu, or performing duties on behalf of Tuvalu abroad.

The Tuvaluan constitution is made up of a variety of statutes and conventions that are either British or Tuvaluan origin, which gives Tuvalu a similar parliamentary system of government as the other Commonwealth realms.

Most of the Queen's domestic duties are performed by the Governor General. The Governor-General represents the Queen on ceremonial occasions such as the opening of Parliament, the presentation of honours and military parades. Under the Constitution, he is given authority to act in some matters, for example in appointing and disciplining officers of the civil service, in proroguing Parliament. As in the other Commonwealth realms, however, the Monarch's role, and thereby the vice-regent's role, is almost entirely symbolic and cultural, acting as a symbol of the legal authority under which all governments operate, and the powers that are constitutionally hers are exercised almost wholly upon the advice of the Cabinet, made up of Ministers of the Crown. It has been said since the death of Queen Anne in 1714, the last monarch to head the British cabinet, that the monarch "reigns" but does not "rule". In exceptional circumstances, however, the Monarch or vice-regal can act against such advice based upon his or her reserve powers.

There are also a few duties which must be specifically performed by, or bills that require assent by the Queen. These include: signing the appointment papers of Governors General, the confirmation of awards of honours, and approving any change in her title. 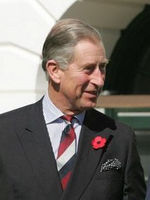 Charles, Prince of Wales, the current heir to the throne of Tuvalu

Succession to the throne is by male-preference primogeniture, and governed by the provisions of the Act of Settlement, as well as the English Bill of Rights. These documents, though originally passed by the Parliament of England, are now part of the Tuvaluan constitutional law, under control of the Tuvaluan parliament only.

This legislation lays out the rules that the Monarch cannot be a Roman Catholic, nor married to one, and must be in communion with the Church of England upon ascending the throne. As Tuvalu's laws governing succession are currently identical to those of the United Kingdom (by the Statute of Westminster) see Succession to the British Throne for more information.

The heir apparent is Elizabeth II's eldest son, Charles, who has no official title outside of the UK, but is accorded his UK title, Prince of Wales, as a courtesy title.

All laws in Tuvalu are enacted with the sovereign's, or the vice-regal's signature. The granting of a signature to a bill is known as Royal Assent; it and proclamation are required for all acts of Parliament, usually granted or withheld by the Governor General. The Vice-Regals may reserve a bill for the Monarch's pleasure, that is to say, allow the Monarch to make a personal decision on the bill. The Monarch has the power to disallow a bill (within a time limit specified by the constitution).

In the first years of the 21st century there was a debate about the abolition of the monarchy. Prime Minister Saufatu Sopoanga had stated in 2004 that he was in favour of replacing the Queen as Tuvalu's head of state, a view supported by popular former Prime Minister Ionatana Ionatana; Sopoanga also stated that public opinion would be evaluated first before taking any further moves.[6] Former Prime Minister Kamuta Latasi also supported the idea.