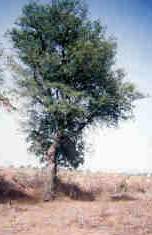 "Prosopis cineraria" is a small to medium size , found mainly in the of in . Common names include: Ghaf (), khejri, jant/janti, sangri (), jand (Punjabi), kandi (), sami, sumri (). Its trade name is kandi.

"Prosopis cineraria" tree grows in dry and arid regions of Arabia and in regions of mainly , , Punjab, , Western and drier parts of and extends as far as South in . In this region also it is confined only to comparatively drier areas where the normal annual rainfall is less than 500 mm. In the most important areas of "Prosopis cineraria" distribution, the climate is dry to arid and rainfall shows considerable variation 100 to 600 mm annually with a long dry season.In areas of its natural distribution, the climate is characterised by extremes of temperature. Summers are very hot and winters are severe with frost during December-January. The maximum shade temperature varies from about 40 to 46 °C, the absolute minimum temperature from 9 to 16 °C.

It is a tree of the plains or gently undulating ground and ravine country and seldom extends into the hills. This tree has succeeded in withstanding the odds by acquiring considerable drought hardiness.

The tree grows on a variety of soils. It is seen at its best on alluvial soils consisting of various mixtures of sand and clay. It is common on moderately saline soils, it quickly dries out where the soil is very saline.

The rural communities encourage the growth of Khejri in their agricultural fields, pastures and village community lands. Through experience, farmers have realized its usefulness and learnt that it does not adversely affect crop yields; instead, it improves grain yield and storage biomass production.

"Prosopis cineraria" tree occurs in the dry and arid regions of India. It is one of the chief indigenous trees of the plains of the Punjab, Western Rajasthan and Gujarat and is common in and the neighborhoods of and .

It is also found in the dry parts of Central and Southern India, occurring in parts of (near ), , and south of . It also extends to West , and .

Density of Khejri increases from the Western to Eastern part of the Western Rajasthan. Older and younger plains are the two habitats preferred by Khejri but it also grows well in sandy undulating plains. Because of its capacity to avail perched water and to absorb moisture from rains through its foliage, it can grow in the extremely arid tracts (100 mm rainfall).

"Prosopis cineraria" is a small moderate sized thorny tree, with slender branches armed with conical thorns and with light bluish-green foliage. The leaflets are dark green with thin casting of light shade. It coppices profusely.

The tree is or nearly so. It produces new flush leaves before summer. The flowers are small in size and yellow or creamy white in colour, appear from March to May after the new flush of leaves. The pods are formed soon thereafter and grow rapidly in size attaining full size in about two months time.

Historically "Prosopis cineraria" has played a significant role in the rural in the northwest arid region of Indian sub-continent. This tree is a and it improves soil fertility. It is an important constituent of the vegetation system. It is well adapted to the arid conditions and stands well to the adverse vagaries of climate and browsing by animals. Camels and goats readily browse it. In areas open to goat browsing, the young plants assume cauliflower shaped bushy appearance.

"Prosopis cineraria" is a strong light demander, dense shade kills the seedlings. It is drought resistant and tolerates dry and arid condition to such an extent that it is described as an aridity-loving tree. It is about the only indigenous tree species, which has withstood well the rigorous and exacting conditions of the .

The root system of "Prosopis cineraria" is long and well developed. Growth above the ground is slow but below the ground the roots penetrate deeper and deeper for the sub soil water. Very deep roots help in securing firm footing and in obtaining moisture supplies from deep soil layers. Taproot penetration up to 35 m depth has been reported. The tree is able to withstand the hottest winds and the driest season, and remains alive when other plants would succumb. The tee is frost resistant. Because of its economic value, the tree is left standing in the arable land and the farmers regulate its population by adapting suitable agroforestry management. It is a very useful tree, possessing great vitality and rapid growth in its natural zone and considerable power of reproduction from coppice shoots.

Utilization of the species

"Prosopis cineraria" provides of construction class. It is used for house-building, chiefly as rafters, posts scantlings, doors and windows, and for well construction water pipes, upright posts of Persian wheels, agricultural implements and shafts, spokes, fellows and yoke of . It can also be used for small turning work and tool-handles. Container manufacturing is another important wood-based industry, which depends heavily on desert grown trees.

"Prosopis cineraria" is much valued as a tree. The trees are heavily lopped particularly during winter months when no other green fodder is available in the dry tracts. There is a popular saying that death will not visit a man, even at the time of a famine, if he has a "Prosopis cineraria", a and a , since the three together are somewhat said to sustain a man even under the most trying condition. The forage yield per tree varies a great deal. On an average, the yield of green forage from a full grown tree is expected to be about 60 kg with complete lopping having only the central leading shoot, 30 kg when the lower two third crown is lopped and 20 kg when the lower one third crown is lopped. The leaves are of high nutritive value. Feeding of the leaves during winter when no other green fodder is generally available in rain-fed areas is thus profitable. The pods are a sweetish pulp and are also used as fodder for .

"Prosopis cineraria" is most important top feed species providing nutritious and highly palatable green as well as dry fodder, which is readily eaten by camels, cattle, sheep and goats, constituting a major feed requirement of desert livestock. Locally it is called "Loong". Pods are locally called "sangar" or "sangri". The dried pods locally called "Kho-Kha" are eaten. Dried pods also form rich animal feed, which is liked by all livestock. Green pods also form rich animal feed, which is liked by drying the young boiled pods. They are also used as famine food and known even to prehistoric man. Even the bark, having an astringent bitter taste, was reportedly eaten during the severe famine of 1899 and 1939. Pod yield is nearly 14,000 kg/km² with a variation of 10.7% in dry locations.

Use in environmental Conservation

"Prosopis cineraria" has a very deep tap root system and hence it does not generally compete with the associated crops. The improved physical soil conditions compared with higher availability of nutrients under the Khejri canopy explain the better growth of the crops associated with it.

Rural communities encourage, the growth of "Prosopis cineraria" in their fields, and village . Because of its extensive root system it stabilizes shifting sand dunes and is also useful as windbreak shelterbelt and in afforestation of dry areas. It fixes atmospheric nitrogen through microbial activities. It adds organic matter through leaf litter decomposition thus rejuvenating poor soils. Since in arid regions, this is the only tree species, it provides much needed shade and shelter to the farmers working in the fields as well as to the cattle and wildlife during the summer months.

Pods of "Prosopis cineraria" are eaten by cattle, sheep, horses, mules, donkeys, goats, camel and other in especially and in western have survived by eating pods and leaves of this tree."

Medicinal uses of the tree

"Prosopis cineraria" flower is pounded, mixed with sugar and used during pregnancy as safeguard against miscarriage. Water-soluble extract of the residue from methanal extract of the stem bark exhibits properties.

"Prosopis cineraria" plant produces gum, which is obtained during May and June. The bark of the tree is dry, acrid, bitter with a sharp taste; cooling ; tonic, cures , , , , , piles and tremors of the muscles. The smoke of the leaves is good for eye troubles. The fruit is dry and hot, with a flavour, indigestible, causes biliousness, and destroys the nails and the hair. The pod is considered astringent in Punjab. The bark is used as a remedy for , in , asthma. The plant is recommended for the treatment of snakebite. The bark is prescribed for scorpion sting.