The Cult of Dionysus is strongly associated with satyrs, centaurs, and sileni, and its characteristic symbols are the bull, the serpent, the ivy, and the wine. The Dionysia and Lenaia festivals in Athens were dedicated to Dionysus, as well as the Phallic processions. Initiates worshipped him in the Dionysian Mysteries, which were comparable to and linked with the Orphic Mysteries, and may have influenced Gnosticism. Orpheus was said to have invented the Mysteries of Dionysus.[1]

The Cult of Dionysus traces back to at least Minoan Crete, since his name is found on Mycenean Linear B tablets as "DI-WO-NI-SO-JO",[2] and Karl Kerenyi[3] Dionysus is often shown riding a leopard, wearing a leopard skin, or in a chariot drawn by panthers, and may also be recognized by the thyrsus he carries. Besides the grapevine and its wild barren alter-ego, the toxic ivy plant, both sacred to him, the fig was also his symbol. The pinecone that tipped his thyrsus linked him to Cybele. 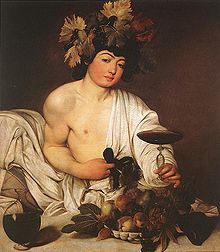 Introduced into Rome (c. 200 BC) from the Greek culture of southern Italy or by way of Greek-influenced Etruria, the bacchanalia were held in secret and attended by women only, in the grove of Simila, near the Aventine Hill, on March 16 and 17. Subsequently, admission to the rites were extended to men and celebrations took place five times a month. The notoriety of these festivals, where many kinds of crimes and political conspiracies were supposed to be planned, led in 186 BC to a decree of the Senate—the so-called Senatus consultum de Bacchanalibus, inscribed on a bronze tablet discovered in Calabria (1640), now at Vienna—by which the Bacchanalia were prohibited throughout all Italy except in certain special cases which must be approved specifically by the Senate. In spite of the severe punishment inflicted on those found in violation of this decree, the Bacchanalia were not stamped out, at any rate in the south of Italy, for a very long time.

Dionysus is equated with both Bacchus and Liber (also Liber Pater). Liber ("the free one") was a god of fertility, wine, and growth, married to Libera. His festival was the Liberalia, celebrated on March 17, but in some myths the festival was also held on March 5.

Dionysus sometimes has the epithet Acratophorus, by which he was designated as the giver of unmixed wine, and worshipped at Phigaleia in Arcadia.[4][5] In Sicyon he was worshiped by the name Acroreites.[6] As Bacchus, he carried the Latin epithet Adoneus, "Ruler".[7] Aegobolus, "goat killer", was the name under which he was worshiped at Potniae in Boeotia.[8] As Aesymnetes ("ruler" or "lord") he was worshipped at Aroë and Patrae in Achaea. Another epithet was Bromios, "the thunderer" or "he of the loud shout". As Dendrites, "he of the trees", he is a powerful fertility god. Dithyrambos is sometimes used to refer to him or to solemn songs sung to him at festivals; the name refers to his premature birth. Eleutherios ("the liberator") was an epithet for both Dionysus and Eros. Other forms of the god as that of fertility include the epithet in Samos and Lesbos Enorches ("with balls"[9] or perhaps "in the testicles" in reference to Zeus' sewing the babe Dionysus into his thigh, i.e., his testicles).[10] Even Augustine in City og God 6.9 credits Dionysus with being responsible for sexual relief, saying that he "liberates" men from semen during intercourse.Evius is an epithet of his used prominently in Euripides' play, The Bacchae. Iacchus, possibly an epithet of Dionysus, is associated with the Eleusinian Mysteries; in Eleusis, he is known as a son of Zeus and Demeter. The name "Iacchus" may come from the Ιακχος (Iakchos), a hymn sung in honor of Dionysus. With the epithet Liknites ("he of the winnowing fan") he is a fertility god connected with the mystery religions. A winnowing fan was similar to a shovel and was used to separate the chaff from the grain. In addition, Dionysus is known as Lyaeus ("he who unties") as a god of relaxation and freedom from worry, and as Oeneus he is the god of the wine press.

In the Greek pantheon, Dionysus (along with Zeus) absorbs the role of Sabazios, a Phrygian deity. In the Roman pantheon, Sabazius became an alternate name for Bacchus.[11]