Born to a bloodline of acclaimed professional footballers, which includes uncles Michael Long and Maurice Rioli, the first eight years of Rioli's life were spent in the Tiwi Islands. He moved to Darwin and began playing for the St Marys Football Club and then at age 14, moved to Melbourne to pursue a career in the AFL—boarding at and playing for Scotch College. Rioli emerged as a standout performer in the 2007 AFL national under 18 championships, earning himself selection in the U/18 All-Australian team. On the back of this success, Rioli was selected at pick number 12 in the 2007 AFL Draft by the Hawthorn Hawks.

Rioli made his AFL debut in Hawthorn's defeat of the Melbourne Football Club at the Melbourne Cricket Ground (MCG) in round one 2008. He built a reputation around his ability to chase and pressure the opposition as they attempted to rebound from the forward line. In round six, he was nominated for the AFL Rising Star Award, after his display against Richmond, in which he received a nomination for Goal of the Year. Rioli appeared in every game in his debut season, including an inspirational performance in Hawthorn's defeat of Geelong in the 2008 AFL Grand Final. He was rewarded for his impressive debut season with a sixth place finish in Hawthorn's Peter Crimmins Medal (Best and fairest award) and second overall in the AFL Rising Star Award.

Rioli's second season was not as decorated as his first, with Hawthorn missing out on the finals after suffering a "premiership hangover". He spent more time in the midfield, and was struck down with injury, missing three games. Upon the end of a disappointing season, Rioli announced that he would like to help bring more Indigenous players down to be drafted from the Northern Territory and also offered his support to an incentive aimed at teaching Indigenous people in remote areas about the damage drugs and alcohol can do to the brain.

Born to Cyril Jr. and Kathy in 1989, Rioli was introduced into a bloodline of talented footballers. His grandfather Cyril Sr. fathered Cyril Jr., who was a champion footballer in the Northern Territory and his brother, Richmond Norm Smith Medallist Maurice Rioli. Cyril Jr. played for Northern Territory Football League club St Marys, where he won 12 premiership medallions and the 1995–96 Nichols Medal as the league's best and fairest player. His mother Kathy is two-time premiership player and 1993 Norm Smith Medallist Michael Long's sister. Rioli has a sister named Kalisha and another former footballer, Dean Rioli, is his cousin.[2][3] He spent the first eight years of his life in the Tiwi Islands before moving with his family to Darwin in the Northern Territory,[4][5] playing his younger years at St Marys also.[2]

Rioli moved to Melbourne in 2004 as a 14 year old, where he attended and boarded at Scotch College for four years whilst playing for the school's football team. The move came about after a decade-long relationship between the school and Indigenous communities of the Northern Territory. Dr. Rob Smith, a teacher at Scotch College, had expanded the school's four-week exchange program for talented Indigenous footballers into a full scholarship program, following numerous tours of the Tiwi Islands and specifically, Bathurst Island. Rioli was the first selected into the program. He originally made the trip alongside his cousin Steven, after just three days in Melbourne the two re-packed their bags with the intention of returning home. In an effort to retain the boys, Smith phoned Michael Long, who came out to the school with Derek Kickett and Sibby Rioli, another uncle. Long said he knew Cyril was making a life-defining choice at just 14; "That was the big moment, whether he'd tough it out or go". Steven returned home and Cyril persisted in Melbourne.[4][6][7] Nicknamed "Junior" or "Junior Boy", he shone in his final season with Scotch College, despite suffering injuries throughout the season; including a broken collarbone and a severely damaged ankle.[2][8] He developed somewhat of a cult following whilst playing for the school, following a video clip of his highlights being uploaded to YouTube. He has since stated that he believes the early move to school in Melbourne made the transition a lot easier.[9]

Rioli was also a standout performer in the 2007 AFL national under 18 championships, becoming the only Northern Territorian to earn All-Australian honours,[10] following a seven-goal performance in a match against Queensland.[8] He was tipped to go high in the national draft, from anywhere between five and twenty-five.[8] In this final year of junior football, he was one of five players, including Trent Cotchin, to be chronicled in the book The Draft: Inside the AFL's Search for Talent, by The Age journalist Emma Quayle.[7][11]

Despite Rioli's speed, evasiveness and flashy tricks, the scouts at the AFL's draft camp were still to be convinced of his dedication, with his skin folds being described as "less than brilliant" and his commitment to AFL still being questionable.[8] Prior to the draft, Rioli said "I have had a few clubs call me, and it's just confusing. I love playing footy, and I think I am pretty good at it, but it doesn't really matter where (I go in the draft)." He reportedly spoke to both the Kangaroos and the Adelaide Crows,[8] before eventually being drafted by the Hawthorn Football Club in the 2007 AFL Draft. The Hawks used their first-round draft pick and the number 12 pick overall to claim Rioli.[1] 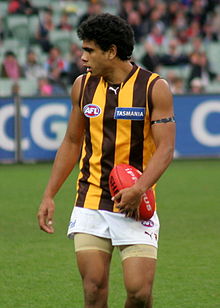 Just four days after being drafted by the Hawks, Rioli was ordered to urgently organise a passport so he could attend the club's trek of the Kokoda Track.[12] He covered 90% of his first pre-season schedule for the club; a very high volume of work for a first-year player according to the head fitness coach Andrew Russell. Russell said, "Nobody that I worked with in the last four years at Hawthorn did that much in their first pre-season."[13] After debuting against the Melbourne Demons in round one, Rioli had a standout first season in the AFL. He was nominated for the 2008 AFL Rising Star Award in round six against the Richmond Tigers, after gathering nineteen possessions and kicking two goals, one of which was a nominee for Goal of the Year.[10]

Following his early performances in the season, he was described as a speedy left-footer that played an important role in Hawthorn's forward line during their unbeaten start to the year.[10] It was well documented that Rioli had provided a "massive spark" in and around packs, with his chasing and pressuring as teams tried to rebound even becoming an inspiration to opposition teams.[14][15] After a "stunning" debut season,[16] Hawthorn decided to give Rioli a break during the finals campaign and sent him home for four days between the qualifying final and the preliminary finals. He returned physically and mentally refreshed, with an inspirational performance in the Grand Final.[4] His impact on the game was described as instrumental as Hawthorn defeated Geelong,[17] in the club's first premiership since 1991. Rioli assisted in a couple of first quarter goals and kicked two goals for himself in the final, after the game Hawthorn coach Alastair Clarkson said, "We knew Cyril was a beauty, but you just never anticipate that they're going to play every game of the season and be able to play in a grand final." With nothing but praise for Rioli, Clarkson also made mention of his achievements in 2008, "He's got a premiership medal now, but he's been in contention for mark of the year, goal of the year and the rising star and he's been very, very consistent. He's a 15-possession, five-tackle a game player with a goal or two – he's been a sensational acquisition to our club."[16]

Rioli finished second overall in the 2008 AFL Rising Star Award, from which he was nominated for in round six. The award was won by Fremantle's Rhys Palmer with 44 votes, ahead of Rioli on 37.[18] Michael Voss went as far as predicting Rioli would be only the fourth first year player to be selected in the All-Australian team,[19] but it did not eventuate. He came in sixth overall in Hawthorn's Peter Crimmins Medal (Best and fairest award)[20] and received his first two Brownlow Medal votes for his performance against the Brisbane Lions in round 19.[21]

In February 2009, Rioli was selected for the Indigenous All-Stars that played a pre-season match against the Adelaide Football Club.[22] Following his successful debut season and promising start to his second, he was compared to Gary Ablett Jr., who also began his career as a small forward with the potential to become a "dominant, match-winning midfielder". This was due to the "sublime skills" he displays, and his "ability to make something out of nothing with vision and an instinct for the game." Former footballer and journalist Garry Lyon said in an article for The Age, that when Rioli is ready to take on a greater workload in the midfield, will be determined by his physical and aerobic capacity. Rioli's greatest challenge in the coming 12 months being to incorporate the "gut" running into his game that the likes of Ablett, Chris Judd, Lenny Hayes and Brett Kirk have mastered.[20][23]

Rioli plays at the Melbourne Cricket Ground against Melbourne

In May, journalist Mike Sheahan proclaimed that Rioli's exploits on the field were being overlooked. He said whilst Hawthorn as a club was being analysed and dissected, Rioli wasn't getting the recognition he deserved. According to Champion Data, only captain Sam Mitchell had been more effective for Hawthorn at this time in the year.[23] Following 36 consecutive games after being drafted, Rioli tore his hamstring in round 11 2009 against the Sydney Swans. Missing his first regular season match in round 12, he spent a month on the sidelines before returning against North Melbourne in round 15. The Hawks were defeated in all three games he missed.[4][24] His return was described as a "big boost" for Hawthorn's last-ditch bid to revive its season, after many commentators said the club was suffering a "premiership hangover".[24] Following his return, it was announced that Rioli had re-signed with Hawthorn for a further three years.[17] Hawthorn eventually faultered in the final round of the home and away season, losing to Essendon by 17 points. Thus, failing to qualify for the finals.[25] Rioli's season was however, still seen as impressive. In the AFL website's end of year review, it was predicted that he will be considered an elite AFL player in the coming years.[26]

Approaching the end of the 2009 season, Rioli bought his first apartment and declared his allegiance to spending his whole career with Hawthorn, he also revealed his intentions to help bring more players down from the Northern Territory; "That's the real goal for me, to get more kids drafted from the Northern Territory."[4] After Hawthorn's demise in 2009, Rioli gave his support to a project which aims to teach Indigenous people in remote areas about the damage drugs and alcohol can do to the brain. An image of him is used in flip charts developed by the Menzies School of Health Research as an example of a person with a healthy brain. Sheree Cairney, the lead researcher at Menzies School, says there is a lack of knowledge in remote communities about how to treat drug and alcohol addiction, with the problem being "very, very widespread."[27] At the end of 2009, he was awarded the AFL Players Association award for Best Young Player, covering his first two years in football.[28] He also received the Phil Manassa Medal (Goal of the Year award) for his round seven effort against Essendon,[29] and came second in the Peter Crimmins Medal behind the club's captain Sam Mitchell.[30]