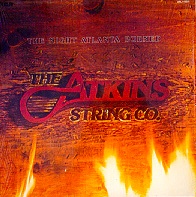 "The Night Atlanta Burned" is an album by and is credited to "The Atkins String Co." — a quartet including Chet, , Paul Yandell and Lisa Silver. The album is a fusion of classical musical techniques with country, folk and bluegrass.

The liner notes are by who discusses the burning of Atlanta and the Atlanta Conservatory of Music during the .

"The Night Atlanta Burned" was re-released on CD in 2007 packaged with "The First Nashville Guitar Quartet" on Raven Records.