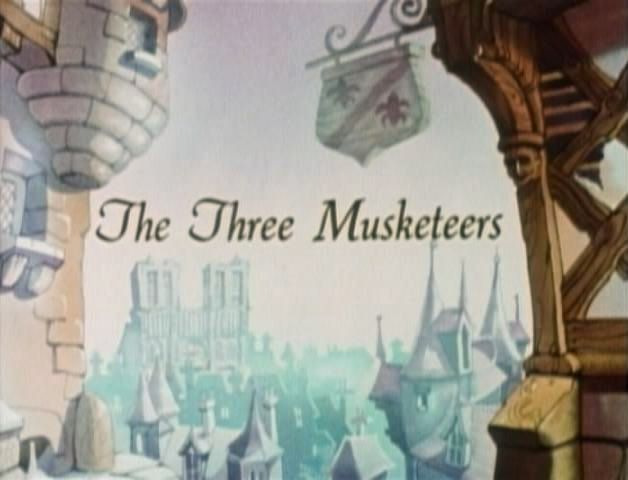 "The Three Musketeers" is an n 49-minute from . It was originally released in 1986

In during the mid , receives a visit from the despicably charming young woman, . Milady brings the Cardinal information regarding the notorious affair between the queen of France and the English . Outside their window, the queen's seamstress, Constance Bonacieux, stands watching the conversation between the two characters, when she is attacked by Rochefort, one of the Cardinal's loyal men. She is rescued by the young musketeer and taken away to his abode, where Constance briefly explains her troubles and asks for d'Artagnan's help. Cardinal Richelieu, wanting to convince King Louis XIII that his wife, the queen, is unfaithful to him and in love with the Duke of Buckingham, suggests that the he should ask his wife to wear the diamonds he had given her for an upcoming ball. The queen, shocked and dismayed, confesses to Constance that she had sent the diamonds to the Duke of Buckingham, and her confidant goes to d'Artagnan for help. With the help of his companions, three of the finest musketeers in France, Athos, and , d'Artagnan makes his way to to seek the Duke himself, so that he may recover the diamonds and restore the queen's honor. Still, when all problems seem overcome, the English Duke of Buckingham plans to invade France, remove King Louis XIII and marry the queen; on the other hand, Cardinal Richelieu and Milady want revenge on d'Artagnan and Buckingham. Milady orders Rochefort to kidnap Constance Bonacieux, and when d'Artagnan learns this he sets off to rescue her. Milady is captured by Buckingham, and orders Felton to guard her. Felton falls in love with Milady; she seduces him and asks him to murder the Duke, which he does. Though she believes herself safe at a , Constance receives a visit from her supposed benefactor, Milady de Winter, who poisons her; d'Artagnan arrives at the scene and she dies in his arms. Together with Athos, Porthos and Aramis, d'Artagnan corners Milady and she is captured and sentenced to die for her crimes; Milady is then revealed to be Athos' own wife. The villains defeated and the country's honor restored, the four companions return to their homeland mourning the lives lost but cheering for their triumphs.