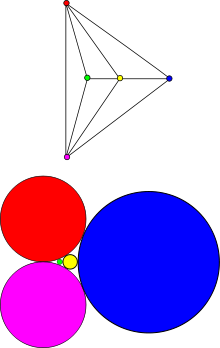 Example of the circle packing theorem on K5, the complete graph on five vertices, minus one edge.

Circle packing theorem: For every connected simple planar graph G there is a circle packing in the plane whose intersection graph is (isomorphic to) G.

A graph G is triangulated planar if it is planar and every connected component of the complement of the embedding of G in the sphere has precisely three edges on its boundary, or in other words, if G is the 1-skeleton of a simplicial complex which is homeomorphic to the sphere. Any triangulated planar graph G is connected and simple, so the circle packing theorem guarantees the existence of a circle packing whose intersection graph is (isomorphic to) G. Such a G must also be finite, so its packing will have a finite number of circles. As the following theorem states more formally, every maximal planar graph can have at most one packing.

Koebe–Andreev–Thurston theorem: If G is a finite triangulated planar graph, then the circle packing whose tangency graph is (isomorphic to) G is unique, up to Möbius transformations and reflections in lines.

Thurston[1] observes that this uniqueness is a consequence of the Mostow rigidity theorem. The plane in which the circles are packed may be viewed as the boundary of a halfspace model for hyperbolic space; with this view, each circle is the boundary of a plane within the hyperbolic space. One can define a set of disjoint planes from the circles of the packing, and a second set of disjoint planes defined by the circles surrounding each triangular gap between three of the circles in the packing. These two sets of planes meet at right angles, and form the generators of a reflection group whose fundamental domain can be viewed as a hyperbolic manifold. By Mostow rigidity, the hyperbolic structure of this domain is uniquely determined, up to isometry of the hyperbolic space; these isometries, when viewed in terms of their actions on the Euclidean plane on the boundary of the half-plane model, translate to Möbius transformations.

Generalizations of the circle packing theorem

Another generalization of the circle packing theorem involves replacing the condition of tangency with a specified intersection angle between circles corresponding to neighboring vertices. A particularly elegant version is as follows. Suppose that G is a finite 3-connected planar graph (that is, a polyhedral graph), then there is a pair of circle packings, one whose intersection graph is isomorphic to G, another whose intersection graph is isomorphic to the planar dual of G, and for every vertex in G and face adjacent to it, the circle in the first packing corresponding to the vertex intersects orthogonally with the circle in the second packing corresponding to the face.[2]

Yet another variety of generalizations allow shapes that are not circles. Suppose that G = (V, E) is a finite planar graph, and to each vertex v of G corresponds a shape

, which is homeomorphic to the closed unit disk and whose boundary is smooth. Then there is a packing

in the plane such that

the set K'v is obtained from Kv by translating and scaling. (Note that in the original circle packing theorem, there are three real parameters per vertex, two of which describe the center of the corresponding circle and one of which describe the radius, and there is one equation per edge. This also holds in this generalization.) One proof of this generalization can be obtained by applying Koebe's original proof[3] and the theorem of Brandt[4] and Harrington[5] stating that any finitely connected domain is conformally equivalent to a planar domain whose boundary components have specified shapes, up to translations and scaling.

Circle packings can be used to approximate conformal mappings between specified domains. Each circle on the left corresponds to a circle on the right.

Applications of the circle packing theorem

The circle packing theorem is a useful tool to study various problems in planar geometry, conformal mappings and planar graphs. An elegant proof of the planar separator theorem, originally due to Lipton and Tarjan,[6] has been obtained in this way.[7] Another application of the circle packing theorem is that unbiased limits of bounded-degree planar graphs are almost surely recurrent.[8] Other applications include implications for the cover time.[9] and estimates for the largest eigenvalue of bounded-genus graphs.[10]

Circle packing has also become an essential tool in origami design, as each appendage on an origami figure requires a circle of paper.[11] Robert J. Lang has used the mathematics of circle packing to develop computer programs that aid in the design of complex origami figures.

Proofs of the theorem

There are many known proofs of the circle packing theorem. Paul Koebe's original proof is based on his conformal uniformization theorem saying that a finitely connected planar domain is conformally equivalent to a circle domain. There are several different topological proofs that are known. Thurston's proof is based on Brouwer's fixed point theorem. There is also a proof using a discrete variant of Perron's method of constructing solutions to the Dirichlet problem. Yves Colin de Verdière proved[12] the existence of the circle packing as a minimizer of a convex function on a certain configuration space.

Fáry's theorem, that every graph that can be drawn without crossings in the plane using curved edges can also be drawn without crossings using straight line segment edges, follows as a simple corollary of the circle packing theorem: by placing vertices at the centers of the circles and drawing straight edges between them, a straight-line planar embedding is obtained. 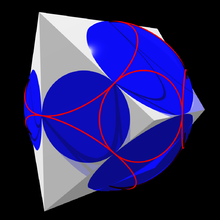 A polyhedron and its midsphere. The circle packing theorem implies that every polyhedral graph can be represented as the graph of a polyhedron that has a midsphere.

A variation of the circle packing theorem asserts that any polyhedral graph and its dual graph can be represented by two circle packings, such that the two tangent circles representing a primal graph edge and the two tangent circles representing the dual of the same edge always have their tangencies at right angles to each other at the same point of the plane. A packing of this type can be used to construct a convex polyhedron that represents the given graph and that has a midsphere, a sphere tangent to all of the edges of the polyhedron. Conversely, if a polyhedron has a midsphere, then the circles formed by the intersections of the sphere with the polyhedron faces and the circles formed by the horizons on the sphere as viewed from each polyhedron vertex form a dual packing of this type.

Collins & Stephenson (2003) describe a numerical relaxation algorithm for finding circle packings, based on ideas of William Thurston. The version of the circle packing problem that they solve takes as input a planar graph, in which all the internal faces are triangles and for which the external vertices have been labeled by positive numbers. It produces as output a circle packing whose tangencies represent the given graph, and for which the circles representing the external vertices have the radii specified in the input. As they suggest, the key to the problem is to first calculate the radii of the circles in the packing; once the radii are known, the geometric positions of the circles are not difficult to calculate. They begin with a set of tentative radii that do not correspond to a valid packing, and then repeatedly perform the following steps:

Each of these steps may be performed with simple trigonometric calculations, and as Collins and Stephenson argue, the system of radii converges rapidly to a unique fixed point for which all covering angles are exactly 2π. Once the system has converged, the circles may be placed one at a time, at each step using the positions and radii of two neighboring circles to determine the center of each successive circle.

Mohar (1993) describes a similar iterative technique for finding simultaneous packings of a polyhedral graph and its dual, in which the dual circles are at right angles to the primal circles. He proves that the method takes time polynomial in the number of circles and in log 1/ε, where ε is a bound on the distance of the centers and radii of the computed packing from those in an optimal packing.