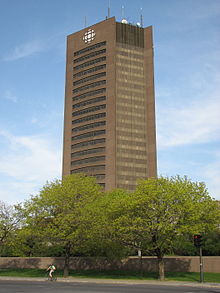 Maison Radio-Canada (sometimes Maison de Radio-Canada) is a skyscraper in Montreal, constructed in 1973 as a home for the Canadian Broadcasting Corporation's operations in Montreal.

Maison Radio-Canada (English: Canada Broadcasting House) is the broadcast headquarters for Radio-Canada, the French-language arm of the CBC. It also serves as the master control point for Radio-Canada's radio and television networks, including Première Chaîne, Espace musique, Télévision de Radio-Canada and Réseau de l'Information (RDI). It is also the main studio for television stations CBMT and CBFT and radio stations CBME-FM, CBM-FM, CBF-FM and CBFX-FM.

Maison Radio-Canada is once again the home of Radio Canada International, which had been in a building down the street. The street address of Maison Radio-Canada is 1400 René Lévesque Boulevard East, fittingly named for former premier René Lévesque, who was once a reporter and commentator for the CBC. The building is situated just a couple of blocks away from the studios of CTV Montreal (CFCF-TV), RDS, RIS, MétéoMédia, LCN, and CFTM-TV (TVA Montreal) situated at the intersection of Papineau Avenue.

The analogous facility for CBC's English language networks is the Canadian Broadcasting Centre in Toronto. CBC's corporate headquarters are in Ottawa in the CBC Ottawa Broadcast Centre.

As of November 2008, consultations are underway to redevelop the area around Maison Radio-Canada facilities.[1]

The new plans for the site include 2000 housing units, offices, commercial space, and public spaces. Furthermore, the new development would re-link the street grid through the site, following the razing of a working class Sainte-Marie, Montreal neighborhood popularly known as Faubourg à m'lasse in the 1960s to make way for the Radio-Canada complex. [2]