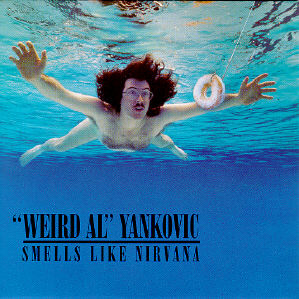 The promo single only lists "Smells Like Nirvana," but contains both songs.

Other parts point to the unintelligibility of Cobain's lyrics and vocal delivery:

:"It's unintelligible":"I just can't get it through my skull":"It's hard to bargle nawdle zouss"* :"With all these marbles in my mouth"

* Note: The phrase "bargle nawdle zouss" is actually "bark all the vowels," but the lyrics were changed for the video and have been referred to as such ever since.

The song also contains a reference to another artist ("...we don't sound like Madonna, here we are now, we're Nirvana!"), a reference to the band's hometown ("...a garage band from Seattle..."), and a reference to "", the album which includes the original, as well as to the fact that the Nirvana album does not include a complete set of lyrics in the liner notes, but rather just bits and pieces of lyrics Cobain organized into a poem ("The lyric sheet's so hard to find. What are the words? Oh, nevermind.").

The music is almost the same as "Smells Like Teen Spirit", although the is replaced by Yankovic's gargling, the entire audience humming through s, and a . The arrangement of "Smells Like Nirvana" is based on the of the original. When Yankovic parodied the song in 1992, most radio stations only played the shortened version. However, most radio stations began playing the full version. Hence the shortened intro, the bridge (the hello/how low part) and the solo. Because "Smells Like Nirvana" is a parodied version of the radio edit, many people who never heard the radio edit on the radio feel that it is unnaturally shorter than the original.

The , directed by Yankovic's manager Jay Levey, is very similar to the original video for "Smells Like Teen Spirit", even using many of the same actors and camera angles. However, various elements have been parodied:

*The craze of the . One character is even set on .
*Yankovic and his band are all wearing long-haired wigs to imitate the hairstyles of Nirvana.
*When Yankovic is doing the "bargle nawdle zouss" verse, marbles fall out of his mouth (appropriate with the sequence of the verse, "with all these marbles in my mouth"). Also, this verse is subtitled, and three s appear after "bargle nawdle zouss"
*Near the end, Yankovic cuts off a bit of his wig.
*At 1:05 in the video, a blond haired person in the front row of the bleachers rips off the head of a person seated behind him.
*Instead of "CHAKA", the drummer's bass drum has "DRUM" written in white-out. His shirt reads "Drummer" rather than "Scream."
*The cheerleaders are different in this video. One is a , another has not shaved her armpits, and one other has 's face tattooed on her arm. At one point, they do the .
*Between 2:28 and 2:39, Yankovic doesn't touch the guitars fretboard, yet he continues strumming.
*The janitor, Rudy Larosa [St. Thomas, Kurt. "Nirvana: The Chosen Rejects". , 2004. ISBN 0-312-20663-1, p. 104] , is the same actor as in "Smells Like Teen Spirit." He is seen eating a donut found in his mop bucket, playing the tuba, and dancing in a ballet outfit. He is also seen in playing the cello.
*When the janitor starts playing the tuba, the instrument he is playing sounds nothing like a tuba, and has a sound more similar to that of a . Also, he is not actually playing the tuba (he isn't pressing the valves).
*A skinheaded teen in the audience has "THIS SPACE FOR RENT" written on the back of his head.
*Several children in the high school crowd lose body parts as they are to the song (arms, legs, and even a head). Numerous members of the crowd are flung from the bleachers in the video, most prominently when Yankovic is doing the "Bargle Nawdle Zouss" verse, where a student is tossed from the tops of the bleachers to the floor.
*The yellow light illuminating Yankovic's face from below is seen to be held by a .
* is in the crowd. He offers a bite of his sandwich to the teenager next to him, but the teenager slaps it out of his hand. Ironically, the teenager is wearing a shirt with the words "EAT FOOD" written on it.
*A cow and a sheep are in the audience.
*Girl Scouts come up to the teenagers, but the teenagers knock the cookies out of their hands. During this part, a teen can be seen in the background dancing with a pair of . In another scene, one of the Scouts is seen being carried in the background by several teens.
*Nirvana's cheerleaders wear tops with a red circled letter A (a symbol of ). Yankovic's cheerleaders have the same symbol, but with a capital "L" added to the upper right of the "A," thus spelling out "AL."
*Yankovic is seen stretching on someone's nose with a pair of channel lock near the end of the video.
*Both videos are shot in the same court. In Yankovic's, there is a game going on in the background, where one of the players is hit in the face by the basketball. At one point Yankovic is thrown a basketball which he throws behind him. It disappears for about 4 seconds before falling through the hoop, from 2:41 to 2:45. Additionally, the basketball players, while playing, run into the bassist and knock him off camera at 2:36-2:37.
*Near the end, Yankovic smashes up his guitar, also hits someone on the head with a dinner plate and demolishes a building.
*During the guitar solos in "Smells Like Teen Spirit," there is a guitar riff and Cobain saying "Yay" four times. In "Smells Like Nirvana", this is replaced by four different sounds. In order, they are a burp, a "boing" sound effect, a cow's moo, and a sheep's bleat.
*At the end of the song, Yankovic starts screaming. With his voice somewhat distorted from lack of breathing, he starts coughing when he is done, then he collapses.
*Where the guitar solo was in the original version, "Weird Al" gargles some water to the tune of the solo and swallows. When playing this song in concert Al will usually gargle the water, then swallow, then throw the water left in the cup into the audience.
*Between 3:31-3:32 the drummer falls off his chair after hitting the final cymbal crash.
*, the band's guitarist, is visible in front of the crowd at 1:52. He is eating a banana, but later sees the camera in front of him, and runs away startled at 1:55. Mismatched lighting suggests this was a bluescreen shot.
*Both videos have a teenager seen stealing the drummer's Hi-Hat.
*At the "boing" sound effect, Yankovic bends his guitar, which at that point, is apparently made of rubber.
*At 0:51, there is a shot across the s like in the original video, but the bald teenager is the only teenager not head-banging. Which in contrast to the original video, when a kid with hair is the only one head-banging in the beginning.
*Due to the lighting, it appears that Yankovic shaved his mustache for this video, but this is not the case. His mustache is blond and is clearly visible at 1:29 and 3:13 (up to the end) for instance.
*At the end of the video, the drummer can be seen falling off his stool from exhaustion. Also, Al starts coughing from screaming loudly into the microphone.
*At the very beginning of the "You Don't Love Me Anymore" video, the drummer gets up from the same drumset as the "Smells Like Nirvana" video, takes off of his wig and throws his drumsticks on the ground. This a hint that they are on the same set, seconds between the music videos.

Cobain's thoughts on the video/song

In an interview performed by in early 1994, Cobain had the following to say:

:COBAIN: Oh, I laughed my butt off. I thought it was one of the funniest things I ever saw. He has some good people working for him. Those people really know how to... I mean, I'm sure he has a lot to do with it, but they really know how to reproduce things to the T. He had the exact same setup. It's the same video with him in it. It's great.

:MTV: Do you go along with the idea that imitation is the sincerest form of flattery?