Morland was a brewery in Abingdon in the English county of Oxfordshire (formerly Berkshire). They first brewed in West Ilsley in 1711. It was purchased and closed by Greene King in 2000; and production of the Morland beers was moved to their brewery in Bury St. Edmunds in Suffolk.

West Ilsley in Berkshire was the original home of the Morland Brewery. A farmer, John Morland, set up a brewery in 1711, and the local ale and porter was sought after in London's public houses. During the 1860s, Morland acquired the Child family's Abbey Brewery in Abingdon and then the Eagle Brewery in the same town. The West Ilsley operation relocated to Abingdon in the 1880s. A malthouse attached to the brewery was demolished to provide the site for the new brewery.

Morland became a limited company, registered in 1885 as United-Breweries and the company's trademark became a pyramid of three beer barrels. In 1889, Morlands took over O. B. Saxby & Co of Stert Street, Abingdon and Field & Sons Brewery in Shillingford. On the end of each of Morland's barrel was the initial of the old breweries with whom they had amalgamated. All the breweries that Morlands closed still had their own name and trademark added to their own beer labels, even though all the beer was brewed in the Abingdon Brewery.

Soon afterwards, Thomas Skurray was invited to join the Morlands business. He had studied brewing on the continent and his knowledge, coupled with an astute business brain, enabled the company to achieve considerable growth over the next fifty years. He could well be described as one of the early entrepreneurs of the brewing industry, and he was to serve a term as Chairman of the 'Brewers' Society'. Not only was he instrumental in building a new maltings in 1908, a soft drinks factory in 1910 and a replacement brewhouse in 1912, but he had already developed a malt extract plant in the old Abbey Brewery.

Morland's growth continued with the acquisition of:

In 1944 Morland became a public limited company and all the previous brewery names were dropped. Morland was now known as Morland and Co plc, with the exception of Ferguson's. In 1994, the distribution depot in Ock Street moved in to a new large warehouse in Abingdon which was formerly owned and operated by Bass-Charrington Brewery, which cost £1.5 million. Greene King brewery, acquired Morland in 2000.

A lot of the brewery buildings are still standing. The old joiners shop & paint store, malthouse cottages, and the big Malthouse which became Morlands offices and stores. Also area office & store of Bell Amusements Ltd, a fruit machine company Morlands took over from Northampton. In the middle of the old Malthouse cottages was an old stable which Mr A. J. Steel would use as his studio in which he painted new inn & pub signs.

Ock-lea which was the Brewers House and home of the Morland family in 1861 when they took over the Eagle Brewery from a bankrupt William Belcher. The Auction was held opposite the brewery in the old Cock & Tree pub. Jim Dymore-Brown, Head Brewer, lived in a very large wooden house behind the old brewery which had to be demolished when Morlands built a large air-conditioned draught beer warehouse.

In 1991, Morland and Co plc purchased 101 public houses from Courage Ltd and a further 100 were added two years later from Whitbread. More purchases were made in the mid 1990s, and also a number of restaurants nationwide. Morland opened their own restaurants called Artist Fayer. All these extra pubs placed enormous strain on all sections of the business particularly distribution, which was now required to deliver to a very much enlarged area. 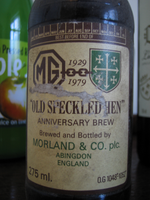 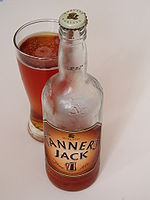 Tanners Jack ale, named after the leather tankards popular in the 18th Century

Old Speckled Hen was first brewed by Morlands of Abingdon in 1979. MG cars celebrated the 50th anniversary of their move to Abingdon, from Edmund Road in Cowley. They asked Morland to brew a special commemorative beer for the occasion, for which they would suggest the name and they would design the bottle label. The name chosen was Old Speckled Hen which took its name from a car which was brought to Abingdon, when the factory moved.

The car was called the MG Featherweight Fabric Saloon made from cellulosed fabric stretched over a wooden frame and was black speckled with gold. It became the factory's demonstration model and general runabout and as it chugged about the factory people would say "There guz the Owd Speckl'd un".

The original beer label bore the MG colours of cream and brown. The bottle dressing was finished with a green foil capsule, which matched the background colour of the Borough of Abingdon Arms. The beer was an amber colour and was brewed at a gravity of 1050 to denote 50 years (i.e. 1929 - 1979) of production of MG cars in Abingdon.