Isaac Davis (c. 1758–1810) was a Welsh advisor to Kamehameha I and helped form the Kingdom of Hawaii. He arrived in Hawaii in 1790 as the sole survivor of the massacre of the crew of The Fair American. He along with John Young became friends and advisors to Kamehameha. He brought western military knowledge to Hawaii and played a big role during Hawaii's first contacts with the European powers. He spent the rest of his life in Hawaiʻi and was known to the Hawaiian as ʻAikake.

Isaac Davis was born about 1758 in Milford Haven, Pembrokeshire, Wales.[1] He was a seaman on the American schooner Fair American, engaged with a larger companion ship, the Eleanora, in the maritime fur trade between the Pacific Northwest and China.

In 1790, the Eleanora was under the Captain Simon Metcalfe, when one of his skiffs was stolen by the chief Kaʻōpūiki at Honuaula on Maui. He punished the Hawaiians severely, killing more than 100 Hawaiians at Olowalu.

Metcalfe also once mistreated Kameʻeiamoku, a high chief on the island of Hawaii, and one of the sacred pio twins, by whipping him. The humiliated Kameʻeiamoku swore vengeance on the next ship to arrive. He attacked The Fair American at Kaʻūpūlehu, which was under the command of Metcalfe’s 18-year-old son, Thomas. Thomas and all of the Fair American’s crew were killed, except for Isaac Davis, the sole survivor of the attack, who was tied to a canoe and left nearly dead. It is said that Davis's life was spared because of his brave fighting.

In March 1790, Simon Metcalfe left his boatswain, John Young, ashore and sailed away from the Hawaiian Islands without knowing that his son had been killed. The Fair American was taken over by Kamehameha. Davis was nursed back to health by an American beachcomber named Isaac Ridler. Like his friend Young, Davis assisted Kamehameha in his dealings with foreigners and in wars of conquest.[2]

Davis was given the Hawaiian name ʻAikake and was given the status of a high chief, marrying a relative of King Kamehameha I. He was appointed Governor of Oʻahu, and owned estates on Oʻahu, Maui, Molokaʻi, and the Big Island 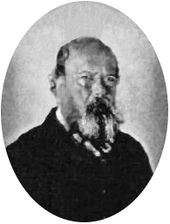 Davis first married Nakai Nalimaʻaluʻalu,[3] a chiefess with whom he had one daughter in 1797, Sarah (Sally or Kale) Kaniʻaulono Davis, named after his sister Sarah in Wales. Kale Davis lived in Honokaula, Maui, had six children, and died in 1867.

After Nakai died in the ukuʻu plague, Davis married Kalukuna,[4] a relative of Kamehameha, in Honolulu, and founded a prominent family in the islands. They had two children. His son George Hueu Davis was born on January 10, 1800. His daughter Elizabeth "Betty" Peke Davis was born on February 12, 1803. His son married Kahaanapilo Papa and had three sons; among them was Isaac Young Davis who was the second husband of Princess Ruth Keʻelikōlani. His daughter Betty married George Prince Kaumualiʻi (also known as Humehume), the son of King Kaumualiʻi of Kauaʻi.[1]

After his death, his companion John Young looked after his children. Two of them were living with him in 1807, and after Davis's murder in 1810 Young continued to care for them. In Young's will, dated 1834, he divided his lands equally between both his own and Davis's children.[5] 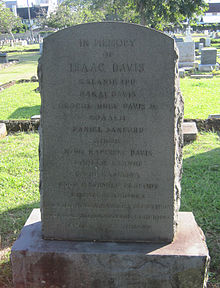 Memorial to Isaac Davis and his descendants, Oahu Cemetery

When Kaumualiʻi agreed to cede Kauaʻi to Kamehameha and become a vassal ruler, the chiefs became angry. A secret plan was made to kill the Kauaian king, while he was on Oahu. Isaac Davis, learning of the plot, warned Kaumualiʻi. Not waiting to attend the feast which was planned in his honor, he slipped away and sailed for Kauaʻi. The poison which was probably intended for Kaumualiʻi was given to Isaac Davis. Davis suddenly died in April 1810. He was buried in Honolulu, in the "The Cemetery for Foreigners". On his tombstone was placed the inscription:

However, the exact location of this cemetery is unknown.[6]

Isaac Davis had been one of Kamehameha's closest friends advisor. His death was a great shock to Kamehameha and cast a dark shadow over the satisfaction which the King must have felt with the peaceful settlement with the king of Kauaʻi.