Anglican Church of Southern Africa
Not to be confused with Church of England in South Africa.

The Anglican Church of Southern Africa, known until 2006 as the Church of the Province of Southern Africa, is the Anglican province in the southern part of Africa, including dioceses in Angola, Lesotho, Mozambique, Namibia, Saint Helena, South Africa and Swaziland. In South Africa, there are at least 2.4 million Anglicans out of an estimated population of 45 million.

The primate is the Archbishop of Cape Town. The current archbishop is Thabo Makgoba who succeeded Njongonkulu Ndungane. During the years 1986 to 1996 the primate was Nobel Peace Prize laureate Desmond Tutu.

The first Anglican clergy to minister regularly at the Cape were military chaplains who accompanied the troops when the British occupied the Cape Colony in 1795 and then again in 1806. The second British occupation resulted in a growing influx of civil servants and settlers who were members of the Church of England, and so civil or colonial chaplains were appointed to minister to their needs. These were under the authority of the governor.

The first missionary of the Society for the Propagation of the Gospel arrived in 1821. He was the Revd William Wright. He opened a church and school in Wynberg, a fashionable suburb of Cape Town. Allen Gardiner, a missionary of the Church Missionary Society went to Zululand, and arranged for a priest, Francis Owen to be sent to the royal residence of King Dingane. Owen witnessed the massacre of Piet Retief, the Voortrekker leader, and his companions, who had come to negotiate a land treaty with Dingane, and left soon afterwards.

The Anglican Church in Southern Africa at this time was under the Bishop of Calcutta, whose diocese effectively included the East Indies and the entire Southern Hemisphere. Bishops en route for Calcutta sometimes stopped at the Cape for confirmations, and occasionally ordination of clergy, but these visits were sporadic. It became apparent that a bishop was needed for South Africa, and in 1847 Robert Gray was consecrated as the first bishop of Cape Town in Westminster Abbey. The new bishop landed in Cape Town in 1848. 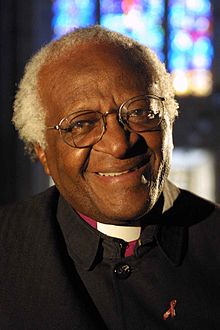 Desmond Tutu (born 1931), former Primate of the Anglican Church of the Province of South Africa, noted pacifist and a leading figure in the successful fight against apartheid

Desmond Tutu rose to worldwide fame during the 1980s as an opponent of apartheid. Tutu was elected and ordained the first black South African Anglican Archbishop of Cape Town, South Africa, and primate of the Anglican Church of Southern Africa. He received the Nobel Peace Prize in 1984, the Albert Schweitzer Prize for Humanitarianism, and the Magubela prize for liberty in 1986.

The polity of the Anglican Church of Southern Africa is Episcopalian church governance, which is the same as other Anglican churches. The church maintains a system of geographical parishes organized into dioceses. The Province is divided into various dioceses, each led by its own bishop:

Liturgy and the Anglican Prayer Book

The Anglican church was a product of the English Reformation and political contexts of the sixteenth century. Thomas Cranmer, Archbishop of Canterbury, was instrumental in determining the form Anglicanism was to take, not by writing confessional statements or significant theological treaties, but through his authoring of the Book of Common Prayer in 1549 and 1552. All expressions of Anglicanism forever after defined itself in relation to the concept of the Prayer Book, whether being faithful to the Reformed tradition or seeking different approaches. Other denominations have found unity in confessional documents, or doctrinal formularies, or a systematically articulated theology, or the pronouncements of magisterial authorities.[2]

When the work of revising the liturgy in the twentieth century was undertaken it was with the understanding that it was touching the nerve-centre of the Anglican ethos, since Anglican identity takes a more intangible form, deeply dependent upon the influence and binding effect of its liturgical worship.[3] The most recent revision of the Prayer Book resulted in the publishing of An Anglican Prayer Book (1989). The Anglican Prayer Book stands alongside the South African Book of Common Prayer (1954).[4] Both the 1989 and 1954 prayers books have the English 1662 Book of Common Prayer as a common source.

The work of the revision reflected the worldwide liturgical renewal, most notably in relation to the Roman Catholic Church as a result of decisions reached at its Second Vatican Council.[5] Another influence was the charismatic renewal, which has had a marked impact on the Anglican Church of Southern Africa.[5] Particular care was taken to meet evangelical concerns in a Province that is historically High Church rather than Low Church in its main emphasis. Theological breadth – catholic, evangelical, charismatic, and liberal – was aimed at in order to achieve balance and to accommodate these various convictions.[5]

These sensitivities and influences are most evident in the Eucharistic liturgy. Four Eucharistic prayers are given to accommodate different theological preferences. Two are taken from the Church of England, one is borrowed with permission from the Roman Catholic Canon, and pride of place is given in the First Eucharistic Prayer to an indigenous product. The influence of the liturgical movement can be seen in the overall structure and language of the Eucharist, including seeking a sense of continuity with the early, apostolic church.

In tracing this line of continuity from the Lord’s Table to the Communion Table, a prayer traditionally ascribed to Hippolytus (c215), Bishop of Rome, called the Apostolic Tradition, captured the imagination of contemporary liturgists and now appears in the modern liturgical books of different churches both Roman Catholic and Protestant.[6] The opening lines of all Four Eucharistic prayers closely mirror the wording of Hippolytus. The Fourth Eucharistic Prayer most closely maintains the link with the Hippolytus liturgy, but allows slight variation with respect to the wording of “we offer you” and “we bring before you” to accommodate different theological persuasions. This is an example of how the Anglican Church of Southern Africa in making revisions for the 1989 Anglican Prayer Book adopted a more conciliatory approach to the various ecclesiastical factions, foreshadowing the conciliatory context of South African politics in the early 90s in regard to political factions and political change.

The centre of the Anglican Church of Southern Africa's teaching is the life and resurrection of Jesus Christ. The basic teachings of the church, (contained in the catechism), include:

The threefold sources of authority in Anglicanism are scripture, tradition, and reason. These three sources uphold and critique each other in a dynamic way. This balance of scripture, tradition and reason is traced to the work of Richard Hooker, a sixteenth century apologist. In Hooker's model, scripture is the primary means of arriving at doctrine and things stated plainly in scripture are accepted as true. Issues that are ambiguous are determined by tradition, which is checked by reason.[7]

The Anglican Church of Southern Africa embraces three orders of ministry: deacon, priest, and bishop. A local variant of the Book of Common Prayer is used. The Church is known for having Anglo-Catholic leanings.