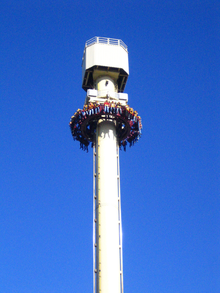 A drop tower or big drop is a type of amusement ride, based around a central structure or tower. With most drop towers, the gondola is lifted to the top of a large vertical structure, before being released and falling towards the ground. Brakes activate to slow the ride prior to reaching the ground. Some designs expand on this concept, with some designs promoting rotating gondalas or that riders be 'bounced' several times before coming to a rest.

Most parks and carnivals require riders to be 48 inches (122 cm) or taller. The fastest free-fall/drop tower in the world is an Intamin designed and manufactured ride named Giant Drop. The ride is 390 feet (119 m) high and reaches a speed of 84.375 mph (135.6 km/h), the ride is located at Dreamworld on the Gold Coast, Australia. The highest drop tower is The Big Shot which is located on the top of the Stratosphere Las Vegas casino hotel tower. The base of the ride is 921 feet (281 m) above ground with the top of the ride at 1,081 feet (329 m).

Drop towers vary in height, passenger capacity, lift type, and brake type. Many are custom made, although there are some mass-produced designs, which are listed below.