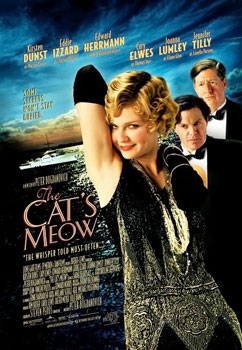 "The Cat's Meow" is a directed by . The by Steven Peros is based on his play of the same title, which was inspired by the mysterious death of film mogul .

Elinor Glyn provides the narration:"In November of 1924 during a weekend yacht party bound for San Diego a mysterious death occurred within the Hollywood community. However there was no coverage in the press, no police action, and of the 14 passengers on board only one was ever questioned by authorities. Little evidence exists now or existed at the time to support any version of those events. History has been written in whispers, and this is the whisper told most often. The yacht you see belonged to William Randolph Hearst. Only in a place like this do reporters and autograph hounds have absolutely no scruples about stampeding mourners at a funeral. Welcome to Hollywood, a place just off the coast of planet Earth. After we all leave the man in the box will disappear, just his ashes will remain, after all its fire that can hurt you, not ashes"

Several of those participating in the weekend's festivities are at a crossroads in their lives and/or careers. Chaplin, still dealing with the critical and commercial failure of "" and rumors he has impregnated sixteen-year-old , who appeared in his film "The Kid", is in the midst of preparing "". Davies longs to appear in a rather than the somber s to which Hearst has kept her confined. Ince's eponymous film studio is in dire financial straits, and he hopes to convince Hearst to take him on as a partner in Cosmopolitan Pictures. Parsons would like to relocate from the East Coast to more glamorous Hollywood.

Hearst suspects Davies and Chaplin have engaged in an affair, a suspicion shared by Ince, who hopes to find proof he can present to Hearst in order to curry favor with him. In the wastepaper basket in Chaplin's stateroom, he discovers a discarded love letter to Davies and pockets it with plans to produce it at an opportune moment. When he finally does, Hearst is enraged, and his anger is fueled further by the discovery of Davies' brooch in Chaplin's cabin. He assumes it was left there during a romantic liaison, unaware she and several other guests had gathered there the night before to indulge in and .

Armed with a pistol, Hearst searches the yacht for Chaplin in the middle of the night. He discovers Davies and Ince, who has donned the derby Chaplin had been wearing earlier, in a huddle at the bottom of a staircase leading to the boiler room. He overhears Davies tell Ince she never loved "him" and, assuming the "him" is himself, shoots Ince in the head. A stunned Davies tells Hearst he misunderstood the conversation - the "him" she meant was Chaplin.

Hearst arranges to dock in and have a waiting ambulance take the still-alive Ince to his home. He phones the injured man's wife and tells her Ince attempted when Livingston tried to end their affair, and assures her he will make sure the truth doesn't reach the media. To the rest of his guests he announces Ince's ulcer flared up during the night and he is in need of immediate medical attention. Davies, of course, knows the truth, and confides in Chaplin. Also aware of what really happened is Parsons who, having gotten up to investigate mysterious noises she heard, had witnessed the shooting. She assures Hearst his secret will be safe in exchange for a lifetime contract with the , thus laying the groundwork for her lengthy career as one of Hollywood's most powerful s.

After seeing Ince off, Hearst confronts Davies and Chaplin. Chaplin berates Hearst for what he has done and expects Davies to join him. Hearst however challenges Chaplin to guarentee Davies that he can promise her a happy life. When Chaplin fails to answer Hearst informs Chaplin of the vow of silence he and the fellow guests have made to keep the weekends activities a secret. Chaplin despairs as he feels the murder has rekindled Davies' love for Hearst

The film concludes with the guests leaving Tom Ince's funeral, as Elinor Glyn narrates what became of them:

*Marion Davies starred in more of Hearst's films before finally being allowed to feature in a comedy , which was (as Chaplin predicted) a success. She stayed by Hearst's side until his death in 1951

Tom Ince was largely forgotten after the events of his death. Very few newspapers reported it, no police action was taken, and of all the people on-board only one was ever questioned, and in Hollywood "The place just off the coast of the planet Earth" no two accounts of the story are the same

In an episode of the series "", Peter Bogdanovich and members of his cast and crew discussed the film. The director revealed he first heard the story of the weekend cruise and its consequences from thirty years before receiving the Steven Peros script. (According to the film "", Welles was told the story by , his screenwriting collaborator on "".)

Bogdanovich wanted to shoot the film in black and white to capture the feel of the silent movie era, but studio heads objected. (Black and white scenes of Ince's funeral, resembling old footage, bookend the film.) To compensate, the director ordered er Caroline de Vivaise to dress the cast in only black and white. With only a few weeks to prepare prior to the start of filming, she resorted to shopping in secondhand stores for vintage clothing. Bogdanovich agreed to her request to have some silver and gold on the costumes when many of the pieces she found were trimmed with those colors.

Composer 's score was augmented by original recordings that were popular during the period in which the film takes place. These included "Avalon," "Toot Toot Tootsie," and "California, Here I Come" by ; "Everybody Loves My Baby" and "Wild Cat Blues" by Clarence Williams; "Stumbling," "Say It With Music," "Somebody Loves Me," and "Linger Awhile" by ; and "Wabash Blues" by . In addition, Ian Whitcomb & His Bungalow Boys performed many tunes from the era, among them "Ain't We Got Fun," "I'm Just Wild About Harry," "St. Louis Blues," "A Pretty Girl Is Like a Melody," "I'm Nobody's Baby," "Rose of Washington Square," "If You Were the Only Girl in the World," "Margie," "How Ya Gonna Keep 'Em Down on the Farm (After They've Seen Paree)?," and "Alice Blue Gown."

After the film had been completed, Joel C. High realized the version of "Charleston" heard in the birthday party scene was a jazz-tinged arrangement from the 1950s and had Ian Whitcomb & His Bungalow Boys record an authentic 1920s rendition to replace it. Bogdanovich preferred the livelier, more contemporary sound of the original version but finally was convinced by High to use the more accurate recording. The film premiered at the in August 2001. It was shown at the 2001 Flanders International Film Festival in , the 2001 MIFED Film Market in , the 2002 , and the 2002 in before going into limited release in the US in April 2002.

In his review in the "", A.O. Scott called the film "a modest, restrained picture, as small and satisfying as one of 's better recent efforts. There is little to distinguish it visually from a made-for-cable historical drama. We observe the events from a polite distance, rather than being plunged into the swirl of decadent Jazz Age high life. The suave camera movements never quite dispel the feeling that we are watching a filmed play. But Mr. Bogdanovich . . . shows his mastery in his work with the actors, who turn dusty Tinseltown lore into a spry and touching entertainment." [ [http://www.nytimes.com/2002/04/12/movies/12MEOW.html "New York Times" review] ]

of the "" said, "The film is darkly atmospheric, with Herrmann quietly suggesting the sadness and obsession beneath Hearst's forced avuncular chortles. Dunst is as good, in her way, as in "" in showing a woman who is more loyal and affectionate than her lover deserves." [ [http://rogerebert.suntimes.com/apps/pbcs.dll/article?AID=/20020426/REVIEWS/204260301/1023 "Chicago Sun-Times" review] ]

In the "", stated, "Bogdanovich takes a tale of old Hollywood and infuses it with velocity and enthusiasm. He avoids his twin demons, freneticism and cuteness, and delivers his best picture in years . . . His deft use of a single location, his intelligent handling of his ensemble cast and his graceful camera work mark this as a true return to form." [ [http://www.sfgate.com/cgi-bin/article.cgi?f=/c/a/2002/04/26/DD134840.DTL "San Francisco Chronicle" review] ]

Derek Elley of "Variety" described the film as "playful and sporty" and said of Kirsten Dunst, " [She] gives her best performance to date amid a skilled older cast. Believable as both a spoiled ingenue and a lover to two very different men, Dunst endows a potentially lightweight character with considerable depth and sympathy." [ [http://www.variety.com/review/VE1117798620.html?categoryid=31&cs=1&p=0 "Variety" review] ]

In "", observed, "Elegant, funny and unexpectedly touching, this whodunit about a murder aboard the yacht of William Randolph Hearst represents a bracing comeback for Peter Bogdanovich . . . Dunst, the teen queen of "" and "", is showstoppingly good, finding humor, heart and surprising gravity in a character often dismissed as a ." [ [http://www.rollingstone.com/reviews/movie/5948465/review/5948466/the_cats_meow "Rolling Stone" review] ]

James Christopher of "" said, "The unexpected charm of Bogdanovich's film is that he paints a social scenario worthy of "". His cast are comically hollow and effortlessly insincere . . . Kirsten Dunst is a marvellous tease as Marion; Eddie Izzard is a manly Chaplin; and Herrmann is hypnotic as the infatuated host who is richer than God." [ [http://entertainment.timesonline.co.uk/tol/arts_and_entertainment/film/article438710.ece "The Times" review] ]

In the "", Kevin Thomas stated, "Peter Bogdanovich, who knows his Hollywood history probably better than any other American director, works from Steven Peros' amusing yet poignant script to tell the popular version of the legend in clever and entertaining fashion, loaded with authentic and convincing details." [ [http://www.calendarlive.com/movies/reviews/cl-movie000025986apr12,0,6507559.story "Los Angeles Times" review] ]

Ann Hornaday of the "" enthused, "What a tonic to be treated to a movie for that most uncourted, ignored and generally dissed of : the grown-ups . . . This is not a film that depends on jiggles, gross-outs or special effects. The movie unwinds at an unhurried pace and scenes are allowed to play without a lot of jangly edits and jump-cuts. People talk to each other in complete sentences. Director Peter Bogdanovich, making his first feature film in nine years, simply seeks to tell a compelling story and to tell it well. This he does, if a bit sedately." [ [http://www.washingtonpost.com/ac2/wp-dyn/A24608-2002May2 "Washington Post" review] ]