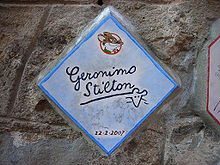 Tile of the muretto in Alassio

For the TV series of the same name, see Geronimo Stilton (TV series)

Geronimo Stilton is a best-selling children's book series published by Edizioni Piemme of Milan, Italy, since 2000. Scholastic Corporation has published the English version of the series since February 2004. Although the series credits its title character as the author, the idea was originally thought of by Elisabetta Dami.[1] On older novels, the copyright is issued to a pseudonym "Geronimo Stilton," this was changed on newer books. The books are intended for readers in the 8–16 year old age range.

In the series, the title character is a talking mouse who lives in New Mouse City on Mouse Island. A best-selling author, Geronimo Stilton[2] works as a journalist and editor for the fictional newspaper The Rodent's Gazette.

He has a younger sister named Thea Stilton,[3] a cousin named Trap Stilton,[3] and a favorite little nephew, nine-year-old Benjamin Stilton.[3] Geronimo is a nervous, mild-mannered mouse who would like nothing better than to live a quiet life, but he keeps getting involved in far-away adventures with Thea, Trap, and Benjamin. The books are written as though they are autobiographical adventure stories.

The series originated in Italy and has become the most popular children's book series in that country.[citation needed] The books have been translated into 35 languages.

Papercutz obtained the rights to publish English translations of the graphic novels of Geronimo Stilton. These retain some of the original names of the characters that were changed in the storybooks translated by Scholastic. For example,the English translations of the graphic novels by Papercutz continue to use the names "Patty Spring" and "Pandora Woz" while the storybooks by Scholastic changed these names to Petunia Pretty Paws and Bugsy Wugsy, respectively.

Geronimo Stilton, as he appears in the TV series

Geronimo Stilton: Geronimo Stilton is the editor in chief of The Rodent’s Gazette, the most famous daily newspaper on Mouse Island, but his true passion is to write books, which all become bestsellers. He likes to read books, he enjoys listening to classical music, plays golf, even collect antique, 18th century cheese rinds, of all things! He adores his work and his family, but he hates to travel, because he gets airsick, seasick and carsick. Nonetheless, he often gets involved by Thea and his relatives and friends in extreme situations and adventures all around the world.

Thea Stilton (Tea in original Italian version): Thea is Geronimo's youngest sister, a rodent with a professionally successful career, and unrepentant heart-breaker in her private life. A skilled photographer continuously in search of her latest scoop, Thea is ready to leave to exciting adventure at the mere drop of a word, and punctually returns with sensational articles and photos. She rides a motorcycle, flies a plane, loves racing cars, is a certified parachute jumper, holds a black belt in karate, and teaches survival courses. Thea can also be frivolous and teasingly spiteful, and loves the latest fashions. She has her own series, also the writer of her own series in collaboration with Geronimo, about her friends at Mouseford Academy. She is a special correspondent for The Rodent's Gazette.

Trap Stilton (Trappola in original Italian version): Trap is Geronimo's annoying cousin. He is always eating all of Geronimo's food, hence his largely rounded appearance. Trap is called obnoxious in most of the Geronimo Stilton books but appears as a very interesting character. Trap believes that he is a good cook, but Geronimo thinks otherwise. Trap is loud and obnoxious, and he always wants money. He lets Geronimo do all the work. Trap always does pranks on Geronimo, and is always signing Geronimo up for things that he does not like to do. He also has friends all over New Mouse City. He owns a shop called Cheap Junk for Less, and is living in an old train car called the Orient Express (as seen in the 32nd book, "Valley of the Giant Skeletons").

Benjamin Stilton: Benjamin is Geronimo's favorite, 9-year-old nephew. Benjamin is a sweet, polite boy. His teacher at school is Miss Angel Paws, and his best friends are Sakura and Oliver. He has a great curiosity and is surprisingly enterprising. He is always very busy jotting notes on his notepad during other adventures. His dream is to work alongside with his uncle as a successful journalist in the future. Benjamin is Geronimo's favorite rodent and is a needed character in the books. Whenever Geronimo doesn't agree about anything, only Benjamin's pleading look is needed to make him agree.

Hercule Poirat (Ficcanaso Squitt in original Italian version; Nosymouse Squeak in graphic novel): Hercule Poirat is Geronimo's mystery-loving friend. He is always pleading with Geronimo to try bananas, but Geronimo thinks otherwise. Hercule is considered to be a Master of Disguise and is one of the many rodents who likes Geronimo's sister Thea. He also appears in the 3rd graphic novel. His name comes from Agatha Christie's detective character Hercule Poirot.

Grandfather William Shortpaws (Torquato Travolgiratti in original Italian version): Geronimo's grandfather, a.k.a. "Cheap Mouse Willy" ("Grandpa Tank" in graphic novel), is a loud, strict and stingy rodent. He was the founder of The Rodent's Gazette. He listens to whatever Thea says and is always forcing Geronimo to do stuff he does not want to do. His real name is William Shortpaws, but before he was introduced as a character, the inside list of members of The Rodent's Gazette had his character shown as being named "Maximilian Mousemower". He is a major penny pincher and always loves to save money.

Professor Paws von Volt (Professor Amperio Volt in original Italian version): Professor Paws von Volt is one of Geronimo's closest friends. He is an inventor, and, among other things, creates a giant robotic cat. In the graphic novel he also invents a time machine called the Speedrat, capable for the Stilton family to foil the Pirate Cats' plans. He conducts many dangerous experiments and is always traveling places secretly. He changes the location of his lab frequently.

Sally Ratmousen (Sally Rasmaussen in original Italian version): Sally Ratmousen is the publisher of The Daily Rat, and also Geronimo's number one enemy. She would do anything to publish the oddest thing before The Rodent's Gazette does!

The Shadow (Ombra in original Italian version): The Shadow is New Mouse City's most wanted thief. She is always stealing stuff and Geronimo encountered her on several adventures, such as in The Mummy with No Name, The Mysterious Cheese Thief, Valley of the Giant Skeletons and The Giant Diamond Robbery. She is also Sally Ratmousen's cousin.

Pinky Pick: Creator of the Fur Kids Only magazine for The Rodent's Gazette. Although she is only 14-years-old, and is extremely annoying, Geronimo keeps her because she is brilliant and always comes up with creative ideas. She is Geronimo Stilton's assistant.

Creepella von Cacklefur (Tenebrosa Tenebrax in original Italian version): Creepella is a rodent who lives in Mysterious Valley. She has a crush on Geronimo and instead of a car, she drives in a hearse. She is also the writer of her own series in collaboration with Geronimo.

Aunt Sugarfur (Zia Margarina in original Italian version): Aunt Sugarfur is another one of Geronimo's favorite aunts. She used to work in the most biggest bakery in the whole world. Uncle Kindpaws (Zio Mascarpone in original Italian version) works in a toy shop down the street. They have two daughters that are twins named Squeakette and Squeaky. Geronimo's favorite thing about Aunt Sugarfur is that she always has a chocolate muffin in her bag for Geronimo.

Champ Strongpaws: An all-around star athlete. He's into the latest training trends. Champ works for a sports radio station, and loves to get lazy rodents up and running.

Bruce Hyena: A very brave friend of Geronimo. He is a super sporty rodent, and he is the rodent mice would want him by their side if there were any emergencies.

Tersilla Catardone: One of the 3 main antagonists in the graphic novel series and the book "The Grand Invasion of Topaz" (please note that Topaz is the Italian version of New Mouse City, and the book is not translated to English yet). Although she's the daughter of the ruler of the pirate cats, Catardone III, she's actually the true ruler and she seems to be the brain of the team. Evil and very sneaky, her biggest dream is to rule the world by traveling to the past and changing the course of history along with her father and their assistant, Bonzo Cat, for their own advantages, but Geronimo and the gang always stop them from doing so (by uncovering their masks literally, for the pirate cats wear mouse masks to blend in). She also disguised as Thea Stilton in the 6th graphic novel and unmasked herself, similar to the idea of The Shadow in disguising Karina von Fossilsnout in "Valley of the Giant Skeletons". She also wants to destroy Geronimo and his gang.

Catardone III: One of the 3 main antagonists in the graphic novel series and the book "The Grand Invasion of Topaz". Although he's the leader of the pirate cats, he's proven to be slow-witted and extremely bossy when it comes to telling Bonzo Cat (their assistance) what to do and how. Also, his biggest dream is similar to his daughter's.

Bonzo Cat: One of the 3 main antagonists in the graphic novel series and the book "The Grand Invasion of Topaz". He's proven to be even more slow-witted than Catardone III, but sometimes he seems to have good suggestions and has an extremely good memory (proven in the 3rd graphic novel). He's also the traveling assistant of Catardone III and Tersilla, and also probably their servant.

As well, an eighth paperback special edition, entitled Thea Stilton: Big Trouble in the Big Apple, in which the Thea Sisters go on a trip to New York, was published in September 2011.

Future Books: #48: The Mystery in Venice

The 48th book in the series is titled The Mystery in Venice. It is about Geronimo going to Venice to answer someone's call for help, and is due for release in January 2012.

As of September 2011, 8 English translations of the graphic novels have been published.

The characters of Geronimo Stilton also used their other names from the 2nd to the 6th novel.
The Secret of the Sphinx:

Following the Trail of Marco Polo:

Who Stole the Mona Lisa?:

An animated series of 26 episodes debuted in Belgium and the Netherlands on 21 September 2009. [4]

The editors at Scholastic have stopped writing more top stories since Spring 2006. In the meantime, however, the "Book Reviews" section of the site is still being updated, with summaries, book covers, and of course, reviews about each of Geronimo's latest adventures.[citation needed]