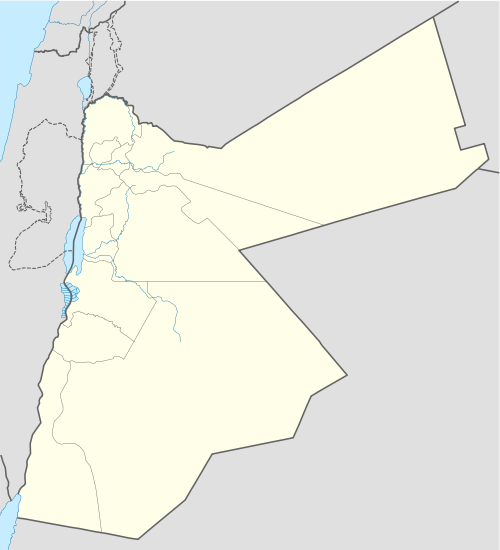 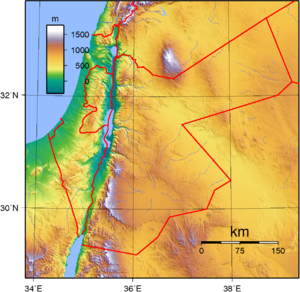 Jordan is situated geographically in Southwest Asia, south of Syria, west of Iraq northwest of Saudi Arabia and east of Israel and the West Bank; politically, the area has also been referred to in the West as the Middle or Near East. The territory of Jordan now covers about 91,880 square kilometers. Between 1950 and the Six Day War in 1967, although not widely recognized, Jordan claimed and administered an additional 5,880 square kilometers encompassing the West Bank; in 1988 and with continuing Israeli occupation, King Hussein relinquished Jordan's claim to the West Bank in favor of the Palestinians.

Jordan is landlocked except at its southern extremity, where nearly twenty-six kilometers of shoreline along the Gulf of Aqaba provide access to the Red Sea. A great north-south geological rift, forming the depression of Lake Tiberias (Sea of Galilee), the Jordan Valley, and the Dead Sea, is the dominant topographical feature.

Jordan's boundaries with Syria, Iraq, and Saudi Arabia do not have the special significance that the border with Israel does; these borders have not always hampered tribal nomads in their movements, yet for a few groups borders did separate them from traditional grazing areas and delimited by a series of agreements between the United Kingdom and the government of what eventually became Saudi Arabia) was first formally defined in the Hadda Agreement of 1925. In 1965 Jordan and Saudi Arabia concluded a bilateral agreement that realigned and delimited the boundary. The realignment resulted in some exchange of territory, and Jordan's coastline on the Gulf of Aqaba was lengthened by about eighteen kilometers. The new boundary enabled Jordan to expand its port facilities and established a zone in which the two parties agreed to share petroleum revenues equally if oil were discovered. The agreement also protected the pasturage and watering rights of nomadic tribes inside the exchanged territories. 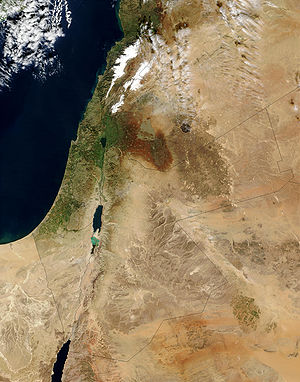 Jordan and surrounding area. Countries pictured (clockwise from upper left) are Lebanon, Syria, Iraq, Saudi Arabia, Egypt (across the Gulf of Aqaba), Israel, and the disputed West Bank, with Jordan in the center. The lush, green vegetation along the Mediterranean coast and surrounding the Sea of Galilee in northern Israel and southern Syria stands in marked contrast to the arid landscape elsewhere. Within Lebanon and on its border with Syria, the bright white is snow covering the mountain peaks of Mount Lebanon and Mount Hermon. In the bottom right, a few scattered plots of green stand out against the orange sands of the deserts of Saudi Arabia. 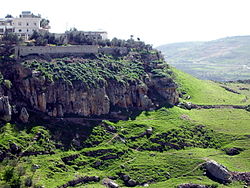 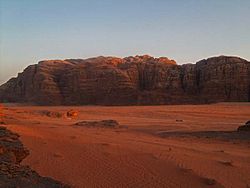 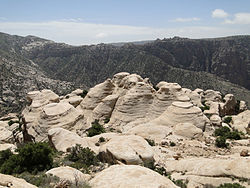 The country consists mainly of a plateau between 700 and 1,200 meters high, divided into ridges by valleys and gorges, and a few mountainous areas. Fractures of the Earth's surface are evident in the great geological rift that extends southward from the Jordan Valley through the Gulf of Aqaba and the Red Sea, gradually disappearing south of the lake country of East Africa. Although an earthquake-prone region, as of early 1989 no severe shocks had been recorded for several centuries.

By far the greatest part of the East Bank is desert, displaying the land forms and other features associated with great aridity. Most of this land is part of the great Syrian (or North Arabian) Desert (see fig. 4). There are broad expanses of sand and dunes, particularly in the south and southeast, together with salt flats. Occasional jumbles of sandstone hills or low mountains support only meager and stunted vegetation that thrives for a short period after the scanty winter rains. These areas support little life and are the least populated regions of Jordan.

The drainage network is coarse and incised. In many areas the relief provides no eventual outlet to the sea, so that sedimentary deposits accumulate in basins where moisture evaporates or is absorbed in the ground. Toward the depression in the western part of the East Bank, the desert rises gradually into the Jordanian Highlands—a steppe country of high, deeply cut limestone plateaus with an average elevation of about 900 meters. Occasional summits in this region reach 1,200 meters in the northern part and exceed 1,700 meters in the southern part; the highest peak is Jabal Ramm at 1,754 meters (though the highest peak in all of Jordan is Jabal Umm al Dami at 1854 meters. It is located in a remote part of southern Jordan). These highlands are an area of long-settled villages. Until about the 1940s, persons living in these villages depended upon rain-fed agriculture for their livelihood.

The western edge of this plateau country forms an escarpment along the eastern side of the Jordan River-Dead Sea depression and its continuation south of the Dead Sea. Most of the wadis that provide drainage from the plateau country into the depression carry water only during the short season of winter rains. Sharply incised with deep, canyonlike walls, whether wet or dry the wadis can be formidable obstacles to travel.

The Jordan River is short, but from its mountain headwaters (approximately 160 kilometers north of the river's mouth at the Dead Sea) the riverbed drops from an elevation of about 3,000 meters above sea level to more than 400 meters below sea level. Before reaching Jordanian territory the river forms the Sea of Galilee, the surface of which is 212 meters below sea level. The Jordan River's principal tributary is the Yarmouk River. Near the junction of the two rivers, the Yarmouk forms the boundary between Israel on the northwest, Syria on the northeast, and Jordan on the south. The Az Zarqa River, the second main tributary of the Jordan River, rises and empties entirely within the East Bank.

A 380-kilometer-long rift valley runs from the Yarmouk River in the north to Al Aqaba in the south. The northern part, from the Yarmouk River to the Dead Sea, is commonly known as the Jordan Valley. It is divided into eastern and western parts by the Jordan River. Bordered by a steep escarpment on both the eastern and the western side, the valley reaches a maximum width of twenty-two kilometers at some points. The valley is properly known as the Al Ghawr (the depression, or valley, also seen as Al Ghor).

The Dead Sea occupies the deepest depression on the land surface of the earth. The depth of the depression is accentuated by the surrounding mountains and highlands that rise to elevations of 800 to 1,200 meters above sea level. The sea's greatest depth is about 430 meters, and it thus reaches a point more than 825 meters below sea level. A drop in the level of the sea has caused the former Lisan Peninsula to become a land bridge dividing the sea into separate northern and southern basins. 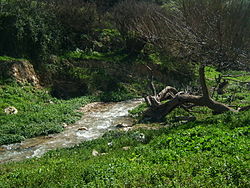 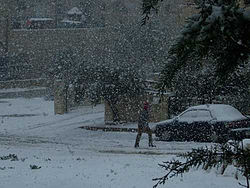 The major characteristic of the climate is the contrast between a relatively rainy season from November to April and very dry weather for the rest of the year. With hot, dry, uniform summers and cool, variable winters during which practically all of the precipitation occurs, the country has a Mediterranean-style climate. In general, the farther inland from the Mediterranean Sea a given part of the country lies, the greater are the seasonal contrasts in temperature and the less rainfall. Atmospheric pressures during the summer months are relatively uniform, whereas the winter months bring a succession of marked low pressure areas and accompanying cold fronts. These cyclonic disturbances generally move eastward from over the Mediterranean Sea several times a month and result in sporadic precipitation.

The country's long summer reaches a peak during August. January is usually the coolest month. The fairly wide ranges of temperature during a twenty-four-hour period are greatest during the summer months and have a tendency to increase with higher elevation and distance from the Mediterranean seacoast. Daytime temperatures during the summer months frequently exceed 36 °C (96.8 °F) and average about 32 °C (89.6 °F). In contrast, the winter months—November to April—bring moderately cool and sometimes cold weather, averaging about 13 °C (55.4 °F). Except in the rift depression, frost is fairly common during the winter, it may take the form of snow at the higher elevations of the north western highlands. Usually it snows a couple of times a year in western Amman.

For a month or so before and after the summer dry season, hot, dry air from the desert, drawn by low pressure, produces strong winds from the south or southeast that sometimes reach gale force. Known in the Middle East by various names, including the khamsin, this dry, sirocco-style wind is usually accompanied by great dust clouds. Its onset is heralded by a hazy sky, a falling barometer, and a drop in relative humidity to about 10 percent. Within a few hours there may be a 10 °F (5.56 °C) to 15 °F (8.33 °C) rise in temperature. These windstorms ordinarily last a day or so, cause much discomfort, and destroy crops by desiccating them.

The shamal, another wind of some significance, comes from the north or northwest, generally at intervals between June and September. Remarkably steady during daytime hours but becoming a breeze at night, the shammal may blow for as long as nine days out of ten and then repeat the process. It originates as a dry continental mass of polar air that is warmed as it passes over the Eurasian landmass. The dryness allows intense heating of the Earth's surface by the sun, resulting in high daytime temperatures that moderate after sunset. 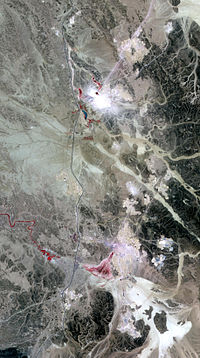 Phosphate Mines in Jordan, east of the southerly Dead Sea