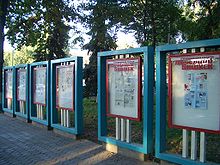 In a Soviet tradition, newspapers are posted for everyone to read for free on Bishkek's Erkindik Blvd.

The media of Kyrgyzstan experience greater freedom compared to neighbouring countries in the region[1], and the constitution guarantees freedom of the press and prohibits censorship.[2] However, the media are still restricted by the government.

In 2003, eight of Kyrgyzstan’s 25 to 30 newspapers and magazines were state-owned, and the state publishing house, Uchkun, was the major newspaper publisher in the country.[2]

Competition among media outlets is skewed by heavy government support of pro-government newspapers and broadcast outlets.[2] In the early 2000s, an increasing number of such outlets were controlled by individuals with ties to the government.[2] There is currently a mixture of 8 state owned and 20 private television networks in Kyrgyzstan, where the government restricts broadcasts and has in the past, imtimidated or shut down private networks such as NTS which aired opposition protests[3]. There are 23 FM radio stations and a total of 13 AM stations. The state-owned media is dominant, and moves to privatise it by the opposition were blocked by President Kurmanbek Bakiyev, given the political climate in the country.[3] However coverage is limited, especially in the south of the country. Most private networks are based in the capital, Bishkek. There were 187.6 television sets per 1,000 population in 2004; no statistics were available on radio use.[2]

Like television and radio, news media are restricted in what they can report and are rarely critical of the government. Journalists in the past have been harassed and intimidated who were both pro and anti-government, and protested when the President took the role of deputy director at the state run Kyrgz National TV and Radio Broadcasting Corporation.[4]. There is a mixture of state owned and private agencies, in Kyrgz, Russian and English languages.[1] Libel is a punishable offence, though it is unevenly enforced.[3]

After the change of government in 2005, opposition views generally received more exposure in the media than before.[2] However, access to the mass media by opposition spokespersons remained limited.[2]

Although only 5 percent of the population (298,100 in 2006) regularly access to the internet currently, it is lively, varied and open with blogs, forums and internet news sites for political discussion. However, it is yet to make a significant impact in the country.[3]