Englewood Cliffs is a borough in Bergen County, New Jersey, United States. As of the 2010 census, the borough population was 5,281.[6] The borough houses the world headquarters of CNBC and the American headquarters of Unilever, and is home to both Ferrari and Maserati North America.[11][12]

Englewood Cliffs was formed as a borough on May 10, 1895, from portions of Englewood Township and Palisades Township, based on the results of a referendum held the previous day.[13][14] 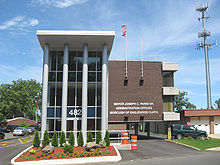 Englewood Cliffs is governed under the Borough form of New Jersey municipal government. The government consists of a Mayor and a Borough Council comprising six council members, with all positions elected at large. A Mayor is elected directly by the voters to a four-year term of office and only votes to break a tie. The Borough Council consists of six members elected to serve three-year terms on a staggered basis, with two seats coming up for election each year.[1][25]

On the local level, Englewood Cliffs has predominantly elected Democratic candidates for the past 30 years. Historically a number of notable local Republicans have consistently challenged the Democrats. Included among these are Robert Agresta, Eric Petrone, Diane Sank and Angelo Mungioli.[citation needed]

The school district has a sending/receiving relationship with the Englewood Public School District that enables students to attend public high school at Dwight Morrow High School in Englewood.[51] 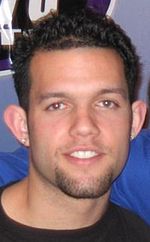 Notable current and former residents of Englewood Cliffs include: