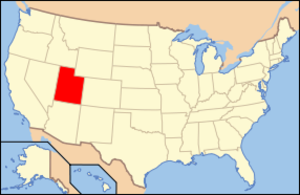 mapsize1 =
map_caption1 = Location of Utah in the United States
image_dot_

There were 226 households out of which 46.9% had children under the age of 18 living with them, 78.8% were married couples living together, 6.6% had a female householder with no husband present, and 13.3% were non-families. 12.4% of all households were made up of individuals and 7.1% had someone living alone who was 65 years of age or older. The average household size was 3.32 and the average family size was 3.64.

[http://www.besd.net/century/index.htm Century Elementary's] principal is Colleen Shaffer and holds roughly 500 students. There will be new classrooms (for the 5th graders who last year where in portables), a new bathroom, and a new library. They are also remodeling the school.

There is one church and is owned by the . It has an organ and several pianos. Visitors are welcome.

The town park is located east of the church. It includes two fields, a big toy, a corral, a stage, a gazebo, and a small shop used on special occasions.

There are two buildings in excess of 100 years old. An old town hall that used to served as a post office as well and an old shop.

The Country Archer's, usually called The Little Store by locals, is the only shop.

The is the third of its kind. The first was the old town hall until it reached its limit according to the 2001 poll, 17% of people said that they preferred to use the internet instead of paying for postage and mailing a letter, but only a third of the 17% said they had a computer. The second was just one lot east of the current position until it burned down. There is a new City Civic Center west of the church and adjacent to the post office.