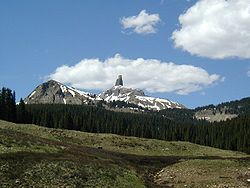 The route begins in the south at its intersection with U.S. Highway 160 in the eastern portion of the city of Cortez. The route winds northward through the towns of Dolores, Rico, Sawpit, Placerville, Norwood, and Redvale before terminating at the junction with State Highway 141 about four miles (6 km) east of Naturita. Just north of its midpoint between Rico and Sawpit, the road also passes very near and provides access to the town of Telluride.