Windows Live OneCare (previously known as Windows OneCare Live and formerly code named A1) was a computer security and performance enhancement service developed by Microsoft for Microsoft Windows. A core technology of OneCare was the multi-platform RAV (Reliable Antivirus),[1] which Microsoft purchased from GeCAD Software Srl in 2003,[2] but subsequently discontinued.[3] The software has been available as an annual paid subscription, which could be used on up to three computers.

On 18 November 2008, Microsoft announced that Windows Live OneCare would be discontinued on 30 June 2009 and will instead be offering users a new free anti-malware suite called Microsoft Security Essentials to be available before then. However, virus definitions and support for OneCare will continue until a subscription expires.[4] In the end-of-life announcement, Microsoft noted that Windows Live OneCare would not be upgraded to work with Windows 7 and would also not work in Windows 7 XP Mode.[5]

Microsoft designed OneCare as part of a cloud-based computing service named Windows Live (see official ideas website). Windows Live OneCare entered a beta state in the summer of 2005. The managed beta program was launched before the public beta, and was located on BetaPlace, Microsoft's former beta delivery system. On 31 May 2006, Windows Live OneCare made its official debut in retail stores in the United States.[6]

The beta version of Windows Live OneCare 1.5 was released in early October 2006 by Microsoft. Version 1.5 was released to manufacturing on 3 January 2007 and was made available to the public on 30 January 2007. On 4 July 2007, beta testing started for version 2.0, and the final version was released on 16 November 2007.

Windows Live OneCare currently features an integrated anti-virus, firewall, backup and restore utility, and a tune-up utility with the integrated functionality of Windows Defender for malware protection. The future addition of a registry cleaner was considered[8] but not added because "there are not significant customer advantages to this functionality".[9] Version 2 has features such as multi-PC and home network management, printer sharing support, start-time optimizer, proactive fixes and recommendations, monthly reports, centralized backup, and online photo backup.[10]

Windows Live OneCare is built for ease-of-use and is designed for home users. OneCare also attempts a very minimal interface to lessen user confusion and resource use.[citation needed] It adds an icon to the notification area that tells the user at a glance the status of the system's health by using three alert colors: green (good), yellow (fair), and red (at risk).[11]

Version 1.5 of OneCare is only compatible with the 32 bit versions of Windows XP and Windows Vista.[12] Version 2 of OneCare supports 64 bit compatibility to Vista. In version 2.5, Microsoft released Windows Live OneCare for Server which supports Windows Server 2008 Standard 64-bit and Windows Small Business Server 2008 Standard and Premium editions. No edition of OneCare operates in safe mode. Windows Live OneCare will not support Windows 7 as its development has been discontinued and replaced by Microsoft Security Essentials.

Windows Live OneCare requires users to activate the product if they wish to continue using it after the free trial period (90 days). This can only be achieved by having a valid Windows Live ID so that an association can be made between the account and the subscription to OneCare which has been purchased. When the product is activated, the grey message bar at the top of the program disappears, and the subscription is fully activated for 1 year from the date of activation. Users can check the status of their subscription on the Billing page at http://billing.microsoft.com/

Windows Live OneCare does not require the operating system to be checked with Windows Genuine Advantage before, during or after installation. The program can simply be installed from a stub downloaded from the http://onecare.live.com/ website or as CD media.[13]

Windows Live OneCare Protection Plus is the security component in the OneCare suite. It consists of three parts:

From Windows Live OneCare 1.5 onwards also monitors Internet Explorer 7 and 8 security settings and ensures that the automatic website checking feature of the Phishing Filter is enabled. 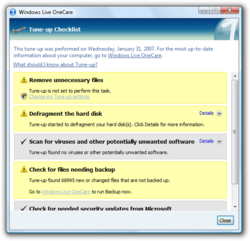 Windows Live OneCare Performance Plus is the component that performs monthly PC tune-up related tasks, such as:

Windows Live OneCare Backup and Restore is the component that aids in backing up important files. Files can be backed up to various recordable media, such as external hard disks, CDs, and DVDs. When restoring files, the entirety or a subset of them can also be restored to a networked computer, as long as it's running OneCare as well. The Backup and Restore component supports backup software features such as incremental backups and scheduling. 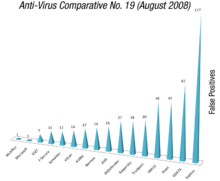 Windows Live OneCare has been criticized from both users and competing security software companies.

Microsoft's acquisition of GeCAD RAV, a core technology of OneCare, and their subsequent discontinuation of that product, deprived the GNU/Linux platform (and others) of one of its leading virus scanning tools for e-mail servers, bringing Microsoft's ultimate intentions into question.[3]

On 26 January 2006, Windows Live OneCare was criticized by Foundstone (a division of the competing McAfee antivirus) for the integrated firewall having default white lists which allow Java applications and digitally signed software to bypass user warnings, since neither of those applications carry assurances that they will not have security flaws or be written with a malicious intent.[14] Microsoft has since responded to the criticism, justifying their decision in that Java applications are "widely used by third party applications, and is a popular and trusted program among our users", and that "it is highly unusual for malware to be signed."[15]

Windows Live OneCare has also been criticized for the lack of adherence to industry firewall standards concerning intrusion detection. Tests conducted by Agnitum (the developers of Outpost Firewall) have shown OneCare failing to detect trojans and malware which hijack applications already resident on an infected machine.[16]

AV-Comparatives.org also released results that placed Windows Live OneCare last in its testing of seventeen anti-virus products.[19][20] In response, Jimmy Kuo of the Microsoft Security Research and Response (MSRR) team pledged to add "truly important" ("actively being spread") malware as soon as possible, while "[test detection] numbers will get better and better" for other malware "until they are on par with the other majors in this arena." He also expressed confidence in these improvements: "Soon after, [other majors] will need to catch up to us!"[21]

As of April 2008, Windows Live OneCare has passed the VB100 test under Windows Vista SP1 Business Edition.[22] As of August 2008, Windows Live OneCare placed 14th out of 16 anti-virus products in on-demand virus detection rates. On the other hand, as of May 2009, Windows Live OneCare placed 2nd in a proactive/retrospective performance test conducted by AV-Comparatives.[23] AV-Comparatives.org, the test issuer, denotes that it had "very few false alarms, which is a very good achievement." The publisher also points out that false positives can cause as much harm as genuine infections, and furthermore, anti-virus scanners prone to false alarms essentially achieve higher detection scores.[24]