The Tree Pangolin (Manis tricuspis) is one of eight extant species of pangolin ("scaly anteater") and is native to equatorial Africa. Also known as the White-bellied Pangolin or Three-cusped Pangolin, it is the most common of the African forest pangolins.

The Tree Pangolin belongs to the subgenus Phataginus and some authorities elevate Phataginus to genus status. Two subspecies were recognized in 1972 by Meester: 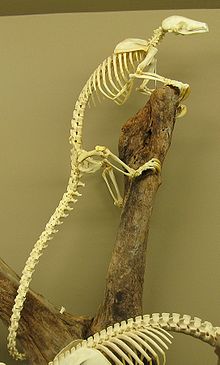 A Tree Pangolin Skeleton on Display at The Museum of Osteology.

The Tree Pangolin ranges from Guinea through Sierra Leone and much of West Africa to Central Africa as far east as extreme southwestern Kenya and north-western Tanzania. To the south it extends to northern Angola and north-western Zambia. It has been found on the Atlantic island of Bioko, but there are no confirmed records of a presence in Senegal, The Gambia or Guinea-Bissau[5].

the Tree Pangolin is semi-arboreal and generally nocturnal. It is found in lowland tropical moist forests (both primary and secondary), as well as savanna/forest mosaics. It probably adapts to some degree to habitat modification as it favours cultivated and fallow land where it is not aggressively hunted (e.g., abandoned or little-used oil palm trees in secondary growth). 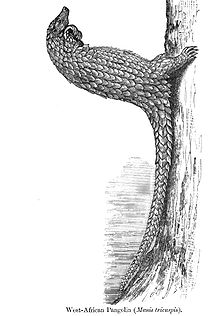 The Tree Pangolin can walk on all fours or on its hind legs using its prehensile tail for balance. It can climb up trees in the absence of branches. When walking on all fours, it walks on its front knuckles with its claws tucked underneath in order to protect them from wearing down. Its anal scent glands disperse a foul secretion much like a skunk when threatened. It has a well-developed sense of smell, but, as a nocturnal animal, it has poor eyesight. Instead of teeth it has a gizzard-like stomach full of stones and sand it ingests. The Tree Pangolin in Africa fills its stomach with air before entering water to aid in buoyancy for well-developed swimming.

The Tree Pangolin has many adaptations. When threatened it rolls up into a ball, protecting itself with its thick skin and scales. Its scales cover its entire body except for the belly, snout, eyes, ears, and undersides of the limbs. When a mother with young is threatened, it rolls up around the young, which also roll into a ball. While in a ball, it can extend its scales and make a cutting action by using muscles to move the scales back and forth. It makes an aggressive huff noise when threatened, but that is the extent of its noise making.

The Tree Pangolin eats insects such as ants and termites from their nests, or the armies of insects moving on the trees. It relies on its thick skin for protection, and digs into burrows with its long, clawed forefeet. It eats between 5 and 7 ounces (150 to 200 g) of insects a day. Pangolins use their 10 to 27 inch (250 to 700 mm) tongue which is coated with gummy mucus to funnel the insects into their mouth. The tongue is actually sheathed in the chest cavity all the way to the pelvic area.

Female pangolin territories are solitary and small, less than 10 acres (40,000 m²), and they rarely overlap. Males have larger territories, up to 60 acres (200,000 m²), which overlap many female territories, resulting in male/female meetings. These meetings are brief unless the female is in breeding condition. When males and females meet while the female is in breeding condition mating occurs. Gestation of young occurs for 150 days and one young per birth is normal. The young pangolin is carried on its mother's tail until it is weaned after three months, but it will remain with its mother for five months in total. At first the newborn's scales are soft, but, after a few days, they start to harden. In captivity, females have been known to adopt the young of others.

The Tree Pangolin is subject to widespread and often intensive exploitation for bushmeat and traditional medicine, and are by far the most common of the pangolins found in African bushmeat markets. Conservationist believe that this species has undergone a decline of 20-25% over the past 15 years (three pangolin generations) due mainly to the impact of the bushmeat hunting. They assert that it continues to be harvested at unsustainable levels in some of its range and have recently elevated its status from "Least Concern" to "Near Threatened".