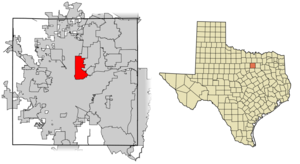 There were 14,922 households out of which 33.7% had children under the age of 18 living with them, 49.4% were married couples living together, 12.0% had a female householder with no husband present, and 33.0% were non-families. 27.1% of all households were made up of individuals and 8.0% had someone living alone who was 65 years of age or older. The average household size was 2.61 and the average family size was 3.19.

The consists of approximately 80 sworn police officers that service the city via patrol units in police cruisers and are supplemented by patrol supervisors and specialized units. Click [http://www.haltomcitytx.com/police here] to visit the HCPD site.

Most of Haltom City is served by the (BISD), however some portions are served by the and Keller Independent School District as well. Haltom City has seven BISD elementary schools, two middle schools, one high school and an alternative school within its boundaries.