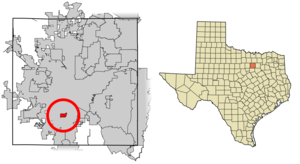 There were 997 households out of which 23.2% had children under the age of 18 living with them, 66.0% were married couples living together, 8.5% had a female householder with no husband present, and 22.5% were non-families. 19.5% of all households were made up of individuals and 10.5% had someone living alone who was 65 years of age or older. The average household size was 2.56 and the average family size was 2.93.

The City of Edgecliff Village is experiencing its last large growth spurt, as the remaining convert|206|acre|km2|1 of open prairie are developed for building single-family homes. After this area is built out, there is little open land for housing in the Village. This area was held for many years by and purchased from the Hunt family of Texas.

The location of Edgecliff Village is convenient to Interstate 35 West and Interstate 20 (also Loop I-820). The largest business in the Village is the "Fort Worth Star-Telegram", which maintains a printing plant within city limits. The tax rate in Edgecliff Village is lower than in surrounding communities, but there are few amenities (no public library access, no park development to speak of).

Edgecliff Village is served by the Crowley and Fort Worth Independent School Districts.