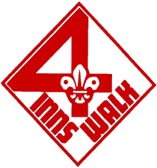 name = Four Inns Walk
location = Derbyshire
country = England
f-date = 1957 -The Four Inns Walk is a hiking event held annually (usually at Easter) over the high moorlands of the Northern . It takes place mainly in (though it starts in and, near the end, makes makes a short detour into ), in northern . It is organised by . It is a competitive event, without an overnight camp (although teams must be equipped to bivouac if the conditions are severe enough to warrant it). It was first held as a event in 1957, but is now open to other teams of experienced hill walkers and fell runners.

The event is undertaken in teams of three or four, for safety reasons, and at least two of these team members must be at least 17 (the others may be 16) on the day of the event. An amount of equipment must be carried by the team, including s, , a , and a group shelter. Any member of a team is allowed to drop out at any point, but the rest of the team will not be permitted to continue the event unless they are in a group of not less than 3, or more than 7 people (which can be formed by combining two groups together). The remaining team members must still carry all of the safety equipment. Any team that has not reached the checkpoint at before 21:15 will not be allowed to complete the rest of the event. No dogs are allowed to accompany the walkers. [ [http://www.dynarx.eclipse.co.uk/fourinns/rules.html Four Inns Rules] ]

The 45-mile (72km) hike starts at the local church of . The first of the 12 checkpoints is the derelict 'Isle of Skye' Inn, then the route heads south, crossing the flanks of Black Hill. Next, it passes through Hey Moss, Crowden, Tor Side, , and Doctor's Gate to the 'Snake (Pass) Inn'. The next checkpoint is over the Kinder plateau to the 'Nag's Head' Inn in . The route then passes though , White Hall, and the Goyt Valley to the 'Cat and Fiddle' Inn, finally descending to for the finish. [ [http://www.dynarx.eclipse.co.uk/fourinns/route_info.html The Route and Walking Information ] ] Usually, two thirds of the teams finish the event, in times between 8 and 16 hours (the course record of 7 hours 9 minutes was set in 1989). However, some teams take longer than this, and some have taken over 20 hours. [http://www.dynarx.eclipse.co.uk/fourinns/results/complete_2006.pdf] At most of the checkpoints, hot drinks and sandwiches will be given to the competitors, and several Mountain Rescue teams are on hand to ensure their safety.

A number of trophies are available for teams that complete the event. [ [http://www.dynarx.eclipse.co.uk/fourinns/trophies.html The Trophies ] ] These are:

Three , aged 19, 21, and 24, from the Rover Crew, were killed in the event. Travelling lightly laden and without support, they were overtaken by deteriorating weather, including 30mph winds, heavy rain, and temperatures from 0 to 7oC above the Snake Pass. The youngest of the group got into trouble in the upper reaches of the Alport Valley, and had been brought down to Alport Castles Farm by the Glossop Rover Crew. He was taken to hospital but died later. The other two scouts who died were in a separate group, but in the same area. A third member of that group was found in the Alport and taken to safety, but he was unable to give accurate information about where the rest of the group were. Because of the worsening weather, the search had to be called off during the night, but it was resumed on Sunday morning. However, it was not until Monday afternoon that the first body was recovered. By Tuesday, 370 people were involved with the search and the second body was recovered later that morning. [ [http://www.buxtonmrt.org.uk/team_peak.htm Mountain rescue in the Peak District] ] (In that year, when the event fell in mid-March, only 22 of the initial field of over 240 finished).

An MRC (Medical Research Council) respiration and metabolism project, devised to identify the metabolic and biochemical basis for this tragedy, was performed during the 1965 event, with young volunteers. [ [http://www.peakdistrictonline.co.uk/content.php?categoryId=2051 The Peak District Mountain Rescue Organisation] ]